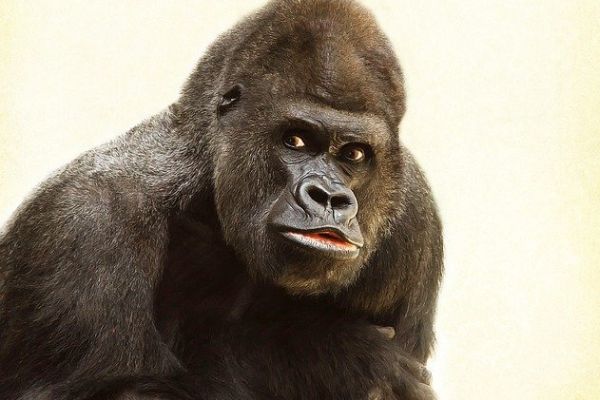 Gorillas are powerful primates that are a part of the ape family. While gorillas are often described as silverbacks, the silverback gorilla isn’t actually a gorilla species! Male gorillas are sometimes called silverbacks because they develop a streak of silver fur on their backs as they age!

It’s clear that silverback gorillas are strong, but just how strong are they? Read on to learn more about what these brawny great apes can do!

How Strong Is a Silverback Gorilla?

The silverback gorilla has incredible strength. It’s capable of lifting and throwing up to 1,800 pounds, making it as strong as 13 humans! In addition to having strong arms, silverback gorillas have large hands and powerful legs that contain 42.5% of the animal’s muscle mass.

Silverback gorillas have very strong bodies, but they also have powerful jaws, with a bite force of up to 1,300 PSI! Inside a gorilla’s mouth, you’ll find large, sharp canine teeth that can be as long as two inches. For the most part, gorillas only display their fangs to ward off threats, but they can do some real damage with their bite.

While all gorillas are strong, the western lowland gorilla is considered to be the strongest subspecies. These gorillas can stand up to 6 feet tall and can weigh as much as 500 pounds!

If you’ve ever seen a gorilla at the zoo, it’s very likely that you saw a western lowland gorilla! This subspecies is the only type of gorilla that’s kept in captivity in most parts of the world. 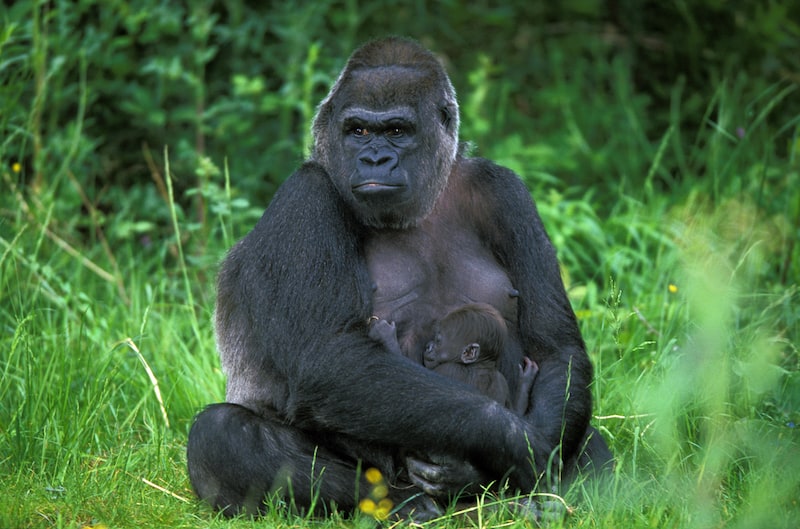 Gorillas are herbivores, which means they primarily eat vegetation. Since the silverback gorilla doesn’t have to hunt for prey, its strength mostly comes from its massive body. Other predators that live alongside gorillas, like cheetahs and crocodiles, usually won’t mess with silverback gorillas.

How Strong Is a Silverback Gorilla’s Punch?

A silverback gorilla has a punch that’s strong enough to break bones. Depending on the size of the gorilla, silverbacks can have a punch force as high as 2,700 pounds.

The impact of this punch can be as high as 12,500 lb.-ft./s. One punch from a silverback gorilla is equivalent to 30 punches from a human of average strength.

Gorillas also have very large hands, which give them an extremely powerful grip. A silverback gorilla is capable of crushing many objects with its bare hands!

On average, the hands of a silverback gorilla measure 12×6 inches. In comparison, adult males have an average hand size of 7.6×3.5 inches.

Is a Silverback Gorilla Stronger Than a Bear?

Silverback gorillas can be stronger than bears, but that depends on the bear species. Even though gorillas are extremely strong, they’re outmatched by the strongest bear species, like the polar bear and grizzly bear. These large bears are larger and faster than gorillas, which allows them to strike with more force.

With that said, if a silverback was the same size as a grizzly bear, it would actually be the stronger animal! The silverback gorillas can lift more than twice their body weight, but a grizzly bear can only lift 0.8 times its body weight. This is also why gorillas are stronger than smaller bear species, like the brown bear.

You may also like:  How Strong Are Baboons? (Comparisons)

Bears are also outmatched by gorillas when it comes to jaw strength. A grizzly bear’s bite force is around 975 PSI, which can’t compare to the silverback gorilla’s 1,300 PSI bite force. Even polar bears, which have the strongest jaws of all bears, have a bite force of 1,200 PSI.

So which animal would win in a fight? If a silverback gorilla were to face off against a grizzly or polar bear, it’s safe to assume that the bear would be the winner. However, if a gorilla faced off against any other species of bear, it’s likely that its strong arms and jaws would make it the winner.

What Animals Are Stronger Than a Silverback Gorilla?

There aren’t many animals that can outmatch the silverback gorilla, but it does have some competitors. Along with polar bears and grizzly bears, elephants are stronger than gorillas. African elephants are the world’s strongest mammals and can lift nearly 20,000 pounds!

Although some of these animals are larger than gorillas, the silverback gorilla isn’t the strongest animal based on its size either. Surprisingly, that honor goes to the dung beetle, which can lift more than 1,100 times its body weight. As strong as gorillas are, there are creatures in the animal kingdom that are even stronger.