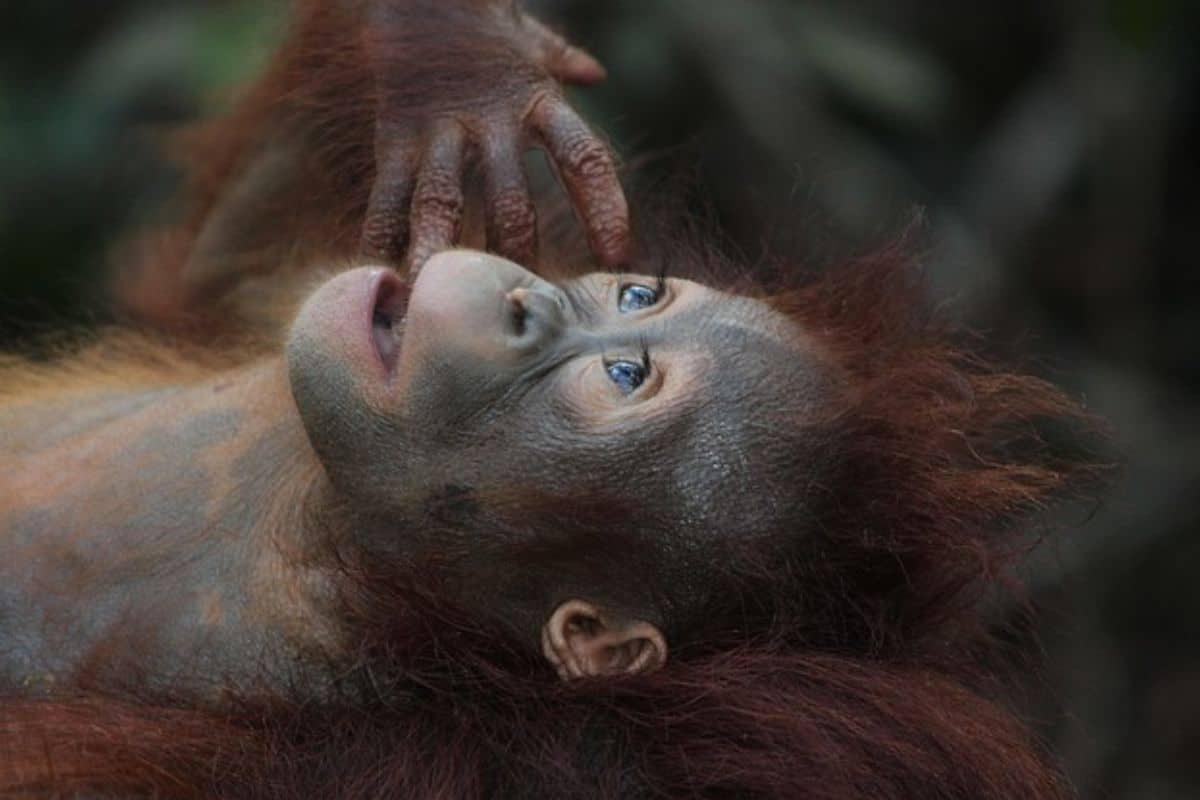 Orangutans are large, tree-dwelling apes. These mammals live in the tropical rainforests of Sumatra and Borneo in Southeast Asia. An orangutan’s lifespan in the wild is between 30-40 years, but they can live up to 60 years in captivity.

Their diet consists of mostly fruits and leaves, though they are considered omnivores since they also consume insects. Full-grown orangutans measure between 4 and 5 feet and weigh anywhere from 82 to 220 pounds. More impressively, their arm span from fingertip to fingertip stretches up to six and a half feet!

These large animals are characterized by their red fur and long, strong arms, but the question remains: how strong are orangutans?

How Strong Are Orangutans?

Orangutans are a sexually dimorphic species meaning the difference in size and shape between the males and females is significant. While male orangutans often weigh over 200 pounds and reach a height of 5 feet, female orangutans are much smaller.

If females weren’t so much smaller than the males, there might not be such a difference in strength, but as it is, male orangutans are much stronger than their female counterparts.

How strong are orangutans compared to chimpanzees?

Chimpanzees and orangutans are generally similar in size, but that doesn’t mean that their strengths are the same. While an orangutan can lift up to 500 pounds, a chimpanzee can only lift about 250 pounds.

How strong are orangutans compared to humans?

While the orangutan is one of human’s most closely related relatives, orangutans are around five to seven times stronger than people. Orangutans can lift up to 500 pounds; for the average orangutan, this is three times their weight. While men and women bodybuilders can lift upwards of 1,000 pounds, the average human can only lift between 135 and 175 pounds.

You may also like:  How Strong Are Grizzly Bears? (Compared)

The average human male has a grip strength of up to 73 pounds, but an orangutan’s grip strength is 600 pounds, so there’s no contest. The fact of the matter is, if it came down to a human vs. orangutan fight, the orangutan would almost definitely win.

Which is stronger? An orangutan or a gorilla?

A silverback gorilla can lift up to 1,800 pounds! That’s more than three times as much as the average orangutan. Bite strength is another category in which gorillas best orangutans. A gorilla’s bite strength is up to 1,300 pounds per square inch compared to the orangutan’s 575 pounds per square inch. Gorillas and orangutans are similar in size, but gorillas are stockier and much stronger.

Orangutans are extremely large and strong apes with disproportionately long arms. Their arms are about one and half times longer than their legs. Orangutans’ tree-dwelling tendencies serve to increase their arm strength.

Because orangutans spend most of their time swinging from branch to branch, they regularly build their arm and hand strength, which explains their lifting and grip power.

Orangutans tend to be mild-mannered and are not typically aggressive, but their strength and bite force make them formidable opponents if they choose to attack.