If you’re a gardener, or if you spend a lot of time outdoors, you’ve probably run into a garter snake before.

These guys are on the small to medium end of the snake spectrum, and are one of the most common types of snakes found throughout the United States and North America. They’re found plentifully on the eastern coast of the US, and are even the state reptile of Massachusetts.

They live in a wide variety of habitats including grasslands, woodlands, meadows, forests, and even suburbs. You’re likely to find them near bodies of water — they are excellent swimmers and catch the prey that lives here such as amphibians and small fish.

While there are a few different variations of coloration and pattern, most have stripes that run the length of their bodies as well as a ridge along their backs. Common colors for garter snakes include brown, yellow, black, green, and orange.

While most snakes that possess toxins are venomous, the garter snake is actually poisonous in addition to being mildly venomous.

This means that you should not eat a garter snake, as they carry toxins in their body which would transfer to you.

These toxins come from the prey garter snakes eat, specifically the rough-skinned newt and American toad. Garter snakes are immune to the poisons of these animals and absorb toxins into their bodies as a survival adaptation.

In this way, the garter snake is very unique. It uses its venom to take down prey, but also uses the absorbed toxins from other animals as a means of deterring predators. 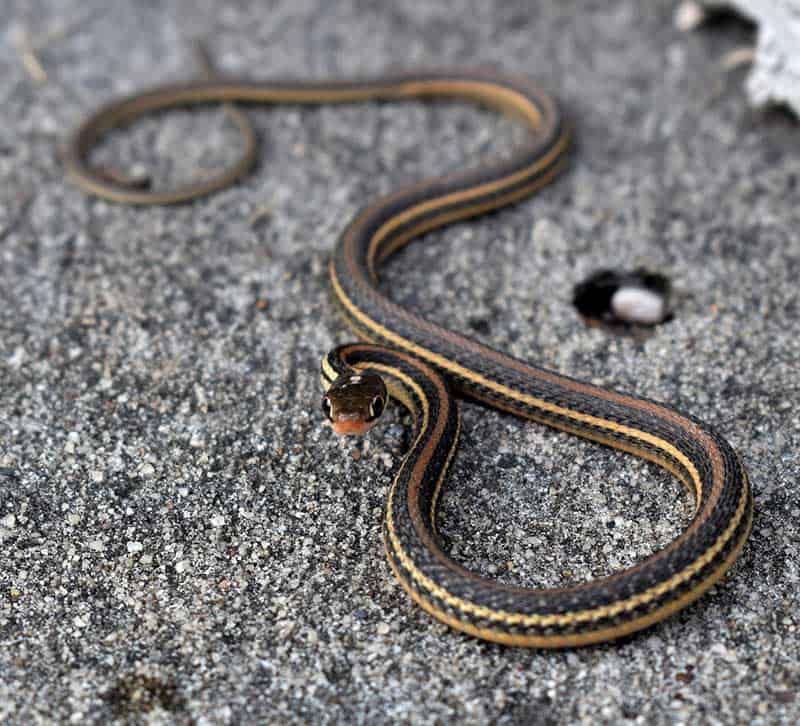 So are garter snakes dangerous? Since they are found pretty much everywhere in the United States, you might be concerned about whether they’re poisonous or venomous, and what those terms really mean.

Poisonous refers to animals and plants that release their toxins when they are consumed or touched. Think of poison ivy, poison mushrooms, or poison dart frogs.

On the other hand, venomous refers to animals that must inject their toxins by inflicting a wound — usually by biting. Dangerous snakes like rattlesnakes or copperheads are venomous, not poisonous.

It was once a common belief that garter snakes are completely non-venomous. However, it’s been discovered that they actually possess a mild neurotoxic venom in their saliva.

No need to worry, though, as this venom is only dangerous to small prey like mice, other rodents, and amphibians, and cannot seriously injure humans.

The worst that can happen regarding a bite from a garter snake is itching, burning, or swelling. Allergic reactions can sometimes happen, but they are generally rare.

There isn’t much to fear when it comes to garter snakes.

Like all wild animals, garter snakes will bite if provoked or if they’re threatened, but they aren’t aggressive and won’t attack if left alone.

If a garter snake comes into contact with a human, it will most likely either lay still and hope they aren’t seen, or they’ll slither away to escape the potential danger. So if you see a garter snake out in nature, just leave it alone and it’ll do the same to you. 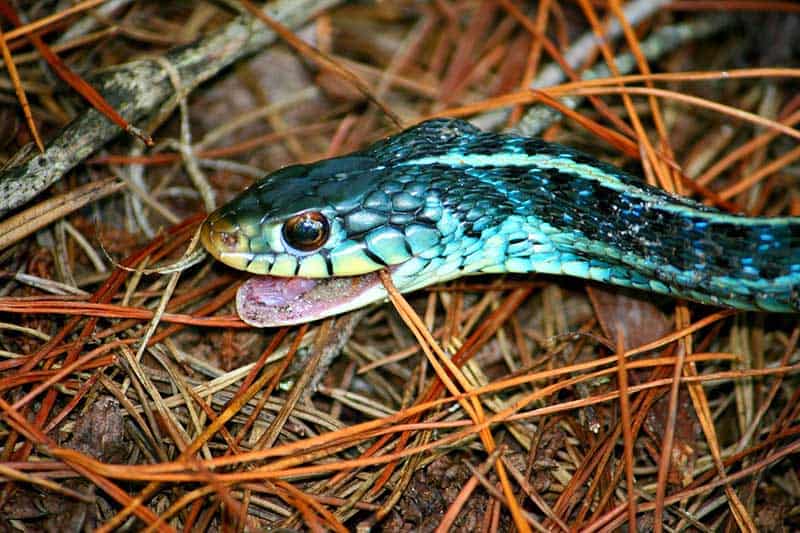 Snakes typically have a pretty bad reputation in the eyes of humans. Most people are fearful of snakes and think of them as dangerous creatures, but garter snakes are another story.

Finding a garter snake on your garden or farm is generally a good omen, as they eat pests like slugs as well as mice and rodents that could damage crops or carry ticks.

On a larger scale, garter snakes are important members of the ecosystem for similar reasons — they naturally balance out the populations of rodents, insects, and other small creatures while also providing food for larger animals such as birds of prey, large fish, and even other snakes.

Tips to Get Rid of Garter Snakes

If you really don’t like the thought of garter snakes being in your yard or garden, or if there is an overabundance of them, you can use some of these tips to reduce their presence. 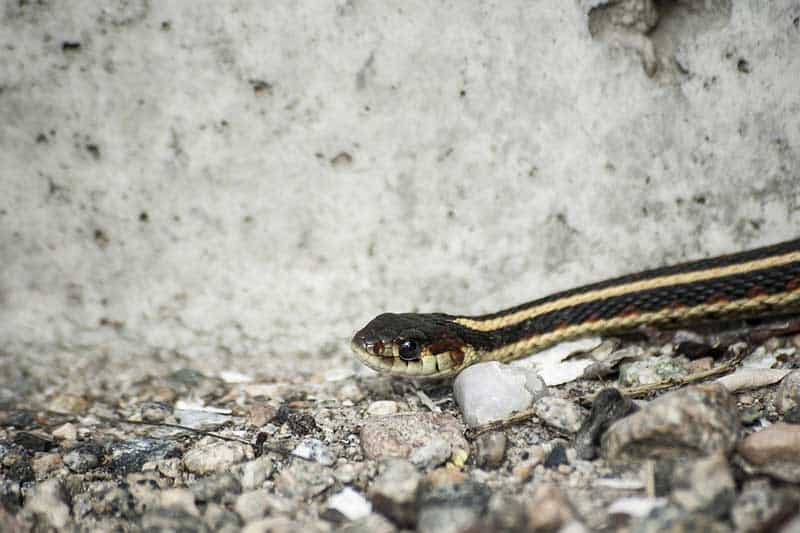 When are garter snakes active?
Garter snakes are diurnal, meaning they are generally active during the day — particularly in the early morning and late afternoon. When the weather turns cold they’re more active in the warmer afternoons.

Can you keep a garter snake as a pet?
Yes! Garter snakes are pretty docile and make great pet snakes, just be sure to adopt a captive bred snake rather than taking one from the wild.

How often do garter snakes shed?
Garter snakes grow pretty fast, and they shed as they grow. This can be once every four or five weeks for young snake. The process declines in frequency as they get older to maybe a few times a year.

How often do garter snakes eat?
In the wild garter snakes will eat whenever the opportunity arises. In captivity they are fed earthworms twice weekly, but fish and mice about once a week.

Are garter snakes aggressive?
Not at all. They will bite humans only if provoked or threatened, but in nature they only attack prey that’s smaller than them. If faced with a fight or flight scenario they will usually flee.

How do garter snakes kill their prey?
Garter snakes will bite and drag their prey in order to eat it. They possess a mild venom that affects small animals.

You may also like:  Are There Any Snakes That Play Dead? (Yes!)