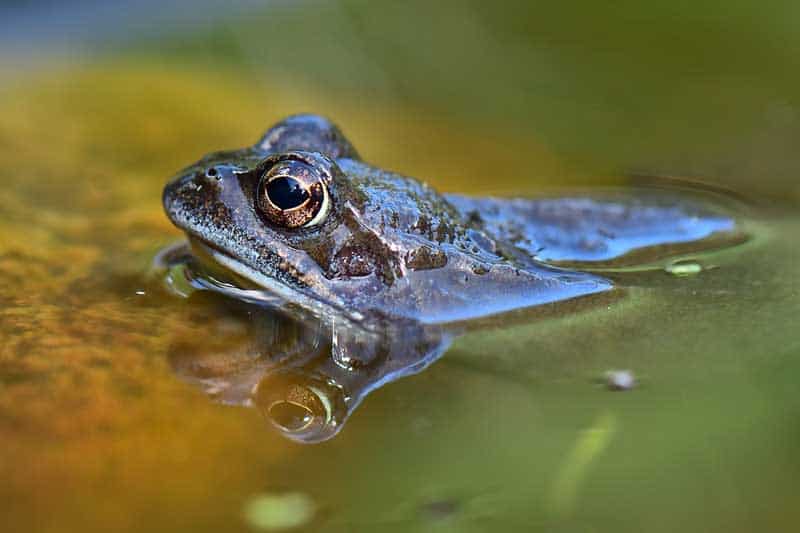 Frogs are one of the most common animals to be seen in many parts of the world. While it’s easy to find them out and about during the spring and summer, you might be wondering where do frogs go in the winter when you can’t find them in their usual spots.

Frogs are cold-blooded animals, so they need to have special adaptations to help keep them warm since they rely on environmental conditions to regulate their body temperature. This article will provide a quick glance at the lifestyle of frogs during winter.

Where do frogs go in the winter?

Frogs hibernate during the winter, which means they go into dormancy and don’t move or eat much. There are numerous locations where a frog can and will hibernate, depending on the species. Some species of these animals spend the winter hibernating underground, in ponds, and even in the burrows of other mammals.

Hibernation is the natural process by which certain animals, such as frogs, enter a state of dormancy during the colder months. Frogs hibernate by burrowing underground or into logs and staying there until spring.

During hibernation, frogs aren’t dead; they’re just in a deep sleep. Their heart rate slows down, and they stop moving around as much as they normally do. The frog’s body temperature also drops, allowing it to conserve energy while still having enough energy to survive the winter months until spring returns.

While some frog species may migrate, it‘s uncommon for them to do so during the winter. Migration occurs in the spring and summer, particularly during the rainy season, depending on the species of frog.

The most common reason for frog migration is in search of a new breeding site or better food sources. However, you won’t see these animals migrating during the winter because they hibernate.

Frogs will begin to prepare for their long hibernation when the fall season arrives. They accomplish this by storing a large amount of energy for their long winter sleep.

These creatures eat much more than usual in order to restore their fat reserves and food stores in their livers in preparation for a long, deep sleep. When they have enough fat reserves in their bodies, they’ll become less active and seek out a suitable location to hibernate.

When frogs hibernate, they don’t die. These animals go into a state where they don’t move much and appear to be dead. But that’s only because they’re trying to keep themselves safe while they sleep.

Frogs will also breathe through their skin, so you’ll also notice that when you see them in this state, there is no movement of their chest or belly.

Frogs have numerous adaptations that allow them to survive in harsh winter conditions. One of these adaptations is the production of an antifreeze chemical in their livers. This protein allows them to adapt to cold climates by preventing ice crystals from forming in the frog’s body as it freezes and keeping them alive while hibernating for long periods of time.

When a frog goes into hibernation, its body temperature drops to dangerously low levels, and its heart and lungs stop working. But since they can’t let their organs shut down, they’ll start breathing through their skin. One of the best examples of this phenomenon is found in wood frogs, which can freeze and thaw depending on their environment’s temperature.

Terrestrial frogs are frogs that live on land, and they can be found in a wide range of habitats, from deserts and grasslands to tropical forests. These frogs typically have short legs, which allows them to move quickly over dry ground and climb over rocks.

When winter arrives, terrestrial frogs can be seen burrowing deep into the soil, searching for cracks or holes in logs or rocks, hiding under leaf litters, and some even hibernate in rodent burrows. This depends on the species; for example, the American toad and spadefoots burrow beneath the ground to hibernate during the winter.

Aquatic frogs are amphibians that spend their entire lives in or near water. They have adapted to their aquatic lifestyle by developing long, strong legs and webbed feet that assist them in navigating the waters.

Aquatic frogs hibernate underwater during the winter. They accomplish this by partially burrowing into the mud or resting on top of it. During this time, these frogs will occasionally swim slowly around in their ponds or lakes, but for the most part, they’ll remain completely still and hidden from predators.

Frogs play an important role in the ecosystem. They help control insects and provide food for other animals, but winter can be difficult for them. Therefore, these animals hibernate to survive the winter.

This can be a challenging process for them, but it’s necessary for their survival. Frogs are cold-blooded creatures that can’t regulate their internal temperature in the same way that warm-blooded mammals can. They’re dependent on their surroundings to keep them warm enough to survive.