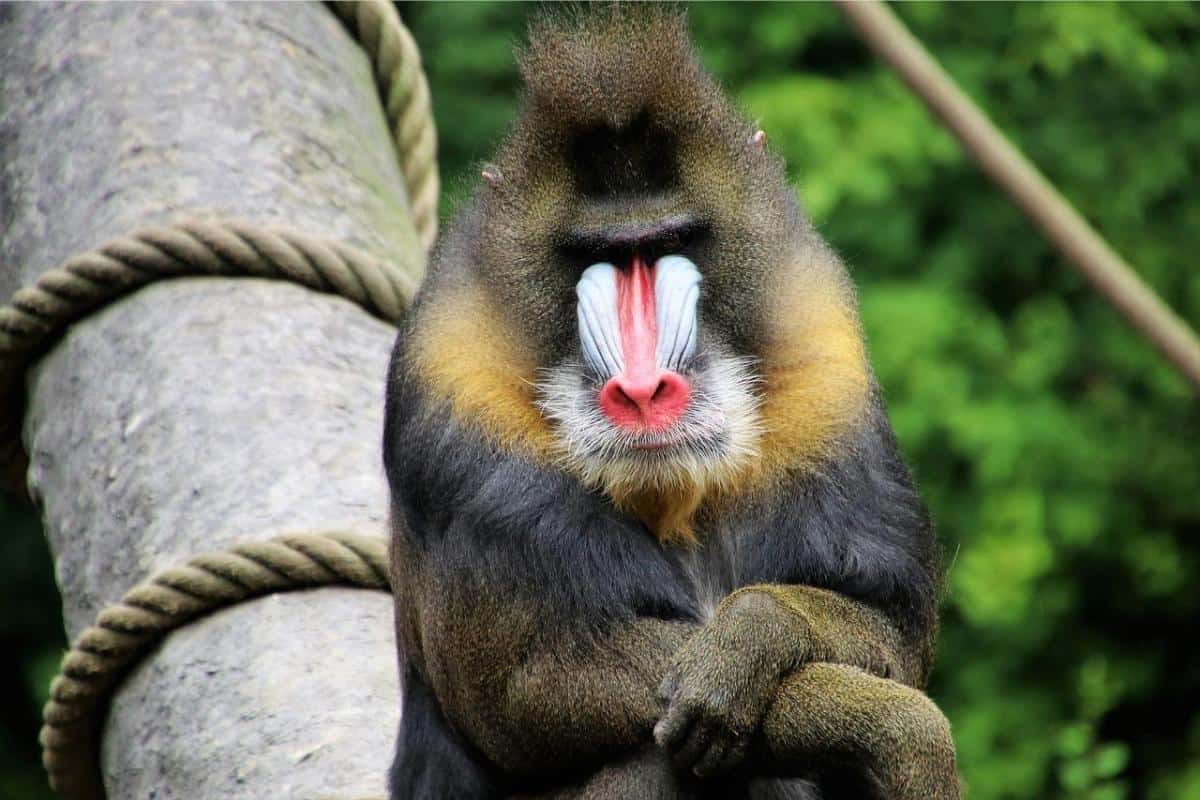 Baboons are small compared to apes, but they’re the largest monkeys in the world. When standing on all fours, baboons are typically between 20 and 34 inches. A baboon’s tail can add another 16 to 23 inches!

There are five different species of baboon, which can all be found in Arabia or Africa. How strong are baboons, and what type of baboon is the strongest? Keep reading to find out more about these primates.

How Strong Are Baboons?

Baboons aren’t as strong as great apes, but they’re very strong when compared to other monkeys. Male baboons weigh between 41 and 99 pounds, but they can lift between 100 and 200 pounds. Baboons are also fast and agile, which allows these primates to use their speed more effectively.

A baboon can travel at speeds up to 30 mph, which allows them to strike targets with a surprising amount of force. Depending on the species, the average strike force of a baboon can be anywhere between 975 and 1,560 lb.-ft./s The olive baboon, which can weigh up to 82 pounds, is the strongest baboon species.

Male baboons are known for being aggressive and will readily attack other animals, including predators like leopards. In addition to attacking other animals, baboons will attack each other. The male baboon will fight over food, territory, and mates, and will even fight without an apparent reason.

Baboons are omnivores that primarily feed on roots, nuts, fruits, and vegetables. While baboons will eat small animals, baboons usually don’t have to hunt for prey. When baboons do fight other animals, it’s usually because they’re threatened or fighting over territory.

How Strong Is a Baboon’s Bite?

Baboons have strong jaws that allow them to bite with an incredible amount of force. The bite force of a baboon is usually between 500 and 550 PSI, which is comparable with a chimpanzee. However, it’s a far cry from the bite force of a gorilla, which is around 1,300 PSI.

Thankfully, baboons have a secret weapon: long, sharp canine teeth.  A male baboon’s canine teeth can grow to be as long as 6 inches. When a baboon wants to display its dominance, it will usually bare its teeth. Thanks to its sharp teeth, a bite from a baboon can do some serious damage.

Why do baboons have such sharp teeth? Baboons are opportunistic eaters, and many of the foods they enjoy, like roots and nuts, are tough and hard to chew. Over time, baboons have developed teeth that can bite through all kinds of foods, as well as the flesh of other animals.

Is a Baboon Stronger Than a Chimpanzee?

On average, chimpanzees are bigger than baboons, standing between 2.1 and 3.1 ft tall on all fours and weighing between 88 and 130 pounds. Even though chimpanzees have a slight size advantage over baboons, the baboon is faster than the chimpanzee. In spite of this, chimps can still hit with more force than baboons can.

You may also like:  Where Do Elephants Live in Africa?

While you could argue that baboons and chimpanzees are equally matched, chimpanzees are also known to gang up against other animals. A single baboon might be able to hold its own against one chimpanzee in a fight, but it wouldn’t last long against a group.

Are Humans Stronger Than Baboons?

Humans are taller and heavier than baboons, which gives them a clear size advantage. While increased size is usually linked to increased strength, baboons still have an edge over humans in some categories. Even though humans have stronger punches than baboons, a speedy baboon can hit with more force, ultimately causing more damage.

The baboon also has a major lead when it comes to bite force. Humans have an average bite force of 162 PSI, but baboons have a bite force of 500 to 550 PSI. This is only amplified by a baboon’s long and sharp canine teeth, which can easily puncture human skin.

The natural behavior of a baboon also helps it to develop strong muscles. Baboons climb and swing through trees, which helps to strengthen their arms. While a bodybuilder would have a clear strength advantage over a baboon, the average person might struggle in a one-on-one fight. A baboon might be able to beat a human in a fight, but humans are still the stronger species.

The baboon is the largest monkey in the world, capable of lifting between 100 and 200 pounds. While the baboon is fairly strong for its size, one of the biggest advantages this primate has is its powerful bite. Male baboons have long and sharp canine teeth and can bite with a force between 500 and 550 PSI.

Baboons are extremely aggressive and will even attack other baboons. Although the jaws, speed, and agility of a baboon make the primate a threat, baboons aren’t stronger than humans or chimpanzees. Baboons are strong for a primate of their size, but baboons share a habitat with animals that are much stronger.