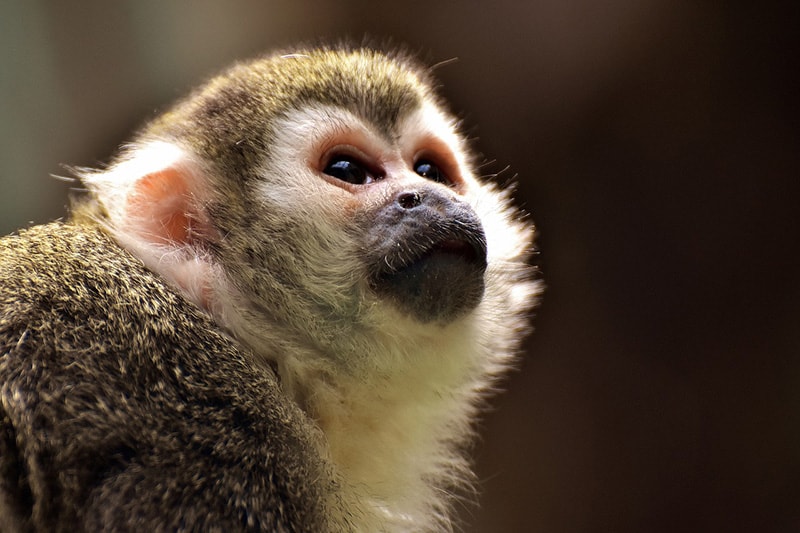 Monkeys are exotic and unlike any other type of animal on the planet. These unique mammals that share many human characteristics are found in the forests of Africa, Central America, South America and Asia. Monkey’s can come in a wide range of sizes, from tiny to large. Small monkeys have long been coveted exotic pets in many countries. They are very cute, and their small size means less space requirements than a large monkey. In this article we will look at the small monkey breeds that have historically been favored as pets.

In the below list of tiny monkeys, we’ll check out some pictures and learn some fun facts about these petite primates. 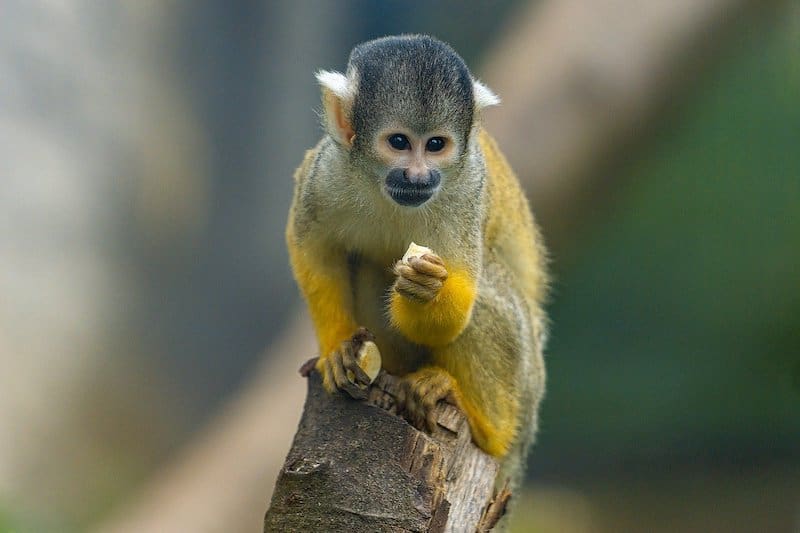 Squirrel monkeys are a small monkey breed with grey fur along most of its body and yellow along its arms and tail. These monkeys live in the canopy layer of the forest in Central and South America in groups of up to 500! Unlike some other monkey’s, they cannot use their tail to grasp onto branches.

Their tails are only to help them balance. Squirrel monkeys are considered to be very smart and have a large brain compared to the size of their body.

As pets they are highly active and require an abundance of attention, stimulation and entertainment and are prone to destructive behavior if they do not get enough. They are also highly social monkeys and it is not advised to make them solo pets for this reason. 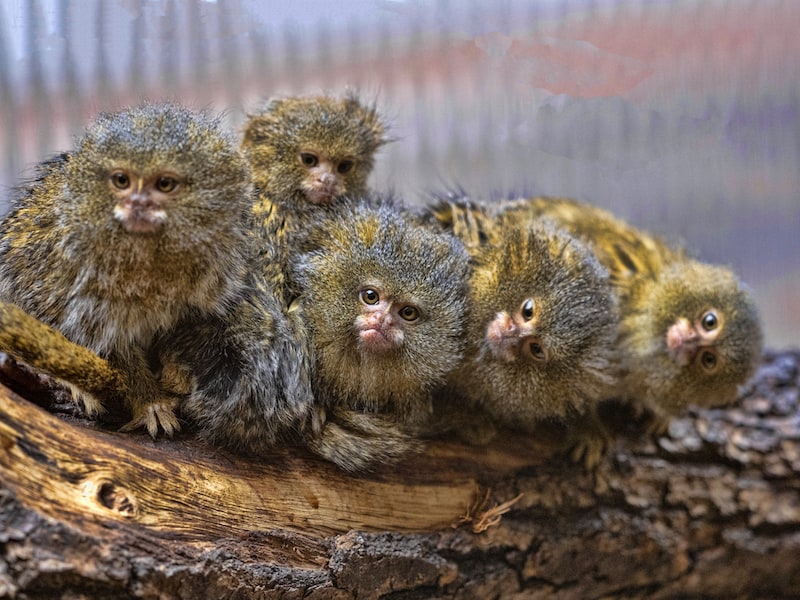 From the rainforests of the western Amazon basin in South America, pygmy marmosets are the smallest monkey in the world. They only grow to be a few inches long and weigh mere ounces. Their tails are longer than their bodies, helping them to keep excellent balance while running through the treetops.

Being so tiny they are prey to many larger predators such as cats, eagles, snakes and hawks. But they are very fast, and can even turn their head around almost entirely backwards to keep an eye out on all sides.

Known as “finger monkeys”, pygmy marmosets have often been kept as companions. However, they need constant attention and a large space to roam and play. Pygmy marmosets require companionship at all times, so they’d need several cage-mates of the same species. They can be very territorial and may become aggressive in captivity. 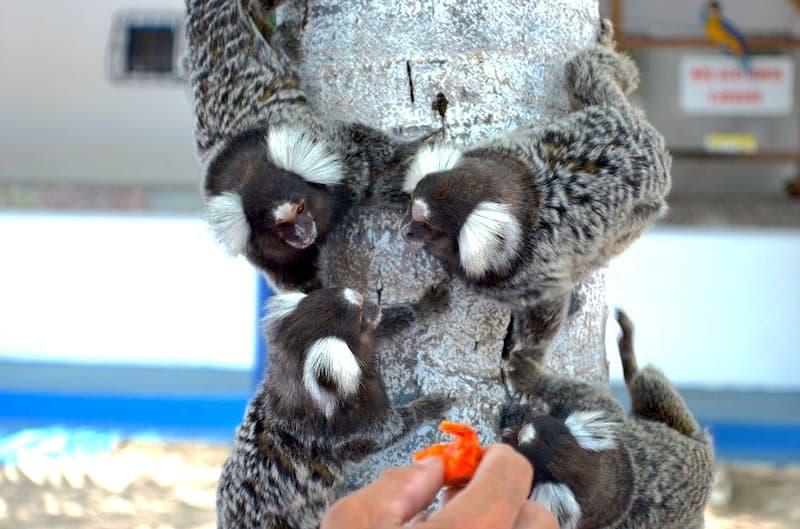 Common Marmosets are native to Brazil. In the wild their diet consists of insects and the liquids produced by plants, such as sap, resin, gum and latex, which they use very sharp incisor teeth to retrieve. They live in social groups of 3 – 15 monkeys that usually consist of 2 or 3 family generations (siblings and offspring).

Caring for common marmosets can be difficult because they are so high maintenance. They require a strict diet rich in particular nutrients, and they also need access to UV rays each day to maintain their health, They are affectionate and playful when young but, like all monkeys, can grow to be aggressive or unpredictable. 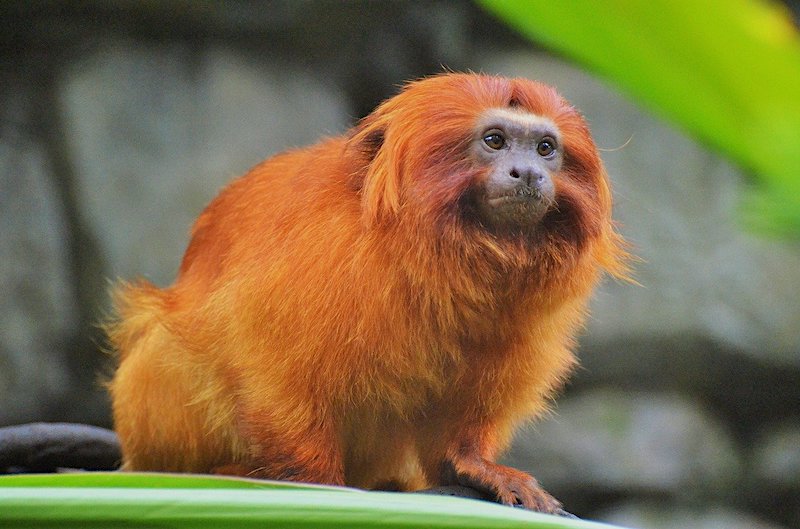 The golden lion tamarin is a small monkey native to Brazil. It is one of the most popular breeds of tamarins, and is known for its bright orange coat that’s thicker around the neck like a lion’s mane. They live in family groups of 2-9 monkeys and will share their food with group members at meal time. At night they like to sleep in tree cavities. Sadly they are an endangered species with only about 1500 left in the wild.

Even though they are small they still need a large enclosure with lots of platforms and room to play. Enclosure bars need to be very close together to prevent them from reaching through and unlocking the door.

These intelligent monkeys must fed a constantly rotating diet to prevent boredom. Like most monkeys they do better living in a group, and can become hostile if left under-stimulated. 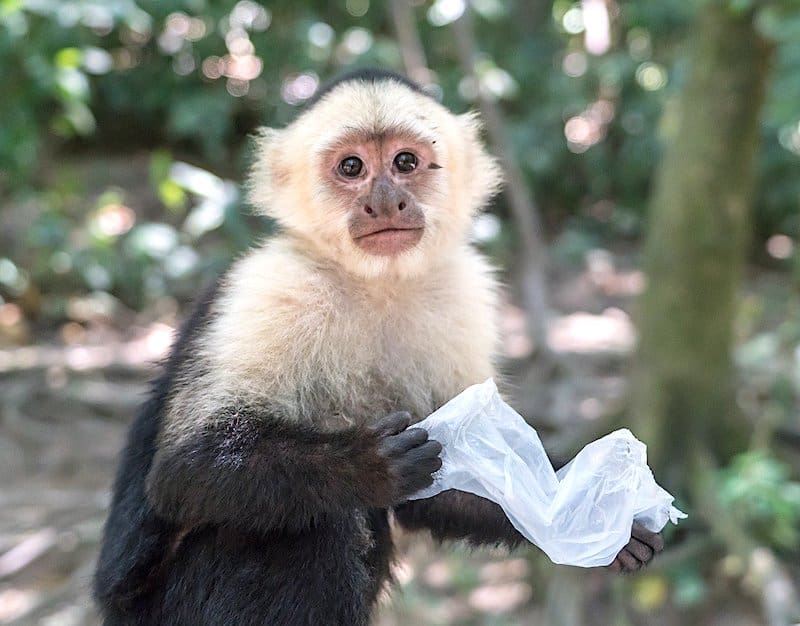 Capuchin monkeys are native to Central and South America. They are perhaps one of the most intelligent of the “new world” monkeys and have learned to use sticks and stones as tools. Capuchins have opposable thumbs, unlike many of the other small monkeys on this list.

They also have a prehensile tail which they can use for grasping tree branches. Most of their day is spent looking for food, and they eat a wider variety than most monkeys. Their cleverness and varied diet helps them adapt to new environments more easily than other monkey’s, however they are not immune to the threats of habitat loss and deforestation.

Capuchin monkeys are one of the most common to keep as pets. They live for an average of 40 years and are highly intelligent. This is the breed of monkey you’ll most often see on television or in movies such as Ace Ventura or Friends.

While it’s true that they’re intelligent, capuchin monkeys are not capable of being potty trained. As a result, they’ll often need diapers for the entirety of their life if kept as a pet. Also, while their mischievousness can lead to light-hearted fun, they’re also known for being territorial and aggressive as adults. They require a lot of space for exercise and the company of other capuchins. 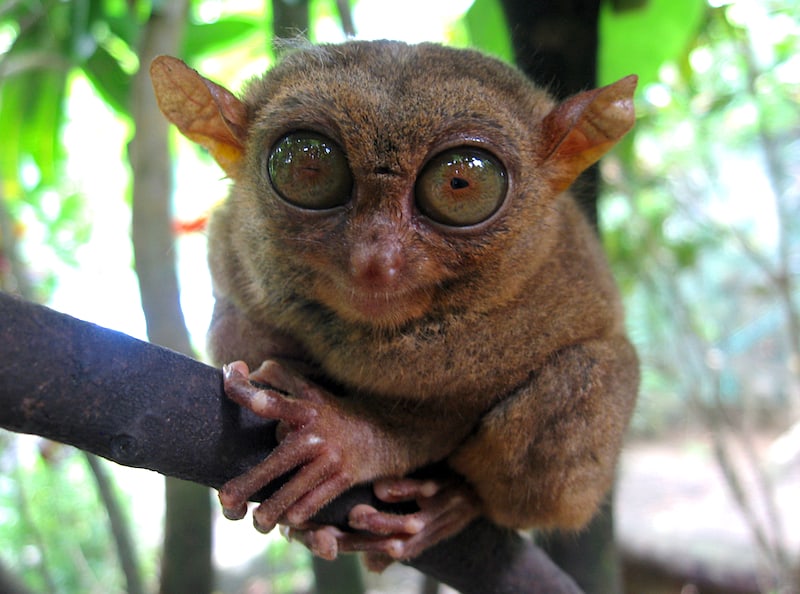 Tarsier monkeys are found in the wild in Southeast Asia on island such as the Philippines, Malaysia and Indonesia. They have the largest eyes, relative to body size, of any mammal. Tarsiers are mostly nocturnal and their huge peepers evolved to help them see at night.

Their large eyes cannot rotate, so they must move their head around to look in a different direction, like an owl. And like an owl, they can rotate their neck 180 degrees in either direction. They have unusually large fingers and feet that help them climb and cling to vertical branches.

Tarsiers are also tremendous jumpers, with the ability to leap 40 times their body length. This helps them ambush prey such as insects, bats, lizards and frogs. Unlike other monkeys, Tarsiers do not eat plants.

You may also like:  How to Keep Coyotes Out of Your Yard

It has been found that Tarsiers do not do well in captivity, often developing mental issues that can result in suicide. They become incredibly stressed by cages that are too small, certain lights, sounds, or even proximity to humans or human touch. They become so upset they will bash their heads on any hard surface of their enclosure.

This and their very specific habitat and prey needs make it almost impossible for even professionals to have successful captive breeding programs. Their future survival will be dependent on maintaining their habitat in the wild. 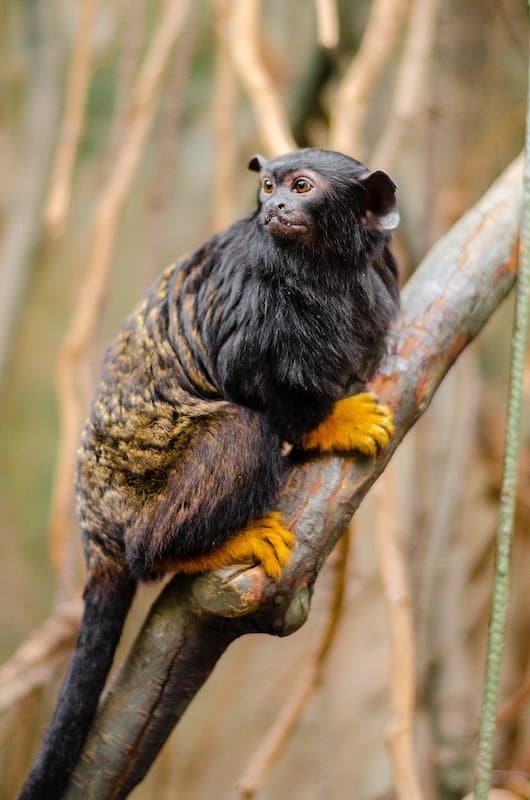 Also called the golden-handed tamarin, this monkey has distinct reddish – golden colored hands and feet. They also sport long ears that protrude from their head.  The red-handed tamarin originates from South America specifically in the northern forests of the Amazon River.

They are excellent climbers, partly due to having sharp claws on their fingers and toes instead of nails like some monkeys. Sporting super shock-absorbing joints, they can leap 60 feet from a tree to the ground without injury.

Like other Tamarins, the red-handed Tamarin is tends to be a more energetic pet and needs a spacious enclosure. They can be very intelligent and friendly when they are raised properly, but require lots of attention and stimulation to prevent boredom. Bored Tamarins can display many behavioral issues. 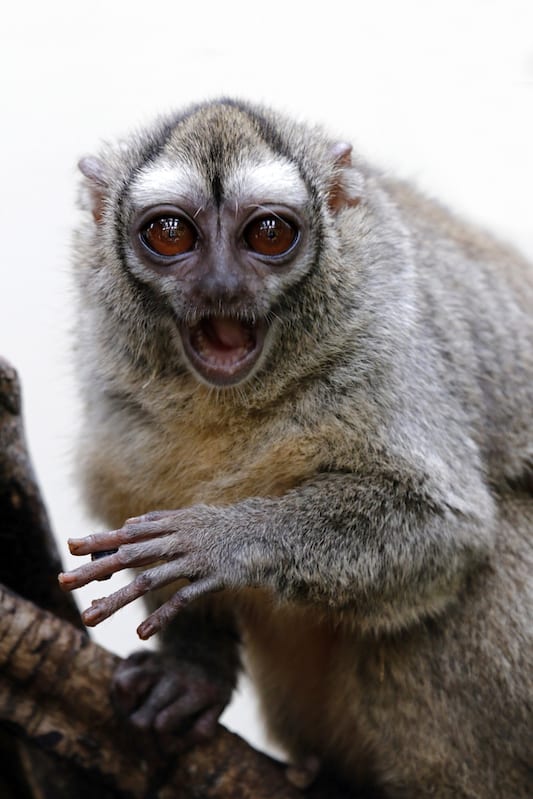 Night monkeys, of which there are 11 species, are the only truly nocturnal monkey. Due to their nocturnal nature, and large eyes, they are also called owl monkeys. Night monkeys are found across Panama and most of South America.

They don’t have color vision, but this actually improves their vision at night and they can detect visual cues in the dark better than other monkeys. Night monkeys mainly eat fruit, which can be easy to sniff out in the dark, but also supplement with insects.

Many of the monkeys that fall in the category of night money are endangered or fall under the risk of becoming so. This is due to high rates of smuggling and trading, loss of habitats in their native countries, and their use in biomedical testing.

These monkeys can be harder to own and raise compared to others due to their nocturnal nature. This combined with their tendency for violence does not make them a very good pet.

Is it legal to own a monkey as a pet?

There is not a simple answer to that question. In the United States, the rules for exotic pet ownership are made on a local level, and vary from state to state. Monkey’s may be prohibited in one state but allowed in another. Sometimes only certain species are allowed, or in certain numbers. Most states that do allow you to own exotic pets still require you to obtain some type of permit or license.

To make matters more complicated, a county, township or city may have their own restrictions that may be more strict than the overall rules for the state.

It is important to keep up with these laws and check back in with the current status of all the regulations frequently. Public safety concerns, endangered species laws and animals welfare laws continue to increase and your local laws may change often. Use your state and local county/town websites to find the exotic pet laws that apply to you.