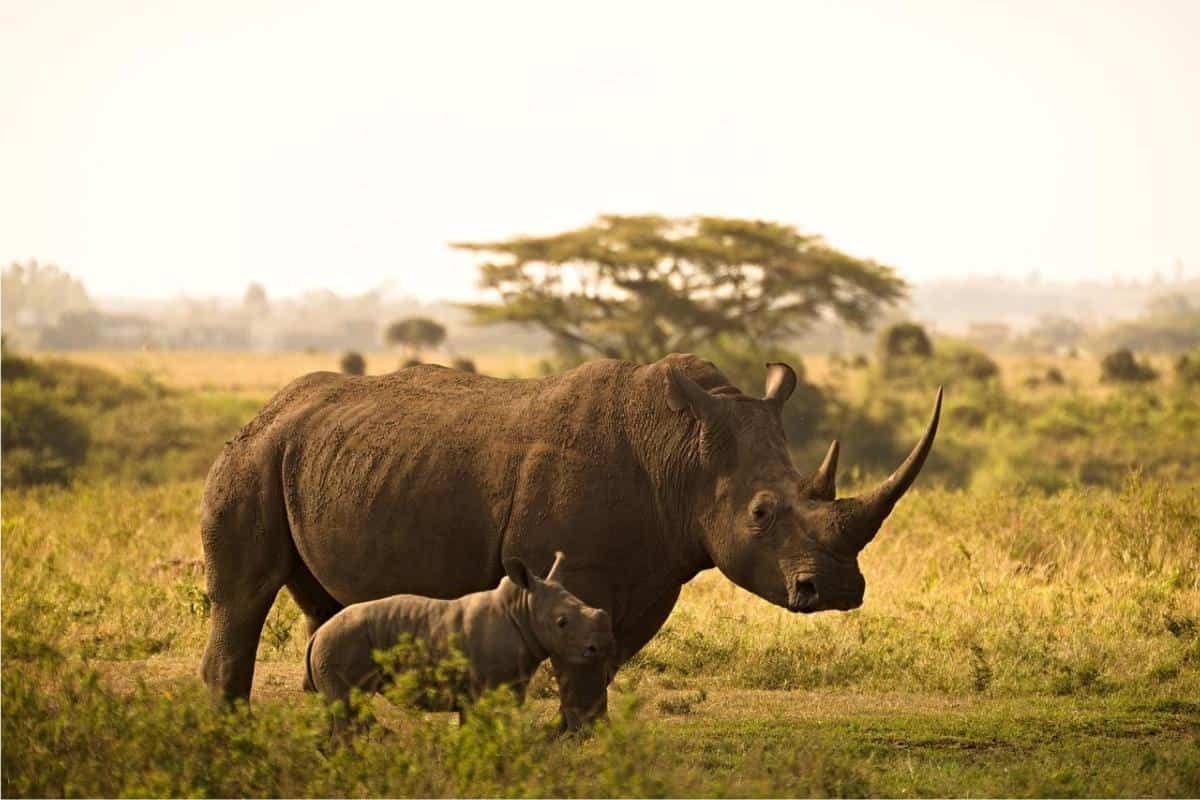 The rhinoceros is a large animal that’s known for its gray skin and horn. Some types of rhinos have two horns, while others have a single horn. Depending on the species, a rhino can weigh more than 3 tons!

Rhinos are herbivores, which means that they only eat leaves, grass, and other types of vegetation. Even though a rhino doesn’t have to hunt prey, it’s still a strong and powerful animal.

How Strong Are Rhinos?

Rhinos have an average height of 5.2 feet and can weigh more than 7,000 pounds. While the sheer size of a rhino gives it incredible strength, rhinos can also run at speeds up to 34 miles an hour. The combination of size and speed allows rhinos to strike opponents with over 8,000 pounds of force.

Since rhinos are so large, they can also carry large amounts of weight. A rhinoceros can carry 900 pounds or more on its back without impacting its musculoskeletal function. While this might sound impossible, it’s important to remember that 900 pounds is only 15% of the average rhino’s body mass.

A rhino also has strong jaws, with a bite force of up to 1,000 PSI. Some species of rhino have sharp, strong incisor teeth that can be more than 5 inches long. When fighting predators or other rhinos, a rhino can use its powerful bite to inflict lethal damage. In fact, a rhino is more likely to use its teeth than its horns in a fight.

Even though rhinos are extremely strong, a rhino’s horn is soft and fairly weak. A rhino’s horn is made of keratin, which is the same materials are nails are made of. Rhinos use their soft horns to dig for water and forage for food.

What Is the Strongest Type of Rhino?

The strongest species of rhino is the white rhino, which weighs between 3,750 and 7,940 pounds. While the white rhino has an average hitting force of 6,358 pounds, it can strike with much more force when traveling at full speed. White rhinos also have a bite force of 1,000, which is stronger than any other rhino species.

Even though a white rhino is larger and stronger than other rhino species, it doesn’t have the sharpest teeth. That honor goes to the Indian rhino, which has long incisors and canine teeth. In contrast, the white rhino doesn’t have any teeth in the front of its mouth.

No matter what the species, male rhinos are larger and stronger than females. Male rhinos are also more likely to engage in aggressive behavior. It’s common for male rhinos to fight each other for dominance or to fight over mates.

Are Rhinos Stronger Than Hippos?

Like rhinos, hippos have large, heavy bodies. Male hippos weigh between 3,300 pounds and measure anywhere from 11 to 17 feet long. Hippos and rhinos can both have long, sharp teeth, but hippos have tusk-like teeth that are made from ivory.

Rhinos are faster than hippos, but a rhino’s speed advantage isn’t as big as you might think. A rhino can reach speeds of 34 MPH, while a hippo can move at 30 MPH. This means that both hippos and rhinos are able to strike opponents with an incredible amount of force.

With a bite force of 1,800 PSI, the hippo has one of the most powerful bites in the world. However, rhinos have some natural protection from bites thanks to their armor-like skin. The skin on a rhino’s back and flanks is extremely tough, which means a hippo would have to bite its neck or stomach to do real damage.

Depending on the species, however, it’s likely that a rhino could strike with more force than a hippo could. Even though hippos are heavy, a large rhino could knock a hippopotamus to the ground with its strong neck muscles. It’s rare for hippos and rhinos to attack each other in the wild, but if these two animals were to face off against each other, it’s likely that neither animal would fare very well.

Rhinos aren’t completely bulletproof, but a rhino’s skin can be strong enough to stop a bullet in some cases. Not only can rhino skin be up to two inches thick, but it’s shockingly strong, especially when compared to the skin of other mammals. A rhino’s skin is made up of fibers and collagen that are woven together.

This tough, thick skin makes rhinos resistant to bullets, especially if the animal is shot from a distance. However, rhinos tend to have thinner skin around the neck and the stomach, which means that hunters usually target these areas. A rhino’s skin functions like armor, but that armor isn’t perfect.

In fact, even though rhinos have amazing natural protection, the animals are often targeted by poachers. Even though rhinos can regrow their horns, poachers frequently kill animals when harvesting horns. Since rhinos don’t need their horns to survive, some conservationists recommend dehorning rhinos for their own protection.

Rhinos are massive animals that are also quite fast, reaching speeds of up to 34 MPH. When charging, a rhino can use its speed and weight to strike with up to 8,000 pounds of force! The rhinoceros also has a powerful bite and can wound opponents with its sharp teeth.

Not only are rhinos strong, but they’re also protected by thick, tough skin. Rhino skin is so strong that it’s capable of resisting bullets. While rhinos are powerful and tough, they’re still targeted by predators, and some species are critically endangered. Even an animal as mighty as the rhino needs protection!