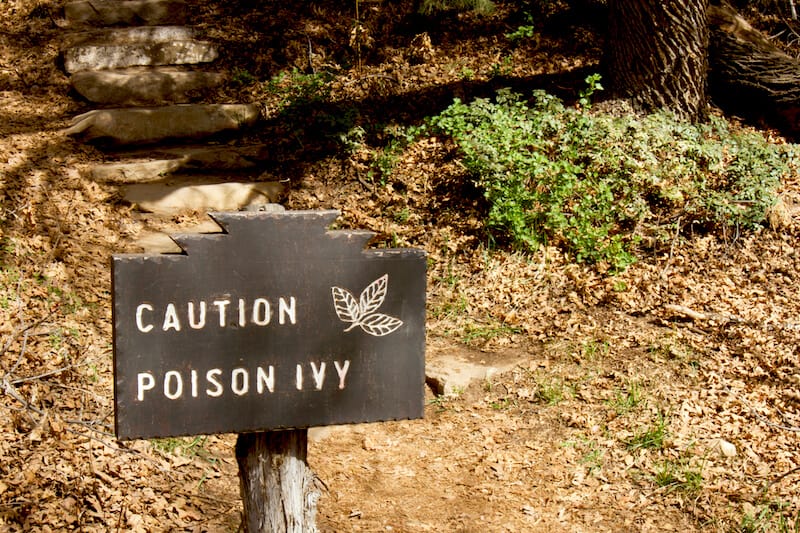 No one wants to touch poison ivy. It causes a painful, itchy rash that can take weeks to fully heal. Perhaps the best known way to identify poison ivy is by its leaves, which grow in groups of three leaflets. The leaves are usually slightly pointed with a toothed edge and a red stem. Unfortunately many other plants and vines can appear quite similar leaving people confused what is safe to touch. In this article we will talk about a few of poison ivy’s most identifying features, and then look at 11 plants that look like poison ivy.

How To Identify Poison Ivy

Here are some of the characteristics of poison ivy to look for:

This is a fast growing maple tree native to North America. Young trees can look like vines or weeds, and their leaves bear a superficial resemblance to poison ivy. The easiest way to tell them apart is that box elder stems are not red, and the leaf stems grow directly opposite each other of the main stem, rather than alternating like poison ivy stems.

A flowering plant related to grapes, Boston ivy is actually native to Asia, despite the name. It is commonly used as an ornamental vine that climbs buildings. It can have a similar leaf shape to poison ivy, and even has a red stem. However, Boston ivy leaves are uniformly serrated, are on shorter stems and the middle leaf does not have have a longer steam like poison ivy.

This plant is very common in much of the eastern and southern U.S. It grows rapidly and can easily crowd out other plants. While it does look a lot like poison ivy, there is one clear difference. Virginia creeper has five leaflets in each grouping, while poison ivy has three.

A close relative of the blackberry, dewberries grow wild throughout much of North America and Europe, and their fruit can be eaten raw or in jams, pies, and cobblers. Before they flower and fruit, they resemble poison ivy. However, their leaves have a sharper, more distinct point at the end, and the edge has uniformly fine teeth.

A legume native to North America, the alternating leaves with three leaflets can give this plant a resemblance to poison ivy. To make it more confusing, it often grows near poison ivy! However, this vine doesn’t climb trees. Also the base of the leaf is fatter and more rounded, and the steam is thinner.

You may also like:  Are Palm Trees Native to California?

This wild strawberry is one of two species of wild strawberry that were hybridized to create the strawberries you can now buy in the grocery store. Like poison ivy, it’s characterized by leaves with three leaflets each. So before the obvious strawberry fruit shows up, it can resemble the itchy ivy. Strawberry leaves are rounded at the end rather than pointed like poison ivy. Other differences from poison ivy include their uniform teeth along the edge, the stems are fuzzy, and the plant does not creep.

This woody plant grows leaves with three leaflets, so it bears a resemblance to poison ivy. However, the leaves have small lobes along the edges rather than teeth, and it grows as a woody shrub rather than a vine. Additionally the middle leaf is not on a distinctly longer stem.

This wild raspberry is native to most of North America, and can be found growing thickly in many places. It has similar leaves with three leaflets each, and can often be found growing right next to poison ivy. The serrated edges are far more pronounced than on poison ivy though, and the leaves have a rougher texture.

Also called the Indian turnip, the root of this plant is edible and was once a common food source for native peoples. When it’s young, the leaves look very much like poison ivy, although mature plants look completely different. However, its leaves are always smooth and the plant grows straight up, rather than creeping along the ground. Leaves are wider at the base than most poison ivy, and the base of the leaves are so close together they often touch.

Common jewelweed (also called spotted jewelweed) is an annual plant with bright orange flowers that can reach 5 feet tall. While it’s often mistaken for poison ivy, this plant can actually treat the rash that poison ivy causes. While the veins and texture of the leaves are similar, jewelweed leaves don’t grow three leaflets like poison ivy does.

An invasive plant native to Australia, this species has been introduced to North America where it causes extensive damage to native species. It has a passing resemblance to poison ivy, but it’s leaflets come in fives, not threes.