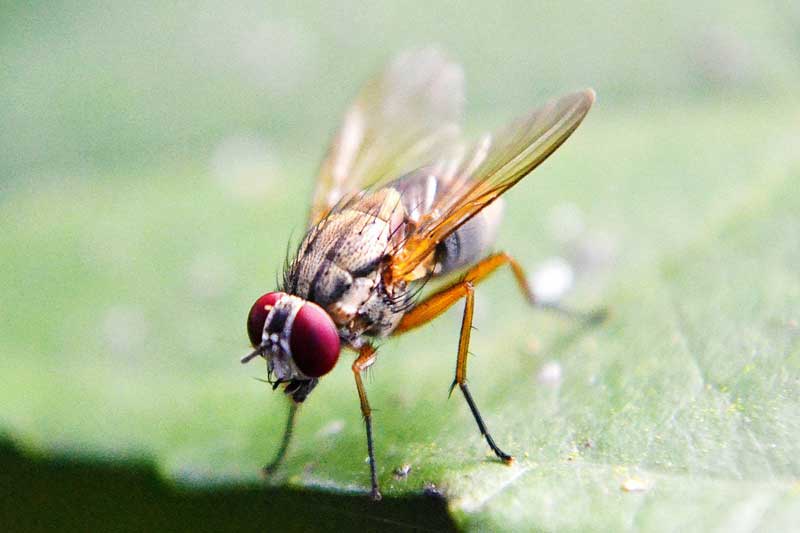 Gnats are probably one of the most annoying insects. They’re always buzzing around and you can never hit them. I’m often searching Google and Pinterest for new ways to get rid of gnats, because even when you get rid of them there’s always a chance they can come back. I went back through my own search history and also found some other common questions people are asking about gnats to get you this list of 23 commonly asked questions and facts about gnats, drain flies, and fruit flies.

23 Common questions and facts about gnats

Moisture, mostly. Gnats need moisture to lay their eggs, so if you have gnats you have a moisture buildup somewhere. Fruit flies are the exception, since they’re drawn to overripe and rotting fruit.

Gnats don’t carry disease, and they don’t bite. To humans, they’re totally harmless. To plants, they’re quite the menace. Gnat larvae feed on plant roots, and that includes your house plants. So, a gnat infestation doesn’t pose any threat to you, but your house plants may suffer.

3. Can gnats lay eggs in your hair?

No. Gnats lay their eggs in moist food sources. Depending on the type of gnat, that means moist soil, the inside of a drain, or a piece of fruit. Your hair and scalp are definitely not appealing breeding sites for gnats.

4. Why are gnats so annoying?

Gnats are drawn to moisture, and your nose, mouth, and eyes just happen to be moist places. So, gnats tend to fly in there. It’s not dangerous and they’ll fly away as soon as they realize where they are, but it’s definitely annoying to have tiny insects flying around your face.

Adult gnats live for 7 to ten days, laying up to 300 eggs which will hatch in 4 to 6 days and the larvae will mature into adults in another 12 to 14 days. So, yes, gnats reproduce very quickly.

Bleach kills pretty much anything. It won’t kill the adult gnats that are flying around your house, but it can kill larval gnats in your drains. Don’t use it to try and kill fungal gnat larvae in your potting soil, because it might kill your plants, too.

7. Why do I have gnats in my bathroom?

The moisture in the drains of the sink and shower provides a great place for gnats to lay their eggs, so they’re drawn there as adults and then they hatch from the eggs, live for a bit as larvae, and fly out as adults. It’s harmless, but a bit gross and definitely annoying.

They don’t go away, but they are less active at night. Gnats are mainly active during the day. So, at night they’re still there, but you won’t notice them.

9. Do gnats turn into maggots?

No. “Maggot” is a term for insect larvae, usually fly larvae. Gnats are types of flies, so their larvae are technically maggots, but it’s the maggot that turns into the gnat, not the other way around. More importantly, these maggots are tiny and harmless. You’ll likely never see them.

You may also like:  10 Hornets, Bees, and Wasps in Texas (Pictures)

Adult gnats live for about a week. They spend about two weeks as larvae before they become adults. It’s a very short lifecycle, which is why they breed so quickly.

11. Where are gnats coming from?

Moist soil, trash cans, and drains. Gnats lay their eggs in moist organic matter so the larvae have an easy food source available when they hatch, and in your home these are the best places for them to lay their eggs.

12. At what temperature do gnats die?

Most gnats thrive between 75 and 80 degrees Fahrenheit. They aren’t fans of the cold or the heat, which is actually one reason they’re so common in homes- your house has a much more comfortable temperature range than the outside world.

Gnats don’t bite people, so their bites don’t look like anything. Other small flying insects, like midges, do bite. You won’t find these inside your home, though.

Nope. A gnat is a gnat, a fly is a fly. They’re separate animals. Well, technically, gnats are just really small flies. But a gnat will never turn in to a house fly.

16. What are gnats attracted to?

In general, gnats like moist organic matter. That can be fruit, soil, or the gunk in your drains, depending on the type of gnat. These places are all full of food for their larva, so they’re great places for gnats to lay eggs.

17. What’s the fastest way to get rid of gnats?

A bowl of apple cider vinegar mixed with water and a bit of dish soap is always the first line of defense with gnats. The vinegar draws them in and the dish soap cuts the surface tension so they sink when they land on the surface. But there are also some products on the market for getting rid of gnats. Here’s one that people have been having a lot of success with, and it’s pretty high tech.

If you’re having problems with gnats in your house, and don’t want to mess around, then the Zap T360 Pro is what you want. Great customer reviews specifically for killing gnats. Buy on Amazon.

Vanilla extract can repel gnats, although it won’t remove them from your home. It makes a great, all natural bug repellent for you to wear, though.

19. How do you find out where gnats are coming from?

Adult gnats live for about seven days. They can lay a lot of eggs during that time, and those eggs hatch quickly into larvae that mature into more adults in about two weeks.

21. Do dryer sheets keep gnats away?

Not really, although Bounce dryer sheets will repel fungus gnats. No other brand seems to work, and fruit flies and drain fly aren’t even repelled by Bounce. Dyer sheets can keep other insects away, though.

Outside, yes. Inside, maybe. Gnats don’t handle cold or heat well, and are happiest when the temperature is between 75 and 80 degrees. They can survive the winter if they find someplace warm and wet, like the inside of your home.

No, but it will kill fungus, which is what their larvae feed on, so it can effectively remove fungus gnats.