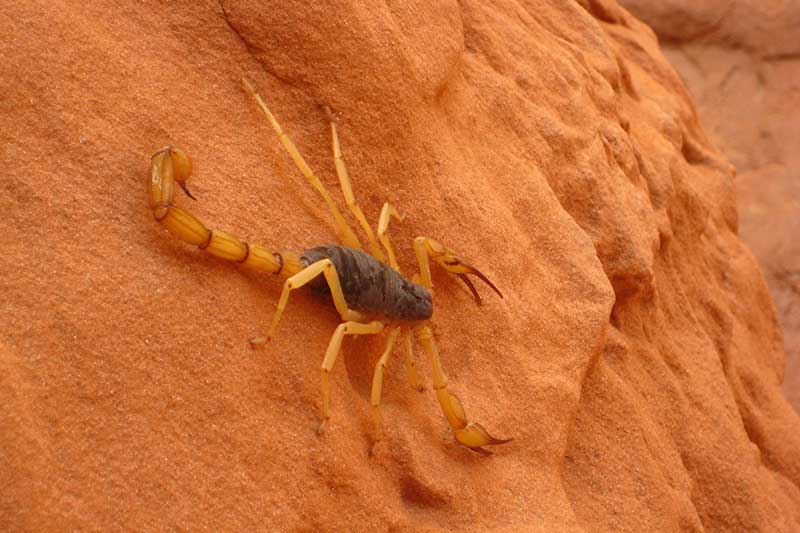 Scorpions are arachnids, which are close relatives of spiders, and can be easily recognized by their curling stinger and large pincers in most cases. They prefer dryland habitats, but there are many species of scorpions in Texas that you can encounter. Before you worry about being stung by these fascinating animals, there are no lethal scorpions in Texas and they will only sting when disturbed. Scorpions are most easily found at night using a blacklight, as they’re the only arachnids that fluoresce under ultraviolet light.

7 Species of Scorpions in Texas

There are at least 20 known species of scorpions in Texas. In this article we’ll take a look at seven of those and talk a bit about each one. Scorpions are classified as arachnids and have exoskeletons to protect them along with their dangerous stingers.

The Striped Bark Scorpion is the only species that occurs throughout all of Texas, and is the most common species in Central Texas. They’re capable of stinging, but the sting itself only causes moderate reactions in most people. It’s usually sufficient to apply ice packs on the area where the sting occurred, but it’s important to make sure an allergic reaction doesn’t manifest.

Striped Bark Scorpions are nocturnal, preferring to remain sheltered during the daytime in order to regulate temperature and water balance. Their bodies are covered with a waxy cuticle to also help reduce water loss, and for reasons as yet unknown, this cuticle lights up blue under a blacklight. They’re the most commonly seen scorpion in Texas, and the most likely to encounter within your own home.

The Texas Cave Scorpion, as the name implies, is found in and around caves. This is a venomous scorpion, but it’s said that it’s more similar to a bee sting and not of much concern. They can be found occassionally in homes next to natural areas, as they seek out cave-like environments, but they’re more likely to nestle under wood piles.

The Texas Cave Scorpion is a patient and opportunistic predator, feeding primarily on cave crickets. This is the only other scorpion other than the bark scorpion that lives in Central Texas, but is much less common and usually must be sought out by aspiring entomologists.

The Florida Bark Scorpion is an invasive species for Texas. It is venomous, but is not considered to be dangerous or deadly. Still, it is a mild cause for concern and a threat to safety as it has a tendency to set up in residential areas. It’s less common than the Bark Scorpion, but has been on the rise in the past five years as they’ve settled into the landscape.

This species actually originated in the tropics by boat, not from Florida as the namesake implies. It can be found hiding under stones and in wood piles, as well as inside houses. If found, it should be handled with care, but there isn’t much to worry about. These scorpions tend to survive well in captivity and are a common aquarium pet.

Unlike other types of scorpions, the Straight-Faced Solifugid is only able to walk on three pairs of legs, choosing to instead use their slender first pair as sensory organs. They also possess vertically curved jaws that can cause an incredibly painful bite. These jaws are actually the largest for their size of any terrestrial invertebrate.

They get the nickname “wind scorpion” for their speed and agility on normally rugged desert terrain. They aren’t venomous, but that’s because they can cause so much mechanical damage with their pincers that it isn’t required to stun prey. Because of this, they aren’t considered a “true scorpion” as they don’t produce any venom, but are still included in the family.

The Lindo Scorpion’s range extends from Western Texas to the north of Mexico that borders Texas. It’s a dark reddish brown color with a relatively short and sticky tail. They’re also known as the Digging Scorpion for the way they burrow in the desert sand, and are a close relative of the Emperor Scorpion.

This scorpion is actually quite slow growing and is assumed to be long lived. It’s also believed it can take up to 8 years to reach sexual maturity, which heavily contributes to this species being relatively unknown and commonly misidentified as Diplocentrus diablo.

This is actually one of the biggest scorpions in the United States and while it has a fearsome name, it’s mostly harmless and can’t cause any severe injury in humans. Allergic reactions are still a concern, so be careful when checking under rocks in and around San Antonio.

Its large size allows it to feed easily on other scorpions and a variety of other prey, including lizards and snakes. It gets its common name from the brown hairs that cover its body and help with water and heat retention, as well as to detect vibrations in the soil. Even though their venom is mild, this is still considered to be one of the more aggressive and active scorpions and should be handled with caution.

This is a medium sized scorpion that ranges throughout Texas and Northern Mexico. It lives in a variety of habitats and elevations and can survive at over 7,000 feet. They’re primarily a burrowing species and can be most easily found by using a blacklight to search under rocks and debris.

The sting of the Lesser Stripetail Scorpion is incredibly painful and can last anywhere between 15 minutes to an hour. It isn’t lethal and there are no real medical side effects after the neurotoxic venom leaves your system, but minor swelling and edema may be experienced during that time period. The females are supposedly more painful as they tend to be the larger of the sexes.