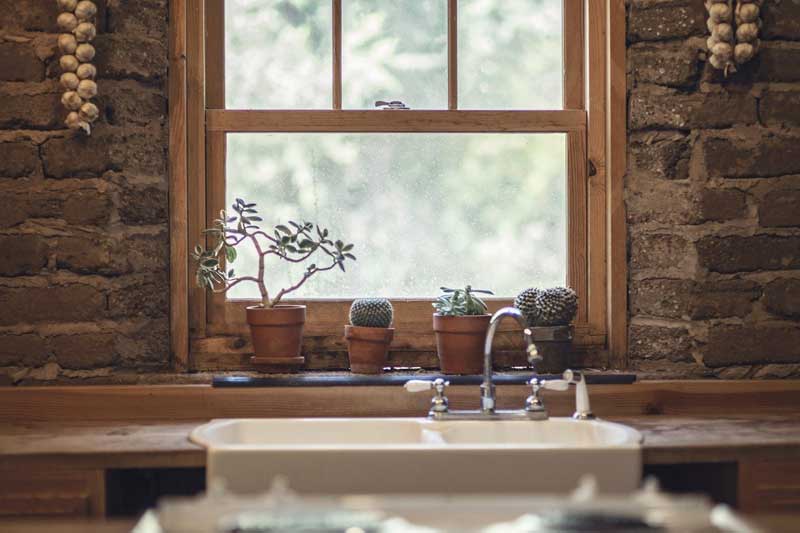 Given time, gnats will eventually go away on their own, but that can take weeks or even months. You want to get rid of them much sooner. So if you want to know how to get rid of gnats inside your house, keep reading because this article looks at 10 different ways.

Clouds of gnats flying around your home can drive you crazy. They like to fly into your face, getting in your mouth, eyes, nose and ears. They make the place feel dirty and unkempt, and they just don’t look good. Luckily, gnats are harmless. They don’t bite, they don’t carry disease, and they don’t cause damage to your home. None of that is a comforting thought when one of them flies straight into your eye, though.

The gnats in your house come in three varieties: fruit flies, fungus gnats and drain flies.

Of these gnats, fruit flies are the most distinctive with plump, yellow-brown bodies and red eyes. Fungus gnats have slender black bodies and proportionally large wings. Drain flies may resemble fruit flies, but they’re smaller and don’t have red eyes.

11 Ways to Get Rid of Gnats Inside of Your House

None of these gnats present any kind of danger to you. They don’t bite, and they don’t spread disease. They are, however, quite annoying, so you probably do want to get rid of them. Fortunately, getting rid of gnats is fairly simple, and there are many effective methods you can use. These are the most popular:

What can’t apple cider vinegar do? It’s list of uses is seemingly endless. Removing gnats with apple cider vinegar is easy. Pour some vinegar in a bowl and place it near where the gnats are- in the kitchen for fruit flies, close to houseplants for fungus gnats, and by the sink or shower for drain flies. They’re drawn to the sweet fruit smell, and when they try to land in the bowl the vinegar kills them. Adding dish soap makes it even more effective.

Clear fly traps can be remarkably effective at controlling gnat populations. Stick them on the walls near where the gnats congregate and you’ll be shocked at how many gnats they catch.

You may also like:  The 7 Types of Woodpeckers in Ohio (Pictures and Facts)

This only works for drain flies, but it’s very effective. You can dilute the bleach if you like, although it isn’t strictly necessary. Just pour the bleach down the drain where the gnats are living. It will kill the larvae and eggs. Do this once a week for a couple of weeks to ensure that the entire population is gone.

Mash up rotten bananas in a bowl, cover with plastic wrap and poke holes in it. The gnats are drawn to the smell, enter through the holes, and then they’re trapped.

Some types of baited traps can be more effective than sticky traps, but they work best for fruit flies. The flies are drawn in by the fruity smell, but are trapped and killed when they try to land.

Leave just a little bit of wine or beer in the bottle, and set it out near where the gnats are congregated. They’ll fly in to the bottle seeking the sweet liquid, and the narrow neck makes it hard for them to get out.

8. Use a Paper Cone and Fruit

This works best at night. Place a lit candle in a pan full of water, and turn off the lights. The gnats are drawn to the light of the flame, and either get caught in the fire and killed or fall into the water below, where they drown.

Cinnamon is a natural fungicide. While it’s harmless to gnats, it kills fungi, and fungus gnat larvae eat fungi. So, sprinkling cinnamon into the soil around your potted plants and then watering them can remove an important food source for fungus gnats.

If you’ve tried everything to get rid of gnats and nothing works, then maybe it’s time to spend a little bit of money and see if the latest gadget in insect control will work for you. Check out the Zap T360 Pro below.

If you’re having problems with gnats in your house, and don’t want to mess around, then the Zap T360 Pro is what you want. Great customer reviews specifically for killing gnats.

What Causes Gnats to be in Your House?

There are a few different things that can cause a gnat problem, depending on the type of gnat.

Fruit flies are drawn to the smell of overripe or rotting fruit, so leaving fruit out on the counter, or even leaving fruit in the trash can without emptying it for a while can draw them. So, too, will leaving out glasses with a little bit of wine, beer, or fruit juice still in the bottom.

Fungus gnats like moist soil, so over watering your potted plants is the most likely culprit. Drain gnats come when your drains have a bit of moisture trapped in them along with organic matter like dirt or hair.

See this article for more details on what causes gnats to be in your home.

A gnat infestation is one of the most frustrating things that can happen in your home, but gnats are really one of the easiest pests to get rid of. There are plenty of all natural, perfectly safe solutions for getting rid of them. You probably have some of the most effective gnat-removal products in your house already, and if you don’t, they can be purchased for very little money.

You don’t even need a professional to help you, which makes gnats much cheaper and easier to get rid of than almost any other pest. There’s no reason to put up with an annoying cloud of gnats any longer than it takes to pour some vinegar in a bowl.