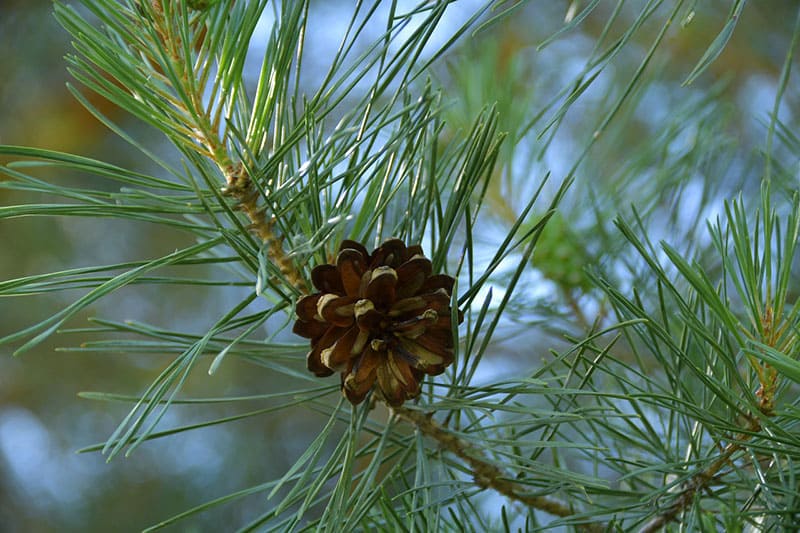 Pine trees are most well known for their iconic pine cones — the woody, scaled structures most people can find in their backyard, around their neighborhood, or in the nearby woods. Even though we’re all already familiar with pine cones, there are plenty of interesting facts and features about them you may not be aware of. One topic that is frequently confusing is how pine tree reproduce. Do pine trees grow from pine cones?

Pine trees are one of the most common coniferous trees around. There are about 100 different species of pine tree and most of them can be found in the northern hemisphere. Like other evergreen trees, pine trees keep their needles for at least two years. The way the needles are bundled together also indicate what type of pine tree it is. 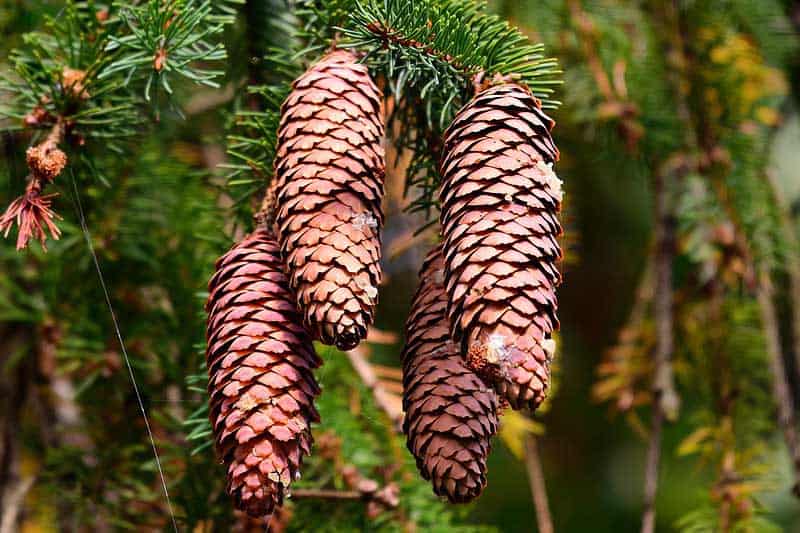 The short answer to this question is, yes they do, but the process is a bit more complicated than you might think.

Pine cones are used as a primary means of reproduction, but you can’t bury any old pine cone in the ground and expect it to grow into a pine tree.

The key to reproduction via pine cones are the male and female pine cones that can both be found on a single pine tree. The male cones (pollen cones) produce pollen during the spring and are different than the traditional pine cones we’re used to seeing. They’re the small cone clusters found on the branches.

A grain of pollen contains all the genetic information of the parent pine tree, and has special wing-like structures that allow the pollen to travel through the air.

The goal is for the pollen to land on receptive female cones (seed cones), which carry “ovules”. Once the pollen from the male cones lands on the female cones ovules, the ovule becomes fertilized and will turn into a seed.

The seeds remain inside of the cone and the cone will grow and harden around them. Pinecones often begin green and soft, and later harden and turn brown as they mature. Many of the cones remain closed around the seeds to protect them, then open up when conditions are optimal for the seeds to leave the tree and become planted.

Pine trees may actually vary their pine cone production year to year as a way of throwing off predators and to increase the rate of successful reproduction. 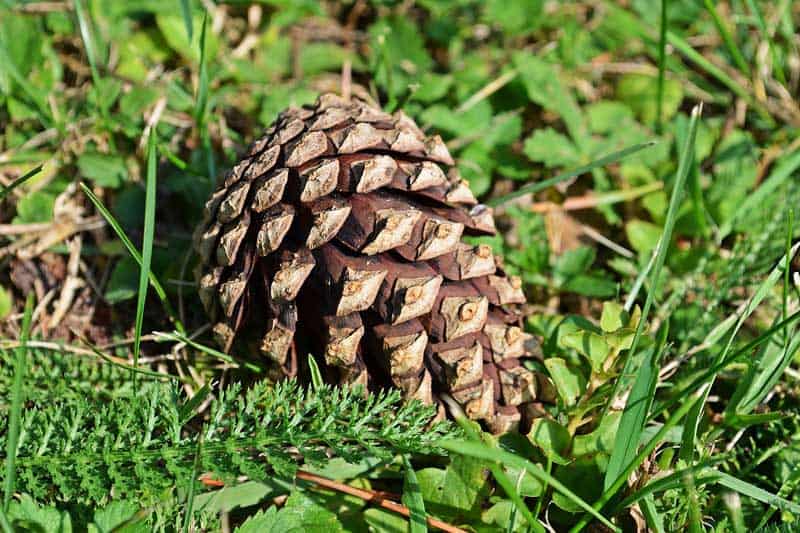 Where Are the Seeds in Pine Cones?

The pine cone itself is only a structure meant to protect the seeds inside. On each scale of a single female pine cone, there are two seeds held inside.

However, if you find a brown cone with open scales lying on the ground, it’s most likely already dispersed its seeds.

Pine cones tend to ripen and open in the summer and early fall while they’re still attached to the tree. The seeds are carried away by the wind, or eaten and then redistributed by animals.

You may also like:  Are Palm Trees Native to California?

What Are Pine Cones Good For?

There are plenty of reasons why pine cones are beneficial to trees, humans, and the environment.

In addition to acting as a shell to shield the pine trees seeds, 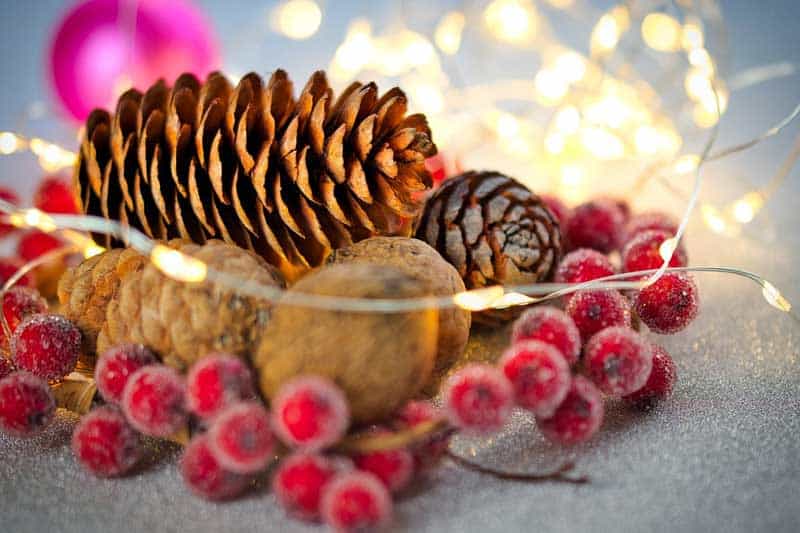 What Are the Advantages of Pine Trees Having Pine Cones?

Pine cones increase the survival rate of the next generation of pine trees by covering and protecting the vulnerable seeds inside.

The closed cone offers a barrier from natural elements such as weather as well as animals trying to eat the seeds. This gives the seed a safe environment to grow and develop before it’s released from the cone.

Can You Eat a Pine Cone?

You probably wouldn’t want to snack on a regular pine cone you find on the ground, but there are other ways to eat parts of the pine cone and tree.

Though the hard bark of the pine cone is edible for many different animals — the seeds, or pine nuts, inside are considered a treat for humans. There’s even a special kind of coffee made with pine nuts called pinyon coffee.

The young, tender green cones can also be boiled in order to make pine cone jam, which is similar to honey. The natural syrup found in this recipe has been used as a folk remedy for weak immune systems, asthma, and respiratory ailments for years.

Pine trees are made up of plant cells that have special organelles for different functions.

A very important organelle is the chloroplast, which produces energy through a process called photosynthesis. The chlorophyll pigment in the chloroplast is green and is why plants, leaves, and the needles of a pine tree are green.

Through photosynthesis, pine trees and other plants are able to produce oxygen. In addition to sugar in the form of glucose that is used for energy. 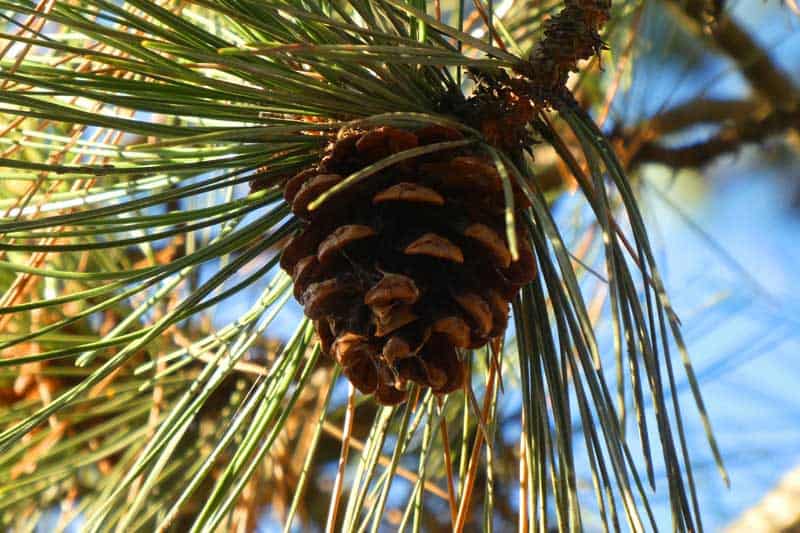 This process occurs in the pine tree needles. It’s there that stomata, a kind of pore, open up to absorb carbon dioxide.

Do Other Evergreen Trees Produce Oxygen?

What makes pine trees and other evergreen trees special is that they stay green all year round. Unlike deciduous trees that lose their leaves in the fall.

The advantage of this is that evergreen trees can photosynthesize during the winter and consistently produce oxygen. However, in the winter the rate of photosynthesis is lessened due to colder temperatures and decreased sunlight.

You may also like:  Types of Deciduous Trees (30 Examples)