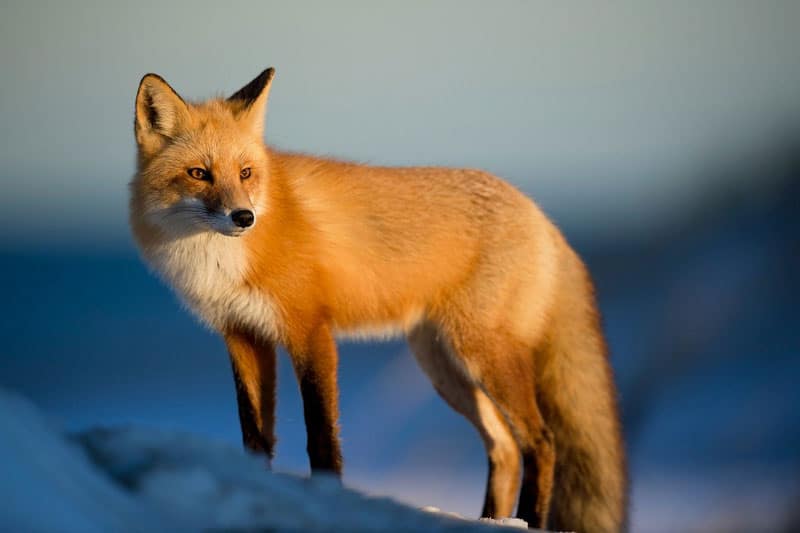 Foxes usually are solitary and prefer to stick to themselves or with their own small family. Because of this, staying mostly hidden during daylight hours serves to protect them from falling prey to other animals and helps them avoid humans. As urban development continues to increase, foxes living in areas near humans are learning to adapt their behavior accordingly.

The short answer is yes, most foxes are nocturnal.

Foxes are nocturnal with a few exceptions. In some cases, such as during mating season, they will tend to be more active during the day. They can also be crepuscular – which means they may venture out at dawn and dusk, as well as on cloudy days. In environments where they feel safe, such as an area with few other predators, they will also be more likely to be active during the day.

Why Are Foxes Nocturnal?

Did you ever wonder why foxes mostly come out at night?

The reason for this is because foxes have adapted to their environment and choose to do most of their hunting when they feel safest. At night, their chances of coming into contact with humans or other predators is much less. Although technically nocturnal, foxes – like coyotes – are opportunistic feeders. This means they will be seen out on the prowl at whatever time of day most benefits them. They will especially adapt their activity around human activity.

Foxes living in urban areas are especially likely to be nocturnal because they have learned that they can safely venture out at night when most people are asleep. However, as new generations of fox families learn that humans pose them no threat, in some urban areas foxes are growing gradually brave enough to be seen more often during daylight hours.

What Do Foxes Do At Night?

The night hours are the prime time for catching all sorts of prey. This is when most foxes like to come out to hunt. Their strong sense of hearing helps them to find their prey easily even in the dark. A keen sense of smell and sharp eyesight help too.

As omnivores, foxes eat a variety of small animals, birds, reptiles, fish and insects. They also like to eat fruit such as berries or apples, acorns, tubers and other vegetation. But in general, foxes are scavengers and opportunistic hunters that will eat pretty much whatever they can scrounge up – including garbage from your trash can!

Sometimes they themselves fall prey to other, larger nocturnal creatures like wolves or bears. Because of this, you may even hear a fox family calling to each other in the middle of the night, warning of a predator nearby.

Do Foxes Ever Come Out During The Day?

Foxes will typically spend most of the daylight hours sound asleep in their underground dens.

Sometimes though, foxes do come out during the day. There are a few times when foxes are more likely to be seen outside of their “normal” hours.

It is a myth that foxes never come out in the day unless they are sick, rabid or injured. Although this can be a possible reason, daytime activity also increases during mating season and also when a new litter of pups has just been born. This is generally in the winter and spring months.

In addition, during food shortages you are more likely to see a fox venturing outside during daylight hours out of hunger and desperation. Sometimes they are simply choosing to hunt for an animal that is more active during the daytime, such as birds or squirrels.

Are ALL Types of Foxes Nocturnal?

The Channel Island Fox is one example of a fox breed that is diurnal, meaning they are more active during the day. Due to their isolated island environment, they have no nearby predators that pose a threat and so are safe to venture out any time they wish. Left to their own devices, they will hunt during the day with peaks in activity around dawn and dusk.

The island fox is descended from the gray fox, which IS nocturnal. This difference shows us that foxes have most likely become nocturnal out of environmental pressures and not actual preference.

What Should I Do If I See A Fox?

If you happen to come across a fox in the wild or in your neighborhood, don’t panic! As the old adage goes, they are more scared of you than you are of them! As long as you don’t disturb their habitat or go after a mother fox’s young, you should be fine.

Most of the time foxes are harmless towards humans. However, they can carry rabies, so there is a small chance that they could be rabid. If a fox is exhibiting any signs of rabies such as foaming at the mouth, walking lopsided or any other strange behavior – be extra cautious not to go near the creature and retreat to safety.

As we’ve reviewed above, foxes are generally nocturnal although with some exceptions. However, their behavior in environments with few predators where they feel safe shows that their natural tendency actually leans more towards a diurnal or crepuscular activity pattern.

Right in line with their reputation as sly, smart creatures – foxes have learned to adapt their behavior for maximum comfort and survival chances. They will hunt whenever it is the most convenient for them, eat whatever tasty food they can find and venture outside to play or mate when they feel it is most safe.