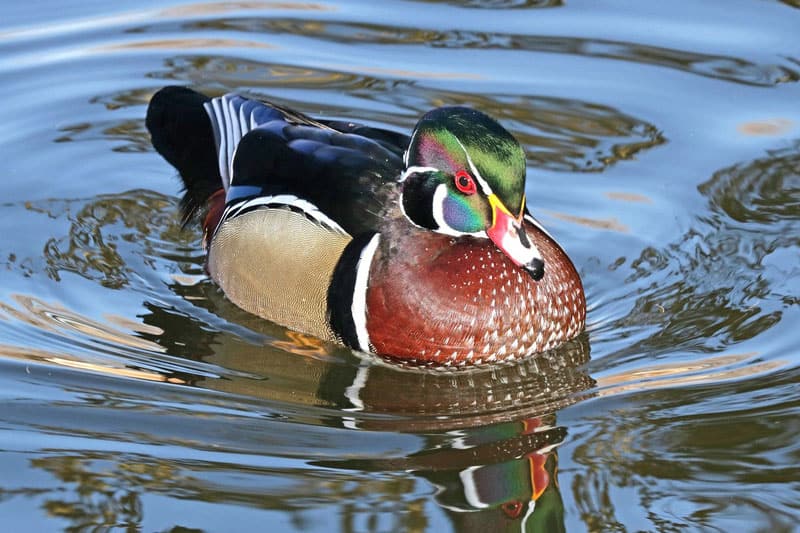 Wood Ducks are medium sized ducks with some extraordinary colors and patterns, they can be found throughout most of the eastern half of the United States. As with most other types of birds females are not as brightly colored as males, but they are always a treat to see and maybe even grab a picture of.

Let’s jump right into some interesting facts about Wood Ducks.

A female wood duck lays anywhere from 6 to 15 eggs. A nest can hold up to 40 eggs though. If a female can’t find a good place to lay her eggs, she will use another wood duck nest that already has eggs in it.

2. They were hunted nearly to extinction

Due to over-hunting as well as destruction of habitat, wood duck numbers were very low in the late 1800s and early 1900s . It looked like they were headed for extinction. Due to conservation efforts, their numbers are now on the rise and there are thought to be over a million wood ducks in North America now.

Other common names for the wood duck are:

4. They perch and nest in trees

This is how they got the name wood ducks, because they perch and nest in trees.  Typically very close to water or even hanging over water. However sometimes they will nest as far as a mile from water, never too far though.

5. Male Wood Ducks are the most vividly colored ducks

6. Wood ducks will use nest boxes

Finding nests can sometimes be difficult for wood ducks because of their nesting preferences. If the right type of nesting box is provided in the right location, they will use them.

It’s no secret that male birds are more brightly colored than female birds, it’s no different with wood ducks. The reason for this is so that the males can show off and attract females.

Precocial means when the babies hatch they can immediately swim and find food on their own. Even so, they remain with mom for some time. They can even climb down 8 feet or more to get out of the nest they were born in by using a special tooth on their beak.

Wood ducks form pairs in January and begin mating in the spring. They are thought to be seasonally monogamous, meaning male wood ducks may find different mates each year. So they don’t necessarily mate for life.

10. Their feet have sharp claws

This is an adaptation for climbing and perching in wood ducks. They are one of the few species of ducks in the world with strong claws that allow them grip bark and climb trees.

11. They can interbreed with mallards

Wood ducks have been known to interbreed with mallards (and other species) creating a hybrid breed of duck. Although it is commonly known that most waterfowl hybrid offspring end up infertile.

You may also like:  20 Birds of Prey In Tennessee (With Pictures)

12. Wood ducks have no relatives in North America

The Mandarin Duck of eastern Asia is the only known relative to the North American Wood Duck.

After the mother has left in just 8 short weeks, baby wood ducks are ready to fly. They can jump from heights of 300 feet without injuring themselves while learning to fly.

As mentioned, wood ducks have particular nesting requirements. They will commonly use abandoned woodpecker holes or those from other animals to nest and lay their eggs.

Aside from their extremely vibrant colors, male wood ducks are easily recognized by their red eyes.

16. The male is called a drake

Male ducks are referred to as drakes, females are the only ones that are called ducks.

17. They sleep on the water at night

Females with young sleep out of water, preferably on the bank or on logs and away from danger. Most wood ducks roost and sleep on the water.

They are one of the only species of ducks known to commonly produce more than 1 brood in a year.

19. They can swim underwater

When diving for food, ducks are able to reduce their oxygen consumption and remain underwater for a minute or sometimes longer.