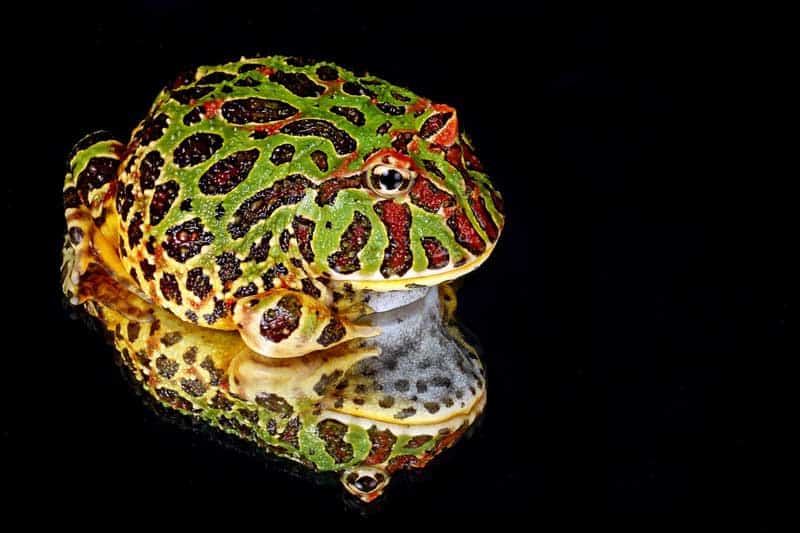 The Pacman frog is one of the most interesting species of frogs on the planet hands down. I used to have one as a pet as a kid and while he didn’t move around much, he was super interesting to feed and take care of. In this article we’ll go over some fun facts about Pacman frogs, otherwise known as South American Horned Frogs.

1. They get their name from the classic arcade character

Pac-Man Frogs get their name from their almost abnormally round body, enormous mouth, and their habit of eating anything that moves in front of it. Their mouths are as wide as their body and they’ll often try to eat animals bigger than they are with it. Definitely one of the more memorable facts about Pacman Frogs.

2. They are also called the South American Horned Frog

This name comes from the “horns” above their eyes. Of course, these aren’t real horns made of bone, but rather flaps of skin that stick up over their eyes. They’re believed to be used to help with camouflage, as they can look like leaf stems flowing in the wind.

There are a total of eight known species under the umbrella term “Pac-Man Frog” that all have the same large mouth and body shape. They vary by region with the majority located in Brazil in the Amazon Basin.

4. They’re naturally found in and around freshwater marshes and pools

Like most frogs, the Pac-Man Frog requires freshwater for reproduction as well as for a water source. However, these frogs are not very good swimmers and once they leave their birthing pond, they’ll only return to the water to lay their own eggs.

5. They make great and interesting pets

This is a very resilient animal and incredibly easy to care for animal. Their eating habits ensure that they’ll always be eating, and they can be fascinating to watch for all ages.

6. You shouldn’t handle them with bare hands

If you do end up having one as a pet, it’s important to know their skin is very sensitive. The oils from human skin can irritate their skin and interfere with their breathing, so this is a pet made more for observation than for interacting with.

7. They’re ambush predators that live on the forest floor

These frogs love to bury themselves in the cool mud or among the leaves on the forest floor and wait for food. Only their eyes can be seen popping out.

8. They spend most of their time sitting and eating

With their voracious appetite, these frogs will eat anything that happens to wander by their hiding spot. Anything that’s alive that comes within grabbing distance will be eaten immediately.

Their tongue is used to pull their prey into their gigantic mouths, usually the smaller animals like insects.

10. For bigger prey, they’re capable of launching themselves 2-3 times their body length

Their powerful legs are able to literally throw their mouth at something, such as a mouse, rat, bird, or any other Pac-Man Frog that happens to cross their path.

You may also like:  Do Snakes Have Emotions? Well, Sort of

These frogs aren’t picky. If you’re having one as a pet, they should never be housed with other animals or even others of their species. It’s common for the female to try to eat the male following mating, similar to a praying mantis, but it also isn’t unheard of for the males to attempt to swallow the female as well.

12. The female is bigger than the male

The female usually ranges from four to seven inches long, while the male clocks in at two to four inches. This size difference is usually why it’s the female who tries to eat the male, and is the usual way to determine the sex of the frog.

13. Males are more colorful than the females

The female frog tends to be more on the tan side to blend in amongst more dead leaves, but the male will range from a deep green to a lime color.

14. Pac-Man Frogs are one of the only frogs with teeth

These teeth and bony protrusions on their jaw are used to “lock in” prey in their big mouth, similar to bars on a jail cell. They’re also fully capable of drawing blood, so be sure to use caution when handling!

15. The larger Pac-Man frogs have a bit force just as strong as mammalian predators of the same size

Because of their diet of things like lizards, insects, mealworms, mice, and other frogs, they need to be able to close their mouth quickly to lock in these also very fast animals.

16. They swallow their prey whole

Even though they have teeth and a strong bite force, they don’t chew their food and opt to swallow it whole. Pac-Man Frogs have been known to accidentally suffocate themselves by trying to swallow something bigger than themselves.

17. When their habitat is dry, their outer skin will toughen up and dry out

This unique mechanism keeps their inner skin nice and moist and will stay this way until they have access to water again, usually in the form of rain. Once rehydrated, they’ll shed this hardened skin and then eat it.

18. Baby Pac-Man Frogs are as small as quarters

Like all frogs, they start their lives as tadpoles in a local water source and develop into their mature state. They’re ready to leave their watering hole and start eating bigger food when they’re the size of a quarter.

Another one of the more interesting facts about Pacman Frogs is that they have a rather long lifespan. With the right care and attention, this is a pet that will be with you about the same time as a dog. Keeping the temperature, humidity, and food consistent and abundant will ensure your frog will live a long and happy life.

This simply means they’re most active at night. They have relatively good night vision that they use when ambushing the other nocturnal animals moving around them.

You may also like:  Water Moccasin vs Cottonmouth - What's the Difference?

21. They go into hibernation during the winter months

This process is called brumation. The frog will shut down all nonessential functions until the warmer months of spring which generally brings a greater abundance of food.

22. They sleep with their eyes open

Like most frogs, the Pac-Man Frog doesn’t sleep with its eyes closed. They do have eyelids and will hibernate with them closed to preserve moisture, but otherwise they prefer to keep their eyes open and on the lookout.

23. Unlike most amphibians, they reproduce internally before laying the eggs

Most amphibians will lay their eggs in the water and leave, waiting for the male to come by and fertilize them. However, the Pac-Man frog fertilizes the eggs inside of the female and then she will find a suitable pond to lay her now fertilized eggs in.

This is the average brood size, and it isn’t unheard of for the numbers to push 2,500 or more. Many of these eggs won’t survive and may be eaten by fish or other aquatic creatures, so this ensures the survival of as many as they can.

25. The female is much quieter than the male

The female Pac-Man frog will rarely make noise and instead chooses to wait quietly for prey or for a mate. The male on the other hand will constantly be chirping or croaking in order to search for a mating partner.