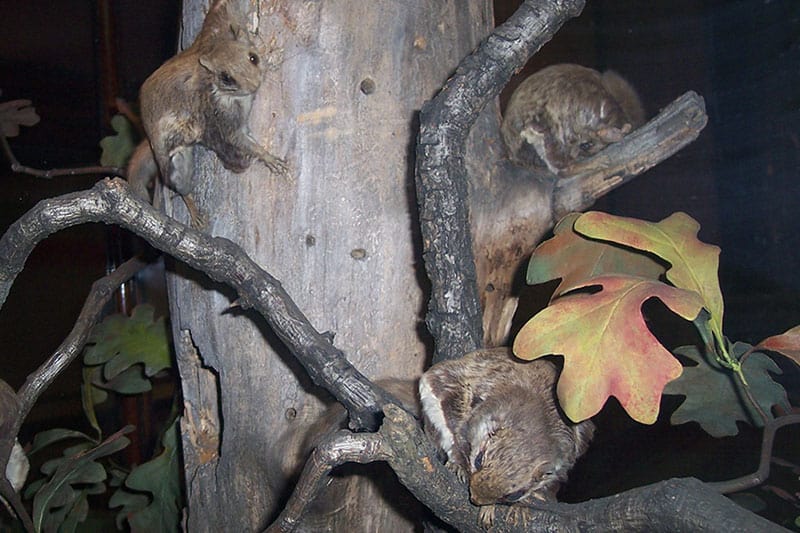 Flying squirrels are some of the most spectacular, and secretive, squirrels on Earth. Bats may be the only mammal that truly flies, but flying squirrels do have the unique ability to sail from tree to tree on a special membrane between each front and back limb. To better understand this intriguing animal, here are 25 interesting facts about flying squirrels and why they’re the neatest animal you may not have known was in your backyard.

1. They have giant eyes designed for night vision

Flying squirrels are nocturnal animals, meaning they’re active mainly at night. Having large eyes allows them to collect more light – an adaptation shared by many other nocturnal animals such as owls and lemurs. These large eyes make them especially adorable to humans, and their gigantic pupils make them appear almost entirely black.

2. They glow in the dark

Only recently have scientists discovered that Flying Squirrels glow under ultraviolet light. They glow an almost neon pink, with the colors more vibrant on their undersides. We still aren’t entirely sure why they do this.  It could be for a multitude of reasons, from avoiding predators at night to communication to the ability to navigate snowy terrain.

3. Their “wings” are called patagia

A Flying Squirrel has a furry, parachute-like membrane between their front and back limbs. These flaps catch air as the squirrel falls, which allows it to gently glide to its next destination rather than falling to the forest floor.

4. Flying Squirrels have an extra finger

Attached to their patagia, Flying Squirrels have a wrist spur that extends out when their “wings” are spread. This extra finger allows them to stretch the patagia farther than it would with just their tiny arms and thereby catch more air and glide further and smoother.

It’s no surprise that one of the most interesting facts about Flying Squirrels is that on average, they can glide approximately 65 feet (the length of a bowling lane) from tree to tree. However, when needed, this squirrel can glide up to 300 feet, AKA the length of a soccer field. Even the largest Red Giant Flying Squirrel, which grows nearly three feet long, is still able to travel this distance.

The Flying Squirrel is remarkably agile. It uses all of its limbs as a sort of rudder to guide the fall. Their strong limbs paired with a fluffy tail and powerful patagia muscles can even allow them to pull off semi-circles in a single glide and completely reverse their direction.

7. 90% of all Flying Squirrel species exist only in Asia

Wild flying squirrels can be found on three continents – North America, South America, and Asia. Of all 43 known species of Flying Squirrel, 40 of them reside in the Asian continent. It’s believed that the dense forests that were on there during glacial periods protected the Flying Squirrels that made their homes in the large trees, leading to lots of diversification to fill all niches of their environment.

8. Flying Squirrels have been around for roughly 160 million years

These are some of the most primitive mammals that still exist today. There are many exquisitely preserved fossils of species that are ancestors to the modern Flying Squirrel that had wing-like sheets of skin stretched from their cheeks to their legs and tails.

9. There are only 3 species of Flying Squirrel native to the New World

Even though these species span over a wide area with a wide range of habitats, there are only three compared to the 40 in Asia. There’s the Northern Flying Squirrel in Canada and the upper parts of the United States, the Southern Flying Squirrel in the American Southeast, and the Humboldt’s Flying Squirrel which was identified as a species in 2017 and much is still unknown about it, including its natural habitat.

If your local ecosystem has a fair amount of old-growth trees, it’s likely that you also have Flying Squirrels in your backyard. They go mostly unseen because they’re nocturnal, unlike their Gray Squirrel counterparts, and the cover of darkness camouflages them well. They’re also fond of attics, making them a pest for some surburbanites.

11. Flying Squirrels communicate with one another

These squirrels make very high pitched noises that the human ear needs to strain to hear at times. They usually make these noises the first several hours following sunset in order to communicate location and potentially the best locations for food. The frequency of these calls can be far higher than anything a human ear could discern.

Flying Squirrel mothers nurse their young for 65 days, which is practically unheard of for an animal of this size. Their babies are born hairless and helpless. They’re uncoordinated and incapable of even rolling over, let alone taking care of themselves, but eventually they’ll become independent by 4 months.

They use these as backup nests in case their primary nest is put in danger. If there is something like an attack from a predator or a forest fire, the mother will gather up her offspring and carry them to their secondary nest where they’ll hopefully be safe again.

This is the term for when during the colder months, the Flying Squirrels’ metabolism will slow down and they’ll spend more time in their nests and less time foraging. They’ll still venture out, but certain body functions are slowed down in order to best conserve energy.

15. They cuddle for warmth

It isn’t just within family members either. It’s very common for whole groups of Flying Squirrels beyond just immediate family will share a nest with one another to share body warmth.

16. They’ll share their nest with other types of wildlife

Huddling for warmth is so important that if there aren’t any other Flying Squirrels around, they won’t be picky. It’s been well documented of Flying Squirrels sharing nest with bats and even screech owls.

17. Some flying squirrels are larger than a house cat

Here’s a cool fact about Flying Squirrels. The American species are relatively tiny compared to some of their Asian counterparts. They’re known as Giant Flying Squirrels, and they can grow to be more than 3 feet long and over 3 pounds. They thrive in central and southern China and are not endangered.

18. They use their thick paws as cushions

When gliding, the landing can be just as important as the jump. Flying Squirrels use their claws to dig into tree bark and climb back up, but the fur and pads on their paws help to brace themselves for impact and absorb some of the kinetic energy.

19. Flying Squirrels form a single hole in the nut shell when eating

Most squirrels break the whole shell to release the hidden meat, but not flying squirrels. They use their claws in order to pull the meat out for themselves. Just like their Gray counterparts though, they do store and bury some of these nuts, contributing to the growth of more trees and stimulating the environment.

Because of all of the energy they expend climbing and jumping and gliding, it’s extremely necessary to keep a constant food supply. They forage for the majority of the night during the warmer months while sleeping during the day and will store their nuts in their nest or bury them throughout the forest.

21. Southern Flying Squirrels are considered one of the most carnivorous squirrels

All Flying Squirrels are omnivores, but Southern Flying Squirrels have been known to supplement their diet with eggs, birds, and carrion. This can be especially jarring to see, but it’s completely natural and they too help to clean up the forest along with other scavengers.

22. They were the inspiration for base jumping

Base jumping and some forms of skydiving use a suit that resembles the patagia of the Flying Squirrel. Just like this rodent, it allows humans to glide for long distances and slow their descent. The developers of these suits actually studied the Flying Squirrel to determine everything from the tensile strength of the fabric to mimicking their extra finger to keep the fabric tight.

These dwarf flying squirrels can be as small as 7 centimeters long with their tail the same length as their body. These tiny mammals can often be mistaken for larger butterflies in the tropical rainforest they live in.

During mating season, it’s the females that compete for territory and the opportunity to mate. They’re fiercely protective of their children as well once they’re born. They’ll stand their ground against much larger animals in order to save their babies.

25. The male doesn’t have a large role in raising the young

Very little is known about the mating system of Flying Squirrels, but it is known that the makes typically leave before the litter is born and rarely returns. It’s been hypothesized this means the species is polygamous with the males siring multiple litters, but also the females having litters from many males which is much more rare in the animal kingdom.