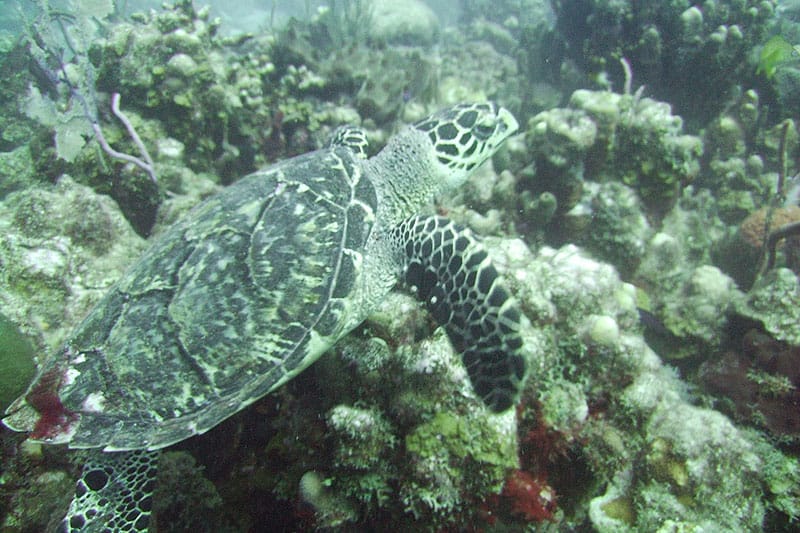 The Hawksbill Sea Turtle is considered to be the most beautiful of sea turtles for its colorful shell and distinctive look. They’re found in tropical waters around the world, and are some of the most popular attractions at aquariums. Here are 25 cool and interesting facts about Hawksbill Sea Turtles, some truly amazing animals that inspire so much joy and awe.

The Hawksbill Sea Turtle has a very distinctive narrow head and a sharp, bird-like beak that helps it to reach into cracks and crevices of coral reefs to look for food. It’s strong and hooked, similar to a bird of prey, in order to crack through coral to get to their preferred food.

2. They feed almost exclusively on sponges

Without the Hawksbill’s unique role in coral reef maintenance, these sponges would be able to overgrow corals and suffocate reefs. These sponges are toxic to other animals but not the Hawksbill, which means very little competition for them.

Unlike many sea turtles that swarm the beaches in droves when it’s egg-laying season, the Hawksbill prefers to nest in low densities on small, scattered beaches. The females are well adapted to even crawl over reefs and rocky areas to reach truly secluded nesting sites.

4. They nest nearly 4 times per season

Each nest contains approximately 140 eggs, although some nests may contain over 200. These layings are spaced out at 2-week intervals, which means that’s a maximum of 800 eggs laid in 2 months!

The Hawksbill Sea Turtle is listed as Endangered within the United States due to habitat reduction and adults being captured for illegal animal trading or eating plastic thinking it’s a jellyfish. Throughout the world they’re considered to be Critically Endangered and at risk of extinction.

6. The largest populations occur in the tropical seas

Namely, they tend to congregate in the Caribbean Sea, the Seychelles, Indonesia, Mexico, and Australia. They aren’t found in the Mediterranean however, and very few are found in US waters. Even fewer nest on Florida beaches, preferring the tropical sands and secluded beaches around islands.

7. They were almost hunted to extinction

The Hawksbill Sea Turtle has a gorgeous shell, the design on which is known as “tortoiseshell”. It’s traded internationally to be used in things such as jewelry and other decorative items. The international trade of their shells is now illegal, but that hasn’t stopped black market trade of this highly valued commodity.

8. Their flesh is harmful to humans

Because of their sponge diet, eating a Hawksbill Sea Turtle may cause serious illness and, in extreme cases, even death. Sponges contain toxic compounds that accumulate in the animal’s tissues that may not harm them, but definitely harm us.

9. One turtle can consume over 1,000 pounds of sponges per year

These animals are constantly grazing around the coral reef. They leave the coral itself alone while foraging for the sponges that make up its diet.

10. Their shell starts out heart-shaped

When the Hawksbill Sea Turtle is first born, their upper shell appears to be heart-shaped. It elongates as they mature into the more recognizable oval.

11. They have claws on their flippers

These claws are used to help traverse the coral reef and latch on to better get to the sponges. The males have longer claws than the females. They also use these to traverse the sea floor, leaving asymmetric trails for divers to observe.

Even though these sea turtles do migrate, they prefer to stay alongside the coastline to keep a ready supply of sponges and nesting sites within reach.

13. They leave the sea to lay their eggs on the beach

This turtle will return to the site where they themselves were born, lay their eggs, and then return to the sea while leaving the eggs behind. They’ll remain buried until about 60 days later when they hatch.

14. The most dangerous time of their lives is right after they’re born

Hatchlings need to make the journey from their home nest inland to the ocean. Crabs and gulls are common predators who prey on the young turtles during this short scamper.

It takes many years before the hatchlings are ready to deep dive like their parents. They prefer to float at first and grab any sponges or other animals that live in the shallows before they’re able to go deeper and grab larger sponges from the sea floor.

16. Adult hawksbills can hold their breath for up to three hours

Even though they have this ability if they really need it, they still prefer to surface every 15 to 30 minutes. This is especially useful during tropical storm seasons, as they make it more difficult to surface often. The deeper you go, the calmer the waters are.

17. Research suggests there are only 5 populations worldwide

This makes it very difficult to know the exact number of Hawksbill Sea Turtles in the wild. These populations are made up of around 8,000 turtles.

Despite mostly eating sponges where the competition is low, they’re also known to eat sea anemones, mollusks, and jellyfish.

19. They’ve existed for the past 100 million years

Just like crocodiles and many other reptiles, the sea turtle is rather primitive and hasn’t changed much within the past couple million years. They’ve been a fundamental link in the ecosystem far longer than humans have even been on Earth.

20. Humans are their biggest predator

The Hawksbill Sea Turtle’s hard shell is a very good deterrent to classical predators. They do occasionally fall prey to sharks, crocodiles, and octopuses, but their biggest threat is humans still hunting them for their beautiful shell. This is definitely one of the facts about Hawksbill Sea Turtles that doesn’t come as a surprise to most people.

21. They have prefrontal scales

These are scales that go in front of their eyes between the eye socket and the nose. These help them to be more aerodynamic throughout the water and offers the least resistance when swimming.

22. They help other fish eat too

In their search for sponges, the Hawksbill Sea Turtle will often break off pieces of the coral reef itself with its beak. This allows other fish to gain access to areas they otherwise would be unable to fit into.

The Hawksbill’s shell is multicolored, and its color varies depending on if it’s in warmer or colder water. In colder water it takes on a darker color, believed to absorb more heat, and in warmer water, it lightens to a gentle amber color.

Even though there are large populations of this turtle, they only meet up with other turtles every two years or so to mate before continuing their journey. They can live up to 50 years old in the wild.

25. They’ve been known to be bioluminescent.

Only recently did a diver realize that by shining an ultraviolet light on a Hawksbill Sea Turtle that it was able to light up! It’s unsure whether this is from their unique diet or from bioluminescent microorganisms living on their shell, but either way, what a sight to see on the coral reef.