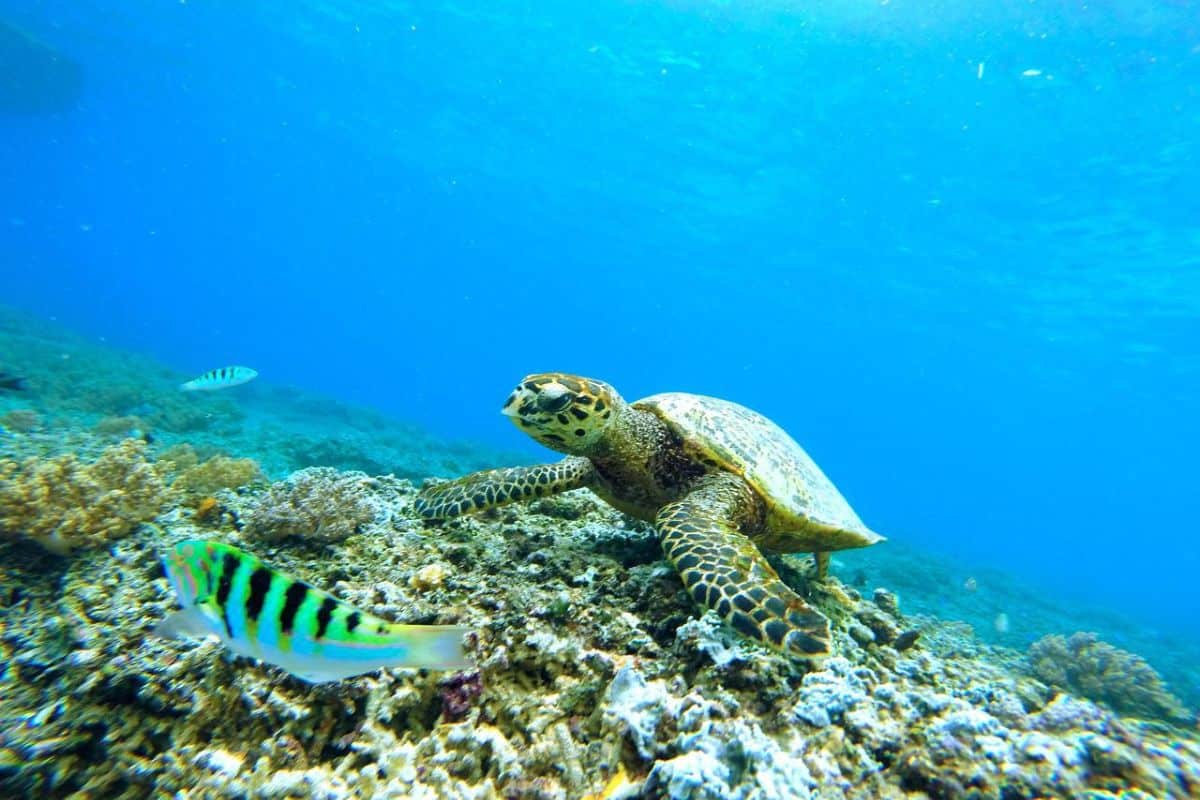 Did you know that there are over 700,000 different species of animals that live in the ocean? Scientists are still uncovering new species every day exploring the furthest depths of the sea.

You will be surprised at some creatures you never even knew were animals. In this article, we’ll look at animals that live in the ocean.

20 Animals That Live in the Ocean

Many different types of animals live in the ocean, but one of the most popular and well-known animals is the whale. Whales are highly intelligent marine mammals.

The blue whale is the largest animal on Earth and can weigh up to 200 tons. Humpback whales are much smaller but still enormous animals and eat huge amounts of plankton.

Orca, also known as killer whales, behave like wolves in the sea, hunting in family pods and working together to capture prey. They hunt seals, sea lions, and walruses in arctic waters.

Dolphins are intelligent, playful, and friendly creatures that have captivated people’s hearts for centuries. They are easily trained and put on a wonderful show for spectators at marine mammal exhibits.

While most dolphins live in saltwater oceans, some species live in freshwater rivers and lakes. For example, the Amazon river dolphin lives in freshwater and is almost pink colored.

When people think of dolphins, the bottle-nosed dolphin is often the species that comes to mind. However, there are 38 different species of oceanic dolphins.

Sea turtles are fascinating creatures that have been around for millions of years. These gentle giants spend their lives in the ocean and can live over 100 years old!

There are seven species of sea turtles, and all of them are endangered. Sea turtles are threatened by pollution, fishing, and climate change.

Most female sea turtles will return to lay eggs on the beach where they hatched. Thanks to conservation efforts, sea turtle populations are improving by scientists taking the eggs.

Eggs are kept safe until hatching. Then, early on a summer morning before sunrise, hatchlings are released to the sea in the most natural way possible on the beach, where they will return.

These predators have been around for millions of years and are perfectly adapted to their environment. There are over 500 shark species that come in all shapes and sizes.

Some sharks live in deep water, while others prefer shallow coastal areas. Some species are even able to live in both fresh and salt water.

Despite their reputation, sharks are not mindless killing machines. On the contrary, most species of sharks pose little threat to humans.

The largest shark in the world is the whale shark. This docile giant is a filter-feeder, meaning it strains food out of massive amounts of water it takes in as it swims.

Jellyfish have survived for millions of years and are thought to be one of the oldest groups of animals on Earth. They live in all depths of the ocean, from the surface to the deep sea.

Jellyfish are carnivores and feed on smaller animals like plankton and fish eggs. Some jellyfish species can grow over six feet long, but most are much smaller.

Jellyfish come in various colors, from pale white to bright red or yellow. Some species even glow in the dark!

Sea anemones are called “flowers of the sea,” but they are not actually plants. Instead, they’re living animals that feed on marine life like plankton, fish, and small crustacean.

They are covered in tentacles. The anemone captures prey with its tentacles before killing it and ingesting the meat. The tentacles can be retracted or expanded to catch prey.

Some sea anemones form symbiotic relationships with hermit crabs, small fish, or other animals for mutual benefit. For example, you might be familiar with their relationship with clownfish.

The clownfish is covered in mucus that allows them to live inside the anemone without feeling its sting. Likewise, some crabs get covered in the anemone stinging cells to ward off predators.

Starfish are intriguing animals that live in the ocean. They are easily recognized by their five arms and can be found in various colors.

Starfish are predators and scavengers. They use their tube feet to move across the ocean floor and to capture prey.

Starfish are found in all oceans, from the shallow waters of the intertidal zone to the deep sea. They are close relatives to sand dollars and sea cucumbers.

If you cut off an arm of a starfish, it can regenerate it. They also reproduce through asexual modes.

Octopuses come in many different colors, but they are often brown or green. They can change their color to match their surroundings.

An octopus’s diet consists mainly of crustaceans, mollusks, and fish. They use their beak to puncture and tear their prey into small pieces they can then suck up and consume.

Octopuses are known to squirt ink in the water if they feel threatened. Then, they quickly bolt after distracting a predator with the ink cloud.

Believe it or not, coral is colonies of living animals. For example, tiny plankton-eating invertebrates colonize reefs around the world. These tiny animals are called polyps.

Polyps belong to the same family as sea anemones and jellyfish. They react to their environment through sensitive and complex nervous systems to capture prey with tentacles.

Coral reproduces both asexually and sexually. An individual can divide to make new organisms, and they can also release eggs and sperm to meet in the water.

The sand dollar is a small, flat, disk-shaped creature that lives buried in the sand on the ocean floor. These enchanting little animals are a type of sea urchin and are related to starfish.

Sand dollars are covered with small spines that help them move around. Their spines also help them dig through the sand. They feed on the seafloor on algae and other tiny organisms.

After they die, sand dollars leave behind a delicate beautiful little hard skeleton shell. The skeleton of the sand dollar is what you find washed up on the beach.

The name might fool you but the sea cucumber is not a vegetable at all. Instead, sea cucumbers are a type of echinoderm, a group of animals that includes starfish and sea urchins.

Fish and other predators often eat sea cucumbers, but they have an adaptation to avoid being eaten. Some species can eject their guts out of their mouths as a distraction.

Sea cucumbers inhabit all the world’s oceans, from the shallows to the deep sea. Most species are less than a foot long, but the giant California sea cucumber grows up to 1 foot 8 inches.

If you’re a fan of seafood, then you might be a fan of shrimp. These little crustaceans are not only delicious but also one of the most popular seafood items in the world.

Shrimp are found in all sorts of different habitats in the ocean. Some species live in deep water, while others are found in shallow areas near the shore.

Shrimp are essential members of the marine ecosystem. As prey to various sea life, they play a vital role in the food chain.

Crabs are one of the most popular animals that live in the ocean. They are easily recognizable with their flat wide shell and large claws.

As scavengers, crabs will eat just about anything they can find. They are known for being good cleaners of the ocean floor.

There are over 4,500 species of crabs! Most crabs live in salt water, but a few species live in freshwater. The largest species is the Japanese spider crab with a leg span of over 13 feet.

The Portuguese Man O’ War is a fascinating creature that lives in the ocean. It is a floating animal with a gas-filled sac that keeps it afloat.

The Portuguese Man O’ War has long, stinging tentacles to capture its prey. They are very similar to jellyfish and often wash up on beaches.

The stings from these tentacles are painful and can even be dangerous to humans. If you are stung by a Portuguese Man O’ War, you should seek medical help immediately.

Lobsters are one of the most popular seafood items in the world and represent high-end dining and luxury. They are crustaceans that have a hard outer shell and two large claws.

Lobsters are bottom-dwellers and scavengers. They eat just about anything they can find, including other lobsters.

The lifespan of a restaurant lobster is about 5 to 7 years. In the wild, however, lobsters can live to be over 50 years old. Their long lifespan can be attributed to having few predators.

Clams are a type of shellfish that live in the ocean. They are filter feeders and use their siphons to pump water in and out of their bodies to collect food.

You may also like:  4 Types of Marine Mammals With 16 Examples

Clams are found in all habitats, from shallow waters to the deep sea. They can swim by flapping their shell, or they move by dragging themselves with their long tongue.

Clams are an essential food source for many animals, including humans. They also make pearls that are harvested for jewelry.

Sunfish are one of the most interesting animals that live in the ocean. They are huge, flat fish that can grow up to 10 feet wide and weigh up to 4,400 pounds!

Sunfish are also known for their strange behavior. They’re often seen swimming on their sides in the sun.

These giants are usually light gray or silver-gray in color. They might have a mottled pattern or darkened striped patterns to help camouflage.

The sea snail calls the ocean floor home. These creatures have a hard shell that protects their soft body from predators.

Sea snails use their foot to move along the bottom of the ocean or through the water column in search of food. They are scavengers and will eat just about anything they come across.

The sea snail is a crucial member of the ecosystem and contributes after it dies. Empty sea snail shells that wash ashore often become home to hermit crabs.

Eels are found in all the world’s oceans and can even be found in some freshwater lakes and rivers. They look a lot like a snake, but they’re all fish.

Eels are carnivorous, and their diet consists primarily of fish. They hang out around reefs and in rocky areas where they can hide and ambush prey.

Eels are excellent swimmers and can even swim backward! Moray eels back into their caves and crevices to sit and wait for prey.

Electric eels are known for their ability to generate electricity. They use this electricity to stun their prey so they can eat them.

The tuna is a large, migratory fish that spends most of its time in the open ocean. Tuna are fast and agile swimmers, reaching speeds of up to 50 mph.

Most tuna are streamlined predators that hunt in open water for smaller fishes and squid. They have giant mouths and sharp teeth.

They are also very popular as a food fish, with canned tuna being one of the most consumed seafood products in the world. Tuna fishing is a profitable industry in some parts of the world.

You might be surprised at how big tuna actually get. They can get up to 10 feet long and weigh over 2000 pounds! That’s bigger than a horse!