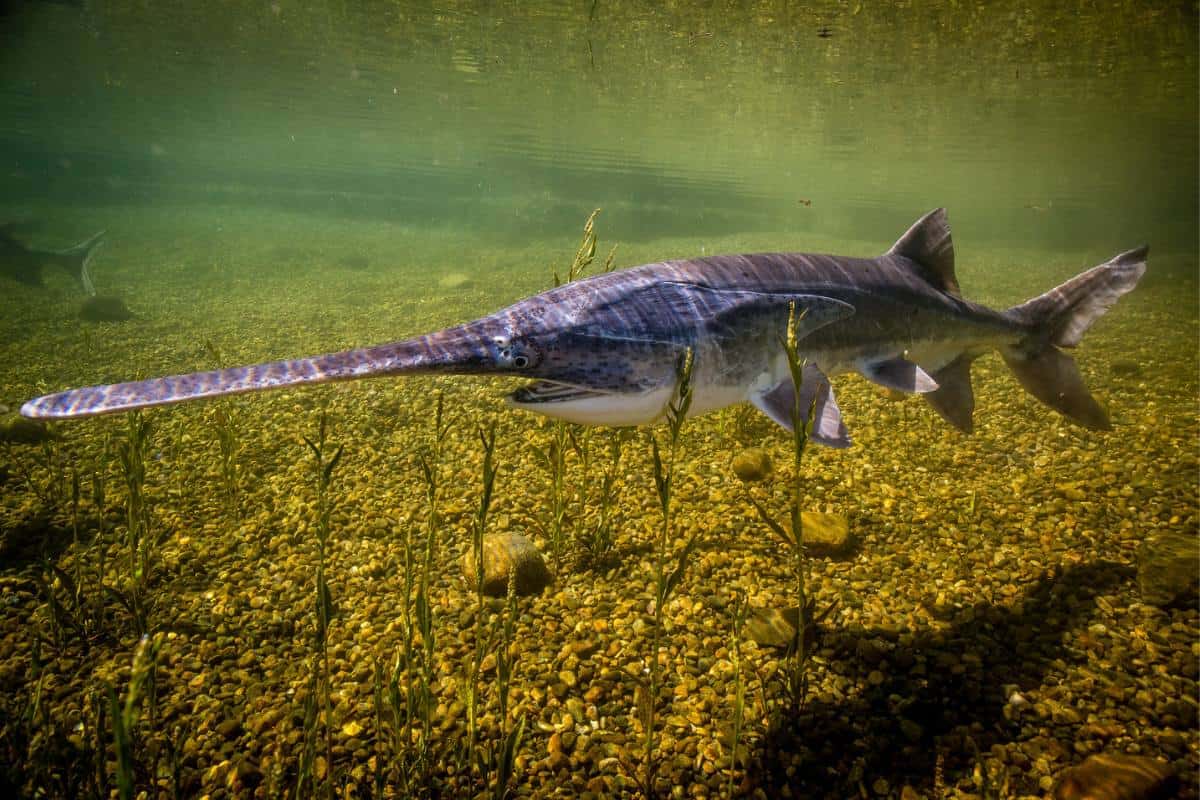 Millions of fish from various species will migrate every year. Some migrate to reproduce, while others migrate looking for food. No matter what the reason, many fish will swim thousands of miles throughout rivers and oceans during the process. Let’s take a look at 14 different species of migratory fish.

Migration is an important and vital part of the animal kingdom, especially for fish. During this time, the aquatic creatures will move from one area to the next. While food and breeding is the most common reason for fish migration, some species will also migrate to stay either warm in the winter or cool in the summer.

Salmon is arguably the most well-known migratory fish. The actual migratory pattern, however, will vary from one species of salmon to the next. For example, the North American Atlantic salmon will migrate from their birth rivers in the spring and move to the Labrador Sea.

The Mekong giant catfish is much larger than the catfish commonly found in the United States. These impressive creatures can reach lengths of over 9 feet and weight more than 700 pounds.

Even though they may appear scary, they are gentle giants that feed on invertebrates and algae. The Mekong giant catfish is, unfortunately, listed as critically endangered. Because their numbers have diminished, researchers rarely see them in the wild.

Skipjack tuna is another migratory fish that swims long distances in order to reproduce and find food. They typically love in open oceans, but can sometimes spend their lives in waters near the shore. While not yet listed as endangered, it is feared that the skipjack tuna could potentially slip into that category due to overfishing.

Swordfish migrate seasonally to cooler waters during the summer and then warmer waters in the winter. The exact migration pattern for swordfish varies from one species to the next. The North Atlantic swordfish, for example, migrates from the eastern seaboard in Canada and the United States to the eastern Atlantic in Europe and Africa.

Beluga sturgeons can weight over 3,000 pounds, and this large species of fish is actually one of the oldest. Research has shown that sturgeons were around 50 million years before birds!

The beluga sturgeon migrates to freshwater rivers from the sea, where they will spawn. These migrations happen twice a year, during the spring and fall. Unfortunately, this species is listed as critically endangered due to overfishing and loss of its natural habitat.

Despite their small size, the Hawaiian freshwater goby’s migration is a surprisingly long journey. As juveniles, these fish will travel from the sea to freshwater streams and stay there until they reach adulthood.

They use their sucker-like mouths and fins to make their way up slippery rocks until they reach a mountain stream. It is here where they will lay their eggs, which will then float down the stream and into the sea. Once the eggs reach the sea, they will hatch and the cycle will begin again.

Marlins may not be as high on the food chain as sharks, but they are not far behind. They have long, sharp bills and pointed fins.

These fish migrate seasonally from the Gulf of Mexico or the Middle Atlantic to southern Caribbean. Unfortunately, the number of marlins in the wild are starting to decline due to fisherman catching and killing them.

The American paddlefish is an unusual-looking creature with a long paddle-like snout. This freshwater fish is a filter feeder whose migration can expand over 2,000 miles.

Despite being a freshwater fish, these interesting creatures can swim through areas where saltwater mixes with freshwater, which is known as brackish water.

Pomfrets are teardrop-shaped fish and their size varies from one species to the next. The migration pattern of the pomfret depends on the temperature of the waters.

However, that isn’t the only thing that can affect its migration. The climatic conditions of the surface, as well as the density can directly affect when and where the fish migrates.

Sailfish are typically considered a near-shore species of fish, although they can dive over 300 feet deep. These stunning fish are related to the marlins, and have long spears that extend from their snouts.

It’s body has a deep blue hue with a silver underside, and a bright blue dorsal fin that has a spotted pattern. Sailfish migrate due to water temperature changes, and will head to warmer waters in the fall and cooler waters in the spring.

Wahoos follow the migration pattern of their prey, which are squid, mackerel, round herring, porcupine fish, and butterfish. The wahoo has a steel blue body and pale blue underside, and features a vertical bar-like pattern on its sides. An interesting fact about this pattern is that, after the fish dies, these bars will rapidly fade.

Steelhead trout are one of the top sport fish in North America. They are not overly large fish, and typically measure less than 45 inches long.

The migration of these fish is triggered when there are more hours during the day, which occurs in the spring. They migrate upstream to spawn, and some steelhead trouts will even migrate more than 500 miles until they reach their desired spawning location.

The body color of the shad can vary from one species to another, but they typically range from a greenish hue to a dark blue color. They are covered in scales that shade easily and have a forked tail fin.

Shads will begin their migration when the water temperatures start to decrease in later summer to early fall, and they will make their way to warmer waters.