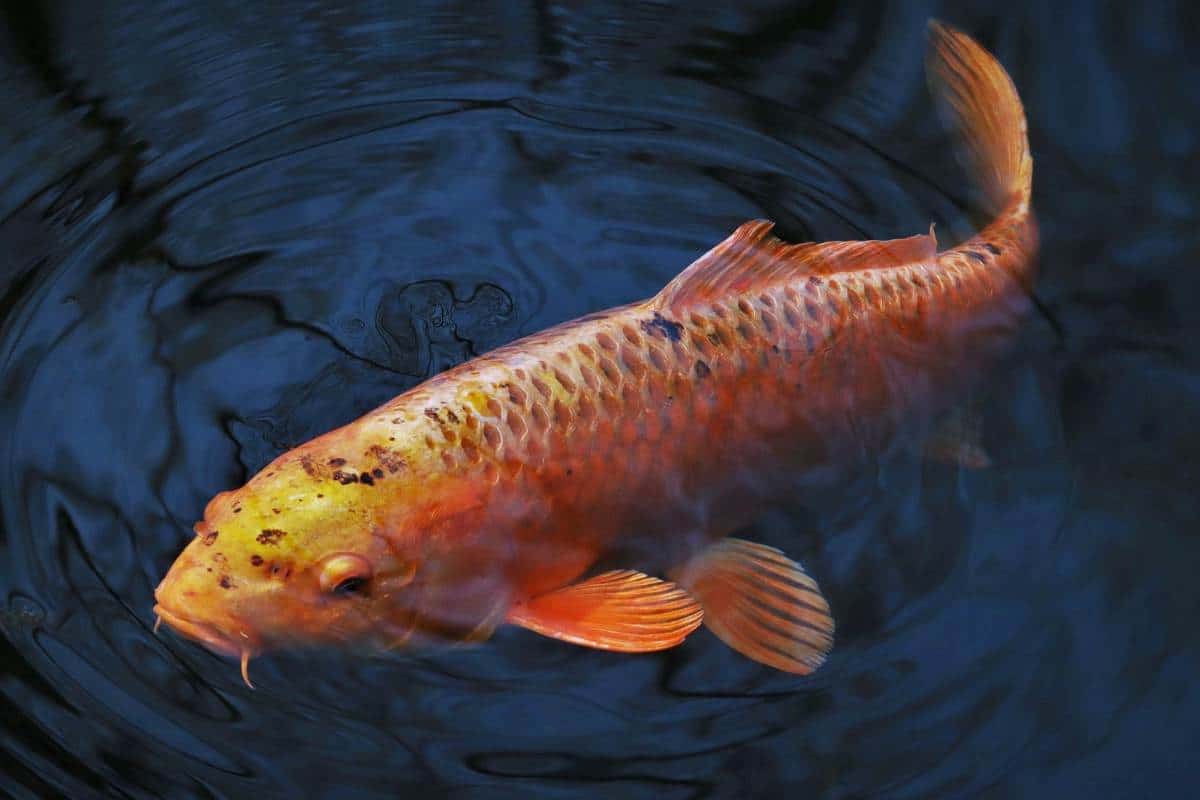 You won’t find all of the oldest animals in the world on land. Many of the creatures with the longest lifespans spend their time swimming deep beneath the sea. Like all other animals, not every fish has a long life expectancy. Many species only live for a few years! However there are some fish species that have shockingly long lifespans. In this article we’ll learn about some of the longest living fish in the world!

Are the world’s oldest fish in the ocean or in freshwater? Do deep water fish have longer lifespans than fish that swim near the surface? Read on to learn more about 12 fish species that can potentially live for up to 500 years!

These colorful, ornamental fish are a variety of the Amur carp. They were originally found in Central Europe and Asia, but they’ve spread to many other parts of the world. Koi carp are popular with breeders, and there are currently over 100 varieties created through breeding.

The average age of a koi carp can vary based on the part of the world it’s bred in. Carps bred outside of Japan have an average lifespan of around 15 years, while carps bred in Japan can live 40 years or more. The oldest koi carp on record, which was a fish named Hanako, reportedly lived for 226 years!

The spiny dogfish is a type of shark with venomous spines in front of its dorsal fins. Not only is it an aggressive hunter, but these fish are known to hunt in packs! Like many shark species, these fish grow slowly, and some females don’t reach full maturity until they’re over 30 years old.

Usually found in tropical waters, the reef manta ray is a cartilaginous fish. While these fish are smaller than giant manta rays, they can still grow to be 16 feet long. They’re most likely to be spotted in tropical habitats and are frequently seen in shallow waters near coastlines.

Experts still have a lot to learn about how manta rays grow and develop, but it’s clear that these fish can live for well over 40 years. The oldest known manta ray, a black morph ray named Taurus, is believed to be more than 50 years old. This long-living fish was first spotted back in 1982.

The school shark is a smaller shark species that can be found in ocean waters across the globe. Female sharks are slightly larger than males on average, with fully-grown females measuring from 59 to 77 inches and males measuring between 53 and 69 inches. It mostly feeds on other fish species, such as sardines and rockfish.

It can take more than 10 years for a school shark to reach maturity, but once these fish are fully grown, they generally have a long lifespan. Unfortunately, the school shark is heavily fished, and the species is currently listed as endangered in some parts of the world.

Sometimes called the river beluga, the kaluga is a type of predatory sturgeon. While these fish spend the majority of their time in freshwater, they’re also able to survive in salt water. The kaluga is one of the world’s largest freshwater fish species and can grow to be more than 18 feet long, with a weight of over 2,200 pounds.

Kalugas are overfished, which has left the species vulnerable to extinction. Although many kaluga are killed before they fully mature, these fish have the potential to live very long lives. One kaluga that was caught in China is estimated to be over 100 years old.

The great white shark is an apex predator that served as the inspiration for Jaws! Great whites are large fish, ranging from 11 to 16 feet in length and weighing between 1,500 and 2,400 pounds. It can be found in the Atlantic and Pacific Ocean and is often seen in coastal waters.

Male great whites usually don’t mature until age 26, while females may not reach full maturity until they’re in their thirties. While experts once believed that the great white had a much shorter lifespan, recent research has revealed that it can live to be more than 70 years old.

Also known as the great sturgeon, the beluga sturgeon is a large bony fish that can grow to be more than 20 feet long. It’s mostly found in the Caspian Sea, but it can also be seen in the Sea of Asov and the Black Sea. The beluga sturgeon can be traced back more than 200 million years and is one of the oldest fish species around today.

Belugas are fished for their roe, which is used to make beluga caviar. While this heavily shortens the life expectancy of many fish, the beluga sturgeon can live for more than 100 years if it’s able to survive in the wild. It’s possible that its primitive lineage plays a role in its unusually long lifespan.

The bigmouth buffalo is a freshwater fish with unusual eating habits. True to its name, it uses its large mouth and lips to suck up food that swims nearby. It can weigh as much as 80 pounds, and it can potentially grow to be 4 feet long.

While the bigmouth buffalo has many unusual qualities, one of the most notable things about this fish is its lifespan. It doesn’t reproduce very often, but it can live up to 127 years. Most animals, including humans, decline as they grow older, but the bigmouth buffalo gets stronger and healthier in old age.

It’s rare to see a sharptail mola in the wild. While the fish can be more than 11 feet long and weigh as much as 4,400 pounds, it spends most of its time swimming in deep sea waters. It looks very similar to the ocean sunfish, and it can be found in tropical and subtropical waters throughout the world.

Curiously, female sharptail molas live much longer than males do. The average lifespan for a male mola is 85 years, but females have an average lifespan of 105 years! Experts still have a lot to learn about the mola, but it’s possible that some fish can live for much longer.

The whale shark is known for both its size and its distinctive appearance. It can reach lengths of 18 to 33 feet long, and it can potentially weigh more than 40,000 pounds! The shark has a dark gray body and is covered in white spots.

There have been limited opportunities to study whale sharks, but researchers have used radiocarbon dating to determine the lifespan of these large fish. This research revealed that whale sharks can potentially live for more than 130 years. While whale sharks grow quickly when they’re young, their aging process slows as they grow older.

Sometimes called the blackthroat rockfish, the rougheye rockfish gets its name from the spines along its lower eyelid. While many rockfish are a bright shade of orange or pink, some fish are duller in color and are covered in brown or tan scales. These fish prefer to swim in deep waters, which makes them tough to spot.

It can be difficult to age deep water fish, but studies have shown that the rougheye rockfish has a potential life expectancy of 205 years. One rockfish caught off the Alaskan coast in 2013 was estimated to be more than 200 years old. Prior to that, the oldest recorded rockfish was aged at 175.

The Greenland shark is a deep water shark that’s usually found in the Arctic or North Atlantic Oceans. While it usually measures between 7.9 and 14.1 feet, the largest shark on record was a whopping 24 feet long! It’s an apex predator and is known to eat a variety of foods, including eels, smaller sharks, and even seals!

Not only is the Greenland shark the longest living fish species, but it has one of the longest lifespans of any creature in the animal kingdom. It’s considered to be the longest-lived vertebrae, and at least one female shark has a recorded lifespan of 400 years. Research shows that it could potentially live for 500 years or more.