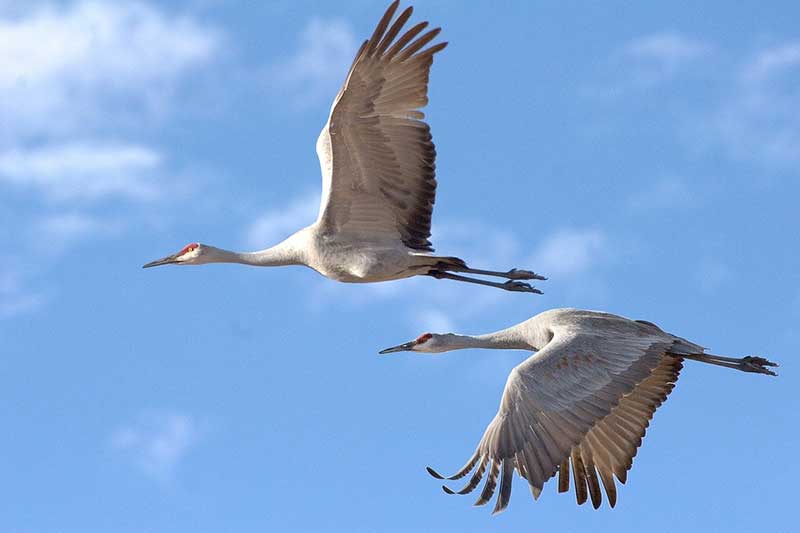 While some bird species live in the same location year round, there are many other birds that search for more suitable habitats during the colder months of the year. Birds that participate in these seasonal movements are known as migratory birds.

Some birds only travel a short distance, but other birds will fly thousands of miles to reach their preferred destination. Read on to learn more about birds that migrate and the areas they like to travel to.

During warmer weather, you can find the Hudsonian whimbrel in the subarctic regions of North America. Before winter arrives, this bird makes its way south, traveling to southern North America and South America.

When the Hudsonian whimbrel migrates, it becomes a coastal bird. During this time, it can frequently be seen wading in the water, where it feeds on small crabs and invertebrates.

The band-tailed pigeon can be found in many parts of North and South America, including British Columbia, Washington, California, Mexico, and Northern Argentina. While it typically migrates in the autumn, its migration pattern can vary based on its original location.

Pigeons in the Pacific Northwest usually travel to Southern California or Arizona before winter. Birds in the southwest will move even further south, traveling to Mexico or Central America.

This passerine bird is usually found in eastern North America, where it prefers forest habitats. To avoid the chilly weather, this bird begins a long journey south in the autumn, traveling all the way to tropical climates like Carribean islands and Central America.

It can take a long time for this bird to reach its destination, and it can be spotted in a variety of locations as it migrates. Since it’s an open nesting bird, it can sometimes be seen resting in gardens or parks before it resumes its flight.

Not only is the calliope hummingbird the smallest bird that’s native to the U.S., but it’s also smaller than any other long-distance migratory bird. It typically measures around three inches long and weighs approximately one-tenth of an ounce.

Despite its size, this bird makes a 5,000-mile round trip every year! It starts its journey in British Columbia and flies south towards the Pacific coast.

The whooping crane gets its name from its unusual cries, which sound a little like a trumpet! These birds spend the majority of their time in northern Canada. Many whooping cranes make their home in Wood Buffalo National Park in Alberta.

In November, the whooping crane travels to another protected area: the Aransas National Wildlife Refuge in Austwell, TX. The birds typically stay there until March, and then fly north to Canada for breeding season.

Some eastern bluebirds travel long distances, traveling more than 2,000 miles to stay warm during winter. Other birds don’t travel much at all, flying a short distance south or staying in their residential territory throughout the year.

You may also like:  7 Animals That Drink a Lot of Water (Pictures)

While this bird’s migration patterns can vary, it’s easy to spot in any location thanks to its bright blue feathers. These birds are highly social and can sometimes be seen in flocks that include more than 100 birds!

Sometimes called a marsh hawk, the northern harrier is a bird of prey that can be found in Canada and the northern United States. In the winter, it flies south, traveling to southern states, Mexico, and even Central America.

While it’s common to find these birds in marshes, Northern harriers tend to avoid bodies of water when they’re migrating. Instead, they fly over open fields, where they can easily find prey to feed on.

Since the hermit thrush is a short-distance migrant, it takes longer to fly south than many other birds. Typically, the hermit thrush migrates in late fall, but it may wait until the first signs of winter to travel to warmer temperatures.

The hermit thrush also heads back home before other birds do, flying north at the start of spring. It’s a nocturnal migrant, which makes it difficult to spot the bird as it heads towards its destination.

The snowy owl is a nomadic bird, and because of that, its migration patterns can be difficult to track. Some owls travel to southern Canada for the winter, while others travel to New England or the Great Lakes states.

Usually, the snowy owl sticks to cooler climates during the winter. Thanks to its bright white feathers, it can easily conceal itself from prey when snow falls. However, the snowy owl is occasionally spotted in southern states, including Texas and Florida.

Many birds travel long distances during migration, but there are very few land bird that venture further than the bar-tailed godwit. It flies all the way from Alaska to New Zealand in the fall. This journey covers more than 7,000 miles!

Since this bird has a long way to travel, it makes a few stops along its journey. When it flies south, it typically spends some time in Europe or Asia before continuing its trip to New Zealand. It also stops along the Yellow Sea when it travels north in the spring.

In the spring and summer, the prothonary warbler can usually be spotted in forests throughout the eastern United States. It has a preference for damp environments and usually spends the breeding season in southern states.

When the weather grows cooler, it begins its journey south, traveling to Central and South America. The mangrove forests that this birds travel to have been heavily deforested, which may put these songbirds at risk in the future.

Sometimes called the moonbird, the short-tailed shearwater is a seabird that regularly travels long distances in search of food. It’s also willing to journey far when it’s time to migrate. When winter draws near, it flies from islands near Alaska to the waters of Australia.

In total, this journey adds up to nearly 10,000 miles. The bird sometimes stops in California when it travels back north in the spring. It’s occasionally been spotted in other parts of the world, including a sighting in Ireland’s Tramore Bay.

Most arctic terns live in the Arctic Circle, though there are also small populations concentrated in the Northeastern United States. When these birds fly south, they journey to the other side of the world. They travel all the way to Antarctica, which is a flight of nearly 25,000 miles!

These birds follow an unusual route during migration and have been spotted in many parts of the world, including Europe and North America. Since these birds spend so much time migrating, they only nest every three years.

The mourning dove is one of the most common and widespread birds in the United States. It can be found in all 50 states, as well as parts of Canada. Since it resides in so many locations, its migration patterns aren’t always the same.

Some mourning doves fly thousands of miles south so that they can stay warm in the winter. Doves in southern states typically only fly a few hundred miles south, and some may not migrate at all.

These large cranes are social birds and live in pairs or larger family groups for most of the year. When it’s time to migrate, birds form much bigger groups so that they’re able to survive the journey south. These groups can be massive, and sometimes include hundreds of cranes.

Sandhill cranes can be found in several parts of North America and can even be spotted in Siberia. They can thrive in a range of habitats and typically travel to Florida, Mississippi, or Cuba during the winter. It’s common for sandhill cranes to make frequent stops during these long journeys.

The pectoral sandpiper is a shorebird that likes to forage for food along the water. Many sandpipers spend the breeding season in North America, but there are also large populations of this bird in Asia.

In the autumn, the pectoral sandpiper will usually venture to either South America or Australia depending on its original location. While the total length of this journey can vary, it’s not unusual for these birds to fly 10,000 miles or more! It’s an impressive journey, especially when you consider that the bird is making a round trip!

It’s hard to find a more colorful bird than the painted bunting! With its red, blue, and green plumage, this bird truly looks like the work of an artist. It’s usually found in the Southern United States, but it travels even further south before winter arrives.

Every year, the painted bunting molts, trading in its old feathers for new feathers with a more vibrant color. It starts migrating south before molting begins and stops in Mexico to shed most of its feathers. After molting, it resumes its journey and flies even further south!

This small passerine bird has been spotted wintering in many parts of the world. Bird populations travel to a variety of locations when temperatures start to cool, including India, Africa, and even parts of western Europe!

The pied wheatear usually migrates in smaller groups or pairs, which may be one of the reasons its final destinations vary. Some birds have been known to fly more than 11,000 miles when migrating! However, these birds regularly make stops during their journey, which means they don’t have to travel too far before taking a break.

When the purple finch migrates, it typically follows cone crops, which can make its migration patterns hard to track. Most birds journey from Canada to the central and southeastern United States during winter, but these birds may travel to other regions while searching for cone-producing trees.

These birds tend to make lots of stops during migration, and they often change their migration patterns from one year to the next. This can make them difficult to spot in some regions, but these birds will usually return to destinations they’ve visited before at one point or another.

The orchard oriole doesn’t wait long to start flying south. In fact, some birds have started migrating as early as late July. Typically, the bird migrates in large flocks, which makes it easier to spot during its journey.

When spring arrives, the Orchard Oriole flies north, but it isn’t in a hurry to get home again. It usually spends some time along the Gulf of Mexico. It eats a variety of foods but is especially drawn to flowers, which may be one of the reasons it starts to migrate right away.

This small passerine bird gets its name from the bright red patch of feathers that’s located along the top of its head. While its migration patterns can vary, it’s generally considered to be a short-distance migrant.

In fact, when some birds migrate, they don’t fly south at all. Instead, they venture from high mountains to lower elevations. Depending on the time of year, this bird can be found in Canada, Mexico, and in most of the United States.

It prefers to breed in northern regions, but enjoys warmer temperatures when winter draws near. When it does breed, it can lay up to 12 eggs at a time, which is more than any other North American bird of its size.