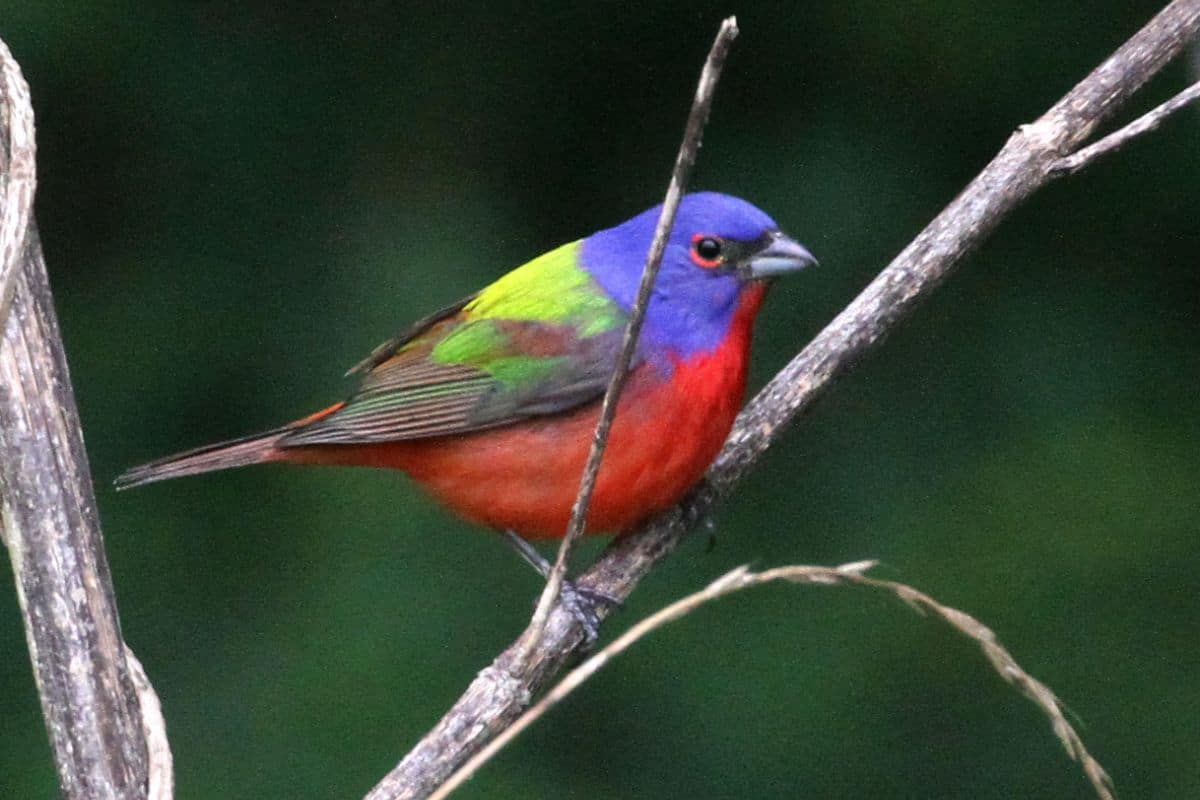 While both sexes are brightly colored, only males have the characteristic technicolor patches of scarlet, lime green, and blue. Females and immature males are a bright lime green.

2. You can find them in the southern United States, Mexico, Central America, and some Caribbean islands.

Two populations of Painted Buntings live in the United States during the spring and summer months. They are separated by several states and are dependent on different parts of the Caribbean.

Western species are those that live in the south-central United States, including Texas, Oklahoma, Arkansas, and Louisiana during the spring and summer. They migrate south through Mexico into Central America, where they spend their winters.

A small eastern population spends the breeding season on the coast of Georgia, South Carolina, and Florida. Some live further inland along the eastern state border of Georgia and South Carolina.

3. Painted Buntings prefer to live in dense thickets that conceal them from view.

This helps camouflage them from potential predators and as well as their insect prey. They also prefer fields with tall grass where they can flit in between stalks and forage for insects on the ground.

When males display for females, their songs can often be heard before they are seen. Despite their bright coloration, they are skillful hiders. Females are even better at blending in than males are because they have green feathers that camouflage easily into foliage.

4. Females do all the work raising the chicks.

The female Painted Bunting does most of the work raising the chicks. Since these songbirds have at least two broods per year, she does something to optimize the time she spends raising her young.

When her chicks are about to fledge, she may mate again and start a new nest. Her mate is left to feed the nearly-grown chicks and watch them leave the nest.

5. They prefer backyards with lots of vegetation.

Lots of low-growing vegetation allows them to stay hidden from view. Painted Buntings are songbirds that prefer to live along the margins of forests and fields.

They enjoy having areas of safety to which they can fly and hide. They also can find the seeds of grasses easily in these open areas where these plants grow most often.

6. Species in the east and west molt at different times.

Molting allows a bird to grow new feathers that replace old, broken, and damaged feathers. The eastern Painted Buntings molt before migrating south to Cuba, the Dominican Republic, and the eastern Caribbean islands. Their migration is shorter than the western group’s.

You may also like:  Can Flamingos Fly? (Interesting Facts and Pictures)

The western group molts halfway through their migration; they stop in Mexico where they molt and then continue their migration. This is very uncommon in songbirds; normally, only waterfowl molt in this intermediate resting ground.

7. They are often captured and illegally sold as pets.

For at least a century, people have captured and sold Painted Buntings as caged birds. This is still done in Central America and Mexico. Wildlife conservationists in southern Florida make continual efforts to curb this illegal trade.

8. One female can have up to four broods of chicks per year.

Painted Buntings are loosely monogamous. While males can have more than one mate, females generally only mate with one male. Throughout the breeding season, a successful pair might have up to four broods of chicks.

This is possible because the incubation and nestling periods are very short, just 11 and 9 days respectively. After one brood of chicks fledges, the female moves immediately to building another nest for her next brood.

9. Their name in French means “unrivalled.”

In France, birders call the Painted Bunting by another name: ‘passerin nonpareil.’ The second part of that name, nonpareil, means “unrivaled” in French. This is probably in reference to the bright colors of the male’s breeding plumage.

The male has a territory of about 3 acres which he defends from invasion by other males via all kinds of attacks. He is not above pecking and hitting other males with his wings. Sometimes, these attacks do mild or moderate damage.

11. Their favorite foods are seeds.

Throughout most of the year, Painted Buntings prefer to eat seeds. They forage for grass and seeds by hopping around on the ground. Their favorite types of seeds are usually those of grasses and weeds.

After the breeding season ends and before the birds migrate south, Painted Buntings are more interested in seeds than they are at any other time of year. They aim to build up energy reserves during this time so that they can fly over large distances.

12. Painted Buntings can live to be over 12 years old.

According to a scientific expedition in Florida, researchers captured a Painted Bunting that was over a decade old. This bird was likely part of the eastern population.