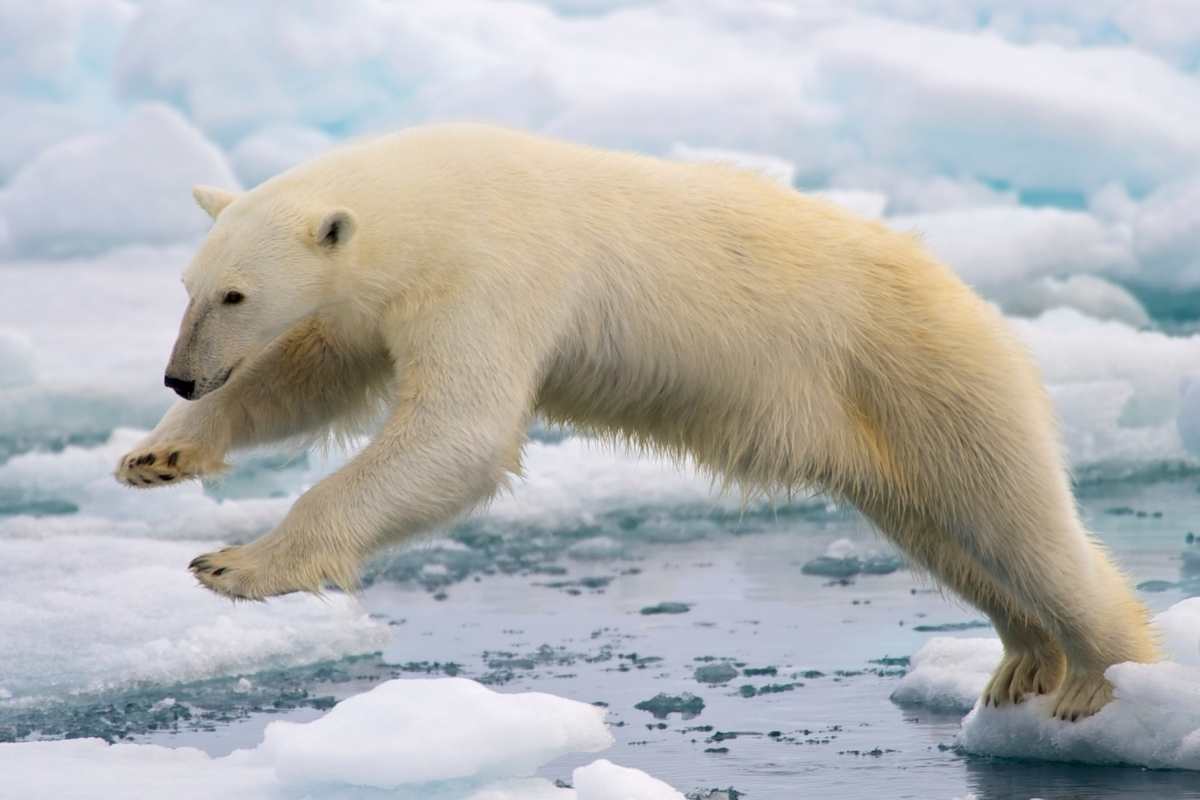 The Arctic is a geographic region that circles the northern most pole in the Northern Hemisphere. With over 5.5 million square miles, it encompasses parts of Canada, Russia, Scandinavia, and the United States (Alaska) and is surrounded by the frigid Arctic Ocean. In this article we will look at some of the animals that live in the Arctic and have adapted to make this region their home.

Animals that live in the arctic

The Arctic is one of the harshest climates on the planet. Daylight hours and temperatures have much more extreme fluctuations than most of us are used to at lower latitudes. Much of the arctic consists of ice or frozen tundra, making it hard for even plant life to get a foothold. Despite the harsh climate, many beautiful animals are able to adapt and are specialized to make the most of what the Arctic has to offer.

Here are 9 interesting animals that live in the Arctic.

Perhaps the animal most associated with the Arctic region is the polar bear. Known as the “King of the Arctic”, the polar bear is the largest of the bear species, weighing in at 770 to 1500 pounds. The average life span of a polar bear in the Arctic is 15-18 years. Though some do live 20-30 years.

Their thick white fur acts as camouflage. That, along with layers of blubber, helps to keep them warm. They have large, bumpy paws that help them walk on ice, swim, and catch their prey. Born on land, they spend most of their time on the Arctic ocean’s sea ice. From there, they can easily hunt their favorite food, the ring seal.

Male polar bears do not hibernate since they can access their food all year round. Females when pregnant will dig dens in late autumn and remain there until March.

Another resident of the icy Arctic is the Caribou, also known as the Reindeer. The average Caribou weighs between 240-700 pounds.

They have two layers of fur, a thick undercoat covered by longer, hollow hairs. This fur insulates the caribou, and also buoys them in the water while swimming. Species living in the far north tend to have whiter fur, while those further south are more brown.

These members of the deer family are herbivores and mainly eat lichen, moss, and low growing plants.

The Caribou has strong legs and broad hooves which help them to run from predators like the Grizzly and Arctic Wolf. Their large toes help them to stay steady on soggy ground and snow. In the winter, the hoof pads harden to allow them better traction on ice. The average Caribou will live for 15 years in the Arctic.

Of all the animals that live in the Arctic, the walrus is one of the most environmentally important. Considered a keystone species, this large marine mammal is considered a vital part of maintaining a balanced ecosystem.

Characterized by its prominent tusks and whiskers, the walrus averages 2,000 pounds. Much of this weight is blubber, a fat layer beneath their skin that keeps them warm and is burned for energy.

Their signature tusks are used in establishing social hierarchy, breaking holes in the ice for breathing and climbing out of the water, and aiding in digging out prey from the seabed.

Because they are so large, they have few natural enemies. Though Polar bears and whales do occasionally attack them. Walruses are social animals and live in large groups. Walrus calves will typically stay with their mothers for 5 years.

The Arctic hare is adapted for life on the Arctic tundra. They have short ears, legs, a thick snowy white coat, and 20 percent body fat. This makes it easy for them to stay warm and hide from predators. In some regions, they will shed their white coat for a brown or grey coat during the summer to better blend in with the landscape.

Being able to run up to 40 miles per hour helps them escape the Arctic fox and snowy owl who hunt them for food.

The Arctic hare is mostly solitary but will sometimes huddle in a group to share body heat. They are also known to dig holes and burrow to keep warm and hide. These hares are herbivores and eat woody plants, lichens, twigs, and roots. While not endangered, their lifespan is relatively short, 1 to 5 years.

The Ringed seal is the most common of all seal species found in the Arctic. Their name comes from the distinctive rings that surround the dark spots on their bodies. Weighing in at about 160 pounds, they are one of the smallest of the seal species. They can be found hanging near shore ice, chomping on their favorite meal of arctic cod, crab, or krill.

Their front flippers have claws that they can use to help them maneuver on the ice and to maintain breathing holes when swimming beneath the ice.

Excellent swimmers, the Ringed seal can dive into the frigid waters and stay under water for up to 45 minutes. Usually, this is to evade their main enemy, the polar bear. Other than mating, they are solitary animals that usually live about 40 years.

The moose is a member of the deer family. They are the largest member of the species, weighing between 880 and 1500 pounds. Unlike their deer relatives, they do not roam in herds. They are loners, with the exception of the calves who stay with mom until 18 months of age.

Moose are usually slow and non-aggressive but will charge if startled. Moose are often prey for tigers, wolves, bears, and wolverines. They often take snow-depth into consideration when selecting habitat. Deep snow slows them down too much, while no snow makes it easier for predators to chase them.

Nicknamed the “sea parrot”, these small birds have black and white feathers and a colorful bill. They live in colonies on sea cliffs and nest in rock crevices.

Short wings make them good swimmers, which allow them to catch their meals of herring and plankton. They are able to hold several fish in their beak at a time, allowing them to bring back plenty of food for their chicks. It also helps them escape their main predator, the seagull. 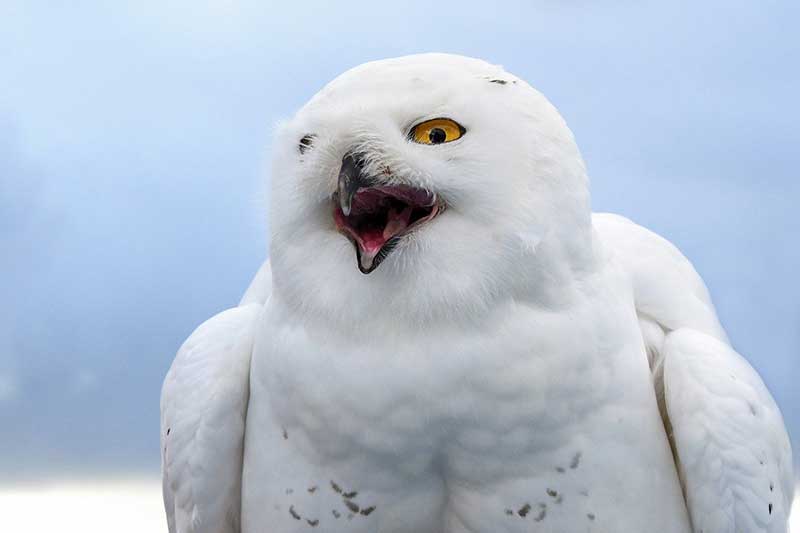 The snowy owl has many nicknames, including the polar owl, white owl and Arctic owl. Snowy owls are the only owls with white feathers. Males are mostly white, while females are white with heavy black barring.

While most owls sleep during the day, the snowy owl is up and stalking lemmings for dinner. Lemmings make up a large portion of their diet. Years with plentiful lemming populations often mean the snowy owls can have more offspring. Other small rodents, seabirds and ducks can also be part of their diet.

The snowy owls’ only predators are foxes and wolves, which mainly attack while the owl is nesting. Because the tundra is devoid of large trees, these owls nest on the ground, usually in a slightly elevated area.

Of all the animals that live in the Arctic, the lemming is one of the smallest. Only weighing 8 to 12 ounces, it is easy prey for the Arctic Fox. They are part of the Muriidea family, which includes mice, rats, and hamsters.

Lemmings are herbivores and feed on grass and moss. They will also use their flattened claws to dig through the snow for berries and roots. Though they do not hibernate, they live in tunnels under the snow. These tunnel systems can keep them safe from many predators, though foxes and owls can sometimes hear them under the snow and grab them.

Lemmings are an important food source for snowy owls, arctic foxes, and other meat eaters of the tundra.