An animal’s fur serves various purposes to help them survive in the wild. Most commonly, it helps them with insulation or camouflage. For example, animals with white fur usually live in colder habitats and use their coloring to blend in with the snow around them. Fur is essentially hair, except it is called fur when the animal has two layers of hair. Additionally, wool is a type of fur that is curly, soft, thin, and never stops growing.

If you’re wondering what types of animals have white fur and why, we’ve got answers for you. Read on to learn more about 10 white animals and where they are native to.

Let’s learn more about these 10 animals with white fur and how they use their fur for survival in the wild. 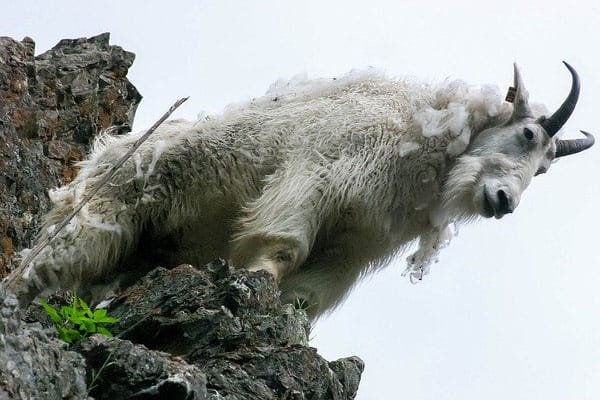 During the winter, mountain goats grow a vivid white and thick coat of fur that helps camouflage them in the snow. They also have distinctive beards for added protection against the cold mountain winds. When the weather warms up during the summer, they will shed their winter coat.

You can find mountain goats in high-altitude environments in Alaska and Canada, where the mountains help protect them from predators. They are one of the largest animals found at elevations above 13,000 feet. Generally, they can be seen migrating below the tree lines during the winter months.

Arctic lemmings live in the polar regions of Eurasia and North America. These stocky and short rodents transition from dark grey summer fur to all-white winter coats to help them camouflage in the snow. Their fur will also grow thicker and cover their paws. Additionally, they grow longer front claws to dig tunnels in the packed snow easier.

Yes, there are white tigers. They are a color variant of the Bengal or Siberian tiger where they have white fur with their black stripes, instead of the common orange-brown coloring. These tigers have been seen in the wild in India and rely on their fur mainly for warmth. White tigers living in colder climates tend to have longer and thicker coats.

The Siberian hamster, also known as the winter white dwarf hamster or Dzhungarian hamster, has soft, warm fur that helps them survive in cold habitats. They change their fur color from brownish to white during the winter months. This transition helps them camouflage with the snow on the ground to avoid predators.

These hamsters are native to Mongolia, Siberia, and Kazakstan. While their fur mostly changes color when in the wild, they are also popular pets worldwide. You may see your pet hamster change color if you keep them in a room receiving natural light so they can recognize the change in season.

Peary caribou are a subspecies of caribou that can only be found in the Canadian Arctic regions. They have denser coats compared to other caribou species, allowing them to survive the harsh cold conditions of their habitat. Their fur also changes from a dark, short coat during summer to a creamy-white during winter for added camouflage.

You may also like:  6 Types of Deer in North America (With Pictures)

Arctic foxes live in alpine tundra and arctic habitats in the northernmost regions of North America, Europe, and Asia. While they may be brownish-gray in the summer, they turn frosty white when winter rolls around. This allows them to camouflage with the snowy and icy surroundings.

Their white fur is also thick to help them maintain consistent body temperature in the cold. Other adaptations they have include compact bodies that minimize the surface area exposed to the cold and short ears and limbs to conserve heat.

White yaks are known to have wool, which is a type of fur but different in texture compared to other animals. These heavily built animals have extremely long and dense fur that hang down and extend beyond their belly. This helps them survive the harsh winters of the high altitudes where they live.

White yaks are native to the Himalayan region. Typically these animals are brown to blackish, making the all-white yaks quite rare. In Tibetan culture, the white yak is considered a divine and sacred animal that used to be used as a spiritual sacrifice in ancient times.

The short-tailed weasel has silky and dense white fur during the winter to keep them warm. However, in the summer, their fur is typically brown. You can find these animals throughout the northern parts of North America, including Montana, Wyoming, and Oregon. They are also known as the Alaskan ermine.

The Arctic hare is another animal that changes their fur color from grayish-brown during the summer to all-white during the winter. The coloring makes them blend in with the snow of their habitat. Additionally, their fur will grow thicker and longer in the winter for added insulation.

They are the largest hare species in North America, growing between 17 to 28 inches long and weighing 6 to 12 pounds. You can find them in the North American tundra environments, such as the Arctic. Interestingly enough, despite the harsh conditions of their habitats, these hares don’t hibernate.

Harp seals get their name from the curved dark patch on their back that looks like a harp. While adults have light gray fur, the pups are born with completely white fur. The white color helps them stay warm while they develop blubber by absorbing the sunlight. They’ll shed their white fur after 3 to 4 weeks.

These seals live in the cold waters of the Arctic Circle and North Atlantic. The pups are born on ice surfaces and nursed by their mothers for less than 2 weeks.

For me, polar bears are one of the first ones I think of when it comes to animals with white fur. However, did you know that polar bears aren’t even really white? Their hairs are actually transparent and their skin is black! They say that the reason polar bears appear white has something to do with the UV reflection off of the snow. Regardless, I added polar bears to the list anyway.

You may also like:  19 Examples of Herbivores (With Pictures)

Polar bears are the largest species of bear in North America, and also the largest terrestrial carnivore in the world. These large predators have the strongest bite among bears. They typically hunt for seals and will wait by a seal breathing hole in silence for the seal to come out. Sometimes when food is scarce, polar bears will also eat fish, berries, or whale carcasses.