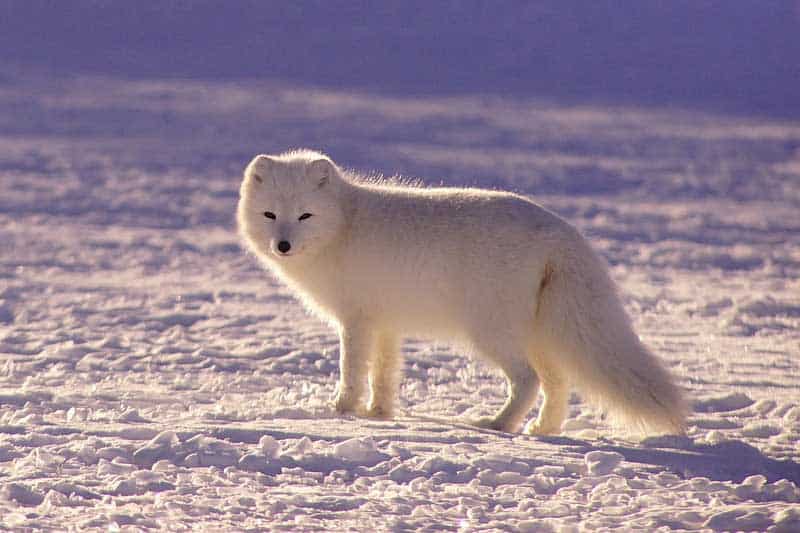 Arctic foxes are a beautiful and interesting animal and the second most asked for animal in the arctic tundra’s to be photographed. These cheeky little foxes are great for several reasons, but let us look at 10 facts that you may not have known about the arctic fox.

The Arctic fox is one of the most beautiful animals in our world, with its fluffy white coat and petite ears. In addition, these small creatures are incredibly resourceful at making sure they can live in the harsh temperatures of their arctic homes.

The Arctic fox has no real home range and travels over long distances. There was a young female fox researchers placed a tracker on her, and she went the distance of twenty-nine miles a day to ninety-six miles a day. They often hunt together in small packs and can be seen playing with one another by tourists and researchers.

2 – They have lower body temperatures compared to other mammals

The Arctic fox has an exceptionally low body temperature compared to other mammals. They have the best pelt in the tundra, which helps them endure temperatures down to -94 °F (-70 °C).

In the summer months, when it’s warmer, they will shed their thicker winter coats, but in colder times of year when there is still snow on the ground or during blizzards, you can always find a white fox searching for food!

The arctic fox has many adaptations that help them stay warm during the winter, but they also have some unique facts about their color and how it can change with the seasons too! This includes changing colors from brown in summer months, all the way through white for winter.

White foxes can be found inland where they can blend with the snow better, while they find mostly darker Arctic foxes on the coast where their coat blends with the cliffs and rocks.

Arctic foxes mate for life much like some other species such as geese. Arctic foxes are fertile mostly when there is an abundance of food. If there is a lack of food or competition, there’s a less likely chance they’ll reproduce.

Most foxes have about 5-6 kits a year, where those that are well fed and not in dire conditions can have up to twenty-five kits in a year.

5 – Their favorite food is lemmings

They hunt by digging in the snow to find lemmings, which are a type of rodent located underneath the surface. When it’s dark, they use their whiskers to navigate through any tunnels looking for food. They’re opportunistic feeders and will eat anything from insects to small rodents.

They don’t really have any predators other than humans and polar bears. The primary threat to them is the changing climate. As snow cover reduces, their food supply decreases and at crucial times of year they may not build enough fat reserves for hibernation, meaning that both adults and kits can starve or freeze during winter months.

You may also like:  8 Unique and Interesting Venomous Mammals

These cheeky little creatures are very resilient and can survive through most conditions. If food is scarce, they will dig up lemmings from under the snow or catch birds on land, as well as eat berries, plants, and eggs.

If a young fox is in danger, they will roll over and play dead to prevent any harm. The most dangerous threat for an arctic fox would be a polar bear, but if caught by surprise, they may have to use this defense mechanism immediately when being attacked. Their natural predators beside the polar bear are wolves, golden eagles, grizzly bears, and humans.

9 – They sometimes hunt in packs

Arctic foxes are expert hunters and will often hunt in packs when they can. They are highly intelligent creatures with their keen sense of smell, sharp hearing, and sight, along with fur that allows them to withstand harsh weather.

They’re also known for being playful animals. If they aren’t hibernating during the winter months or hunting in packs, then they may be seen playing with other foxes or even chasing each other around.

The arctic fox has furry soles on its feet to help them walk across the snow that would normally be impossible for other animals! They also have a very thick and warm coat of fur to help them live in such harsh conditions. In the winter, to keep themselves warmer, they will often increase their body fat, sometimes as high as 50% of their normal weight.