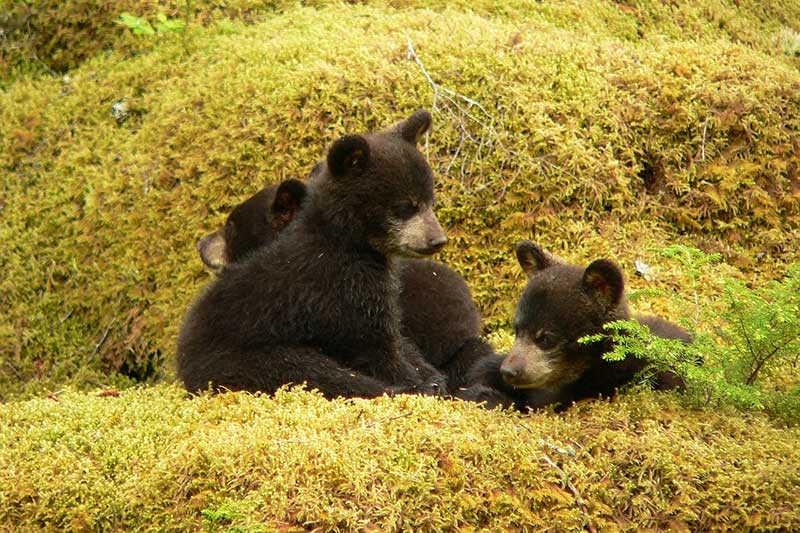 There are 8 species of bears in the world, with even more subspecies. The Brown bear alone has over 90 different subspecies. They differ wildly in the climate they prefer, their appearance, and their diets. From the immense Polar bear to the petite Sunbear bear bears show a variety of behaviors and appearances. One thing they all have in common is that they are endlessly fascinating, and have a reputation for being good mothers. What exactly do these “mama bears” have to put up with from their offspring? Keep reading for some cool facts about bear cubs.

1. Most bears are born as multiples

Bears have anywhere from 1-5 cubs at a time, with 2 being the most common number. Most bears are capable of raising 2 cubs, with the exception of the Giant Panda. The Giant panda will often discard the weaker cub in favor of the stronger one, this is more common when the mother has a decreased milk supply or is a first-time mom.

The actual gestation length for bears is difficult to calculate. Bears can experience something called “embryonic diapause” or delayed implantation. This means that an egg is fertilized, and begins to develop into a blastocyst. The blastocyst will stop development until it implants in the uterine wall. It may be waiting for the bear to gain an appropriate amount of weight for gestation, or for an environmental factor to be just right. For this reason, a bear may technically be pregnant for 140 days but only actually gestate for 60.

Bears have extremely small babies relative to their adult size. With polar bears having babies that measure only 12 inches long and reaching adult heights of around 9 feet, and Panda cubs as the smallest in comparison to their adult size at 100g and the size of a stick of butter. Their babies are born hairless and helpless and require constant care for the first several weeks of life. Mother bears will begin to leave the cubs alone in the den while she forges or hunts when the cubs are developed enough to maintain their body temperatures without constant contact.

Polar bears are classified as marine mammals. Since they need a great deal of body fat to survive in arctic conditions, their milk must have a high-fat content to give the cubs a good insulating layer. Polar bear milk is 33% fat with Brown and Black bears coming in second with milk of around 20-25% fat.

Grizzly bears cubs start eating solid foods at a few months old, but they will continue nursing for as long as 3 years. The mother bear will decide when she wants her cubs to stop nursing. This is usually when she is ready to mate again.

6. Bears use trees as babysitters for their cubs

On their early outings, the first stop for a mother bear and her cubs is a sturdy tree. This gives the cubs a place to climb in case of danger, while their mother looks for food within a several mile range. The cubs will alert if they are in danger which will bring their mothers running to their rescue.

7. Sloth bear cubs ride on their mothers back

Sloth bears are a very unique member of the bear family. One of these uniques traits is the way the mother bear transports her cubs on her back. They are the only bear species to do this. This is not their only sloth-like trait, they ae also primarily arboreal.

8. Cubs in cold climates are born while their mother is hibernating

Cubs who are born during hibernation spend the most vulnerable part of their life in the safety of their mother’s den. When they finally emerge in spring, the cubs weigh around 6lbs and many can already climb a tree.

9. Polar bear cubs stay in their den for around 60 days

Polar bear cubs are vulnerable for the first few months of their lives. They are easy prey for predators like arctic foxes. Staying in their dens keeps them warm, and protects them from predators. When they leave they will be about 15lbs and more difficult prey for other arctic hunters.