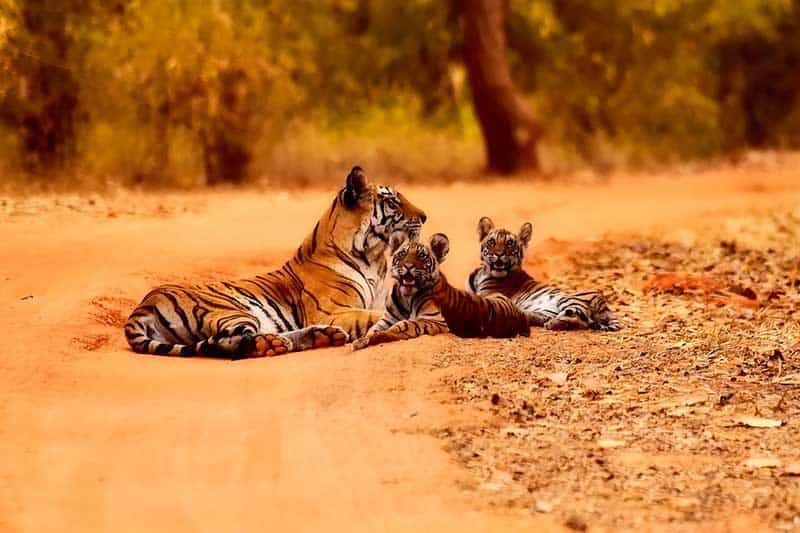 Looking at tiger cubs tumbling around it’s hard to imagine them being the biggest cats in the world. The adorable antics they perform are all a part of their growth into an efficient predator.

Tigers are keystone species, and their continued survival is necessary to maintain the balance of the eco-system in their native habitats. Unfortunately, they are threatened due to poachers, and the encroachment of humans into their territories.

The more we know about these solitary animals, the better we can find ways to protect them. What happens to these cats as they go from cute cub to mighty hunter? Keep reading to find out some interesting facts about baby tigers, or tiger cubs.

Tigers can have litters of as many as 7 cubs. Unfortunately, not all of them will survive. Typically only 2 cubs from a litter will survive into adulthood. This can be due to disease, food scarcity, other predators, or adult males.

2. Tiger cubs can’t hunt on their own until they are over a year old

Tiger cubs begin eating meat at anywhere from 6 to 8 weeks old, depending on the species. They will not be competent hunters until they reach around a year and a half old and will rely on their mothers kills.

3. Tiger cubs go through an awkward phase before adulthood

Tiger cubs go through a transient phase before they become true adults. They are chased away by their mothers when she has a new litter when they are around 2 and a half years old.

Only around 7 tigers will survive this stage. They are unfamiliar with how to avoid humans and are not used to living on their own.

The risks for them at this point in their lives are higher than at any point except immediately after birth. It will take another year for females, and as long as two years for males to reach full maturity.

Tiger cubs are born with a membrane covering their eyes. This membrane will cover their eyes for around 5 days until it eventually breaks open.

5. There is always a dominant cub

Every litter has one cub that is dominant and leads the others in play and is favored by the mother. This cub is not always the largest male. There are also dominant female cubs.

6. Female cubs have a higher survival rate than males

Male cubs are more adventurous and likely to roam further than females. This may partially explain why female cubs have a better chance of surviving unto adulthood. Many tiger cubs are killed when they first begin hunting, due to being injured while trying to take down prey.

7. Female cubs stay close to mom after they are grown

Although they may never interact, after leaving to establish their own territories female tigers will often find one that is close to or intersects with their mothers. Male cubs will roam further afield in search of territories, often being allowed to stay as a guest on the far edge of another males territory.

8. Cubs learn to hunt by imitation

When they first learn to hunt, they will watch as their mother stalks and takes down prey. Much of their play emulates stalking and hunting behaviors.

As they get older she will get the prey to the ground then allow the cubs to step in for the kill. After this, the cubs will start to practice their hunting skills on their own.

9. Tigers are born with blue eyes

Like humans with brown eyes, tiger cubs are born with milky blue eyes. As they develop their eyes will slowly change to their signature gold color.

The only tigers that maintain their blue eyes are white tigers. White tigers are not albino or a separate species but are white due to a genetic mutation which also causes blue eyes.

10. White tiger cubs are extremely rare in the wild

White tiger cubs account for 1 in every 10,000 cubs born in the wild. Due to their unique coloring, which makes them more visible, their chances of surviving into adulthood are lower than the typical 50% of cubs of the typical coloration.

The last known wild white tiger was killed by a trophy hunter in 1958. White tiger cubs born in captivity are typically inbred and have a variety of congenital conditions.

They are also usually cross-eyed. The gene that causes their coloring also causes the optic nerve to cross.