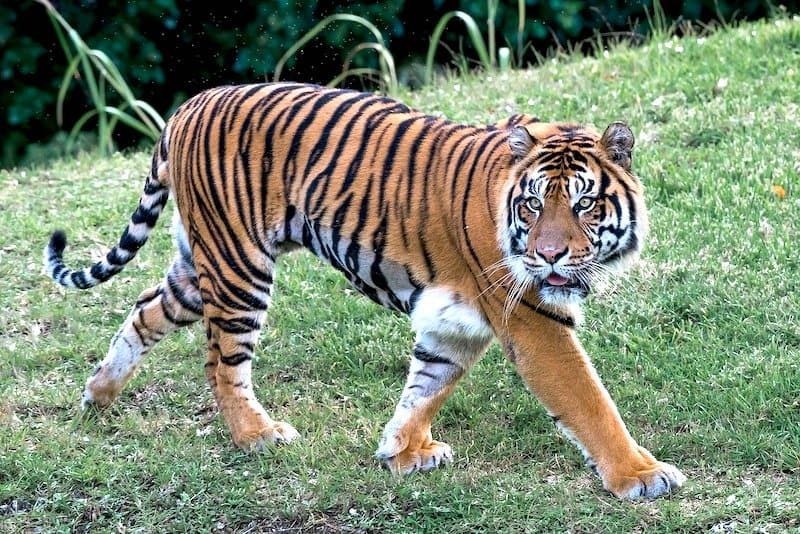 There are only a handful of predators that can rival the might of a tiger. These massive cats are some of the most feared animals in the world, and with good reason. Tigers are incredibly strong, fast, and agile, making them a force to be reckoned with.

In fact, a single tiger can take down prey twice its own size. So, just how strong are tigers? Let’s take a closer look at how these formidable apex predators compare to other animals in terms of strength and learn more about what makes these big cats so powerful.

How Strong Are Tigers?

Tigers are some of the largest cats in the world, with males weighing up to 660 pounds and females up to 370 pounds of pure muscle mass. In fact, scientists have discovered that a tiger’s body only has around 7.7% of body fat.

These large cats weigh as much as six average men. Being apex predators, tigers are at the top of the food chain. They have no natural predators except humans. The strongest and largest species is the Siberian tiger, which grows up to 12 feet long from its nose to the tip of its tail.

How Strong Are a Tiger’s Legs?

A tiger’s legs are incredibly strong, capable of supporting the animal’s muscular and massive body. Because of their dense and sturdy bones, their legs can help them reach speeds of up to 40 miles per hour. The muscles in a tiger’s legs are also well-adapted for leaping, helping the animal to jump up to 16 feet high in a single bound.

Tigers use their powerful legs to carry out a variety of tasks, including hunting, climbing trees, and swimming. In fact, tigers can swim across a river with strong tides up to 2.5 mph for 4.3 miles at a time.

They often rely on their hind limbs for support by digging into a tree when climbing vertically. Additionally, their hind limbs catapult them forward when they want to run or pounce on prey.

How Strong Is a Tiger’s Bite?

A tiger’s bite force is incredibly strong – about six times stronger than a human’s. In fact, a tiger’s canine teeth can be up to four inches long! Their teeth are specially adapted for slicing through flesh and crushing bone.

Tigers use their powerful jaws and sharp teeth to take down large prey, such as deer, wild boar, and even rhinos. Their bite force is so strong that they can decapitate their prey with a single bite.

On average, these big cats can generate 1,050 PSI of bite force, which is six times that of a human’s (around 162 PSI). So, if a human was on the receiving end of a tiger’s bite, it would be quite painful and could cause serious damage.

Interestingly, tigers are not the only animals with powerful bites. Other large carnivores, such as lions and bears, also have strong bite forces. Lions have been recorded to have bite forces up to 1,200 PSI, slightly more powerful than tigers.

How Strong Is a Tiger’s Swipe?

Tigers have incredibly strong swipes and can generate up to 10,000 lbs of force with a single paw swipe. That’s enough force to crush bone and kill prey instantly. With their paws estimated to grow up to 8 x 8 inches or (20 x 20 cm), these stealth hunters use their powerful swipes to take down even large animals, such as wild boars.

And with their sharp claws, it’s easy to see why a tiger’s swipe is one of their deadliest weapons when hunting. Studies show that a single blow from the paw is strong enough to break another animal’s spine or even kill them.

What Makes Tigers So Strong?

There are several factors that contribute to a tiger’s strength. For one, they have very large and powerful muscles. Additionally, their bones are thick and dense, which helps support their muscular body. Furthermore, tigers have a variety of adaptations that help them become successful predators.

For example, their retractable claws help them grip and hold onto prey. Additionally, their sharp teeth are designed for tearing flesh and cutting through bone.

While they may not be the biggest or the most powerful animal out there, all these factors work together to make tigers some of the strongest animals on the planet.

A Tiger’s Strength Compared to Human

How does a tiger’s strength compare to that of a human? In terms of sheer muscular strength, tigers are far stronger than humans. They have powerful legs that allow them to run at speeds of up to 40 miles per hour, and their front paws are equipped with sharp claws that can tear through flesh and bone.

In addition, tigers have incredibly powerful jaws that can crush bones. Humans, on the other hand, are relatively weak in comparison. We are not built for speed or strength, and our nails and teeth are no match for a tiger’s.

Of course, humans have other advantages that tigers don’t. We are intelligent creatures who can use our brains to outwit our opponents. We also have access to weapons that give us an extra edge in a fight. But in a head-to-head matchup, there’s no doubt that a tiger would come out on top.

How Does the Tiger’s Strength Compare to Other Big Cats?

Tigers are the largest of the big cats and among the strongest animals in the world. Their muscular bodies and powerful limbs enable them to take down prey much larger than themselves. On average, tigers weigh between 600 and 650 pounds and can reach lengths of over 11 feet.

Their sharp claws and long teeth make them fearsome predators, and their strength is unmatched in the animal kingdom. In comparison, lions weigh between 330 and 550 pounds, and leopards weigh between 60 and 200 pounds. Tigers also have much stronger jaws than other big cats, which allows them to crush bones with ease.

You may also like:  15 Interesting Facts About Snow Leopards