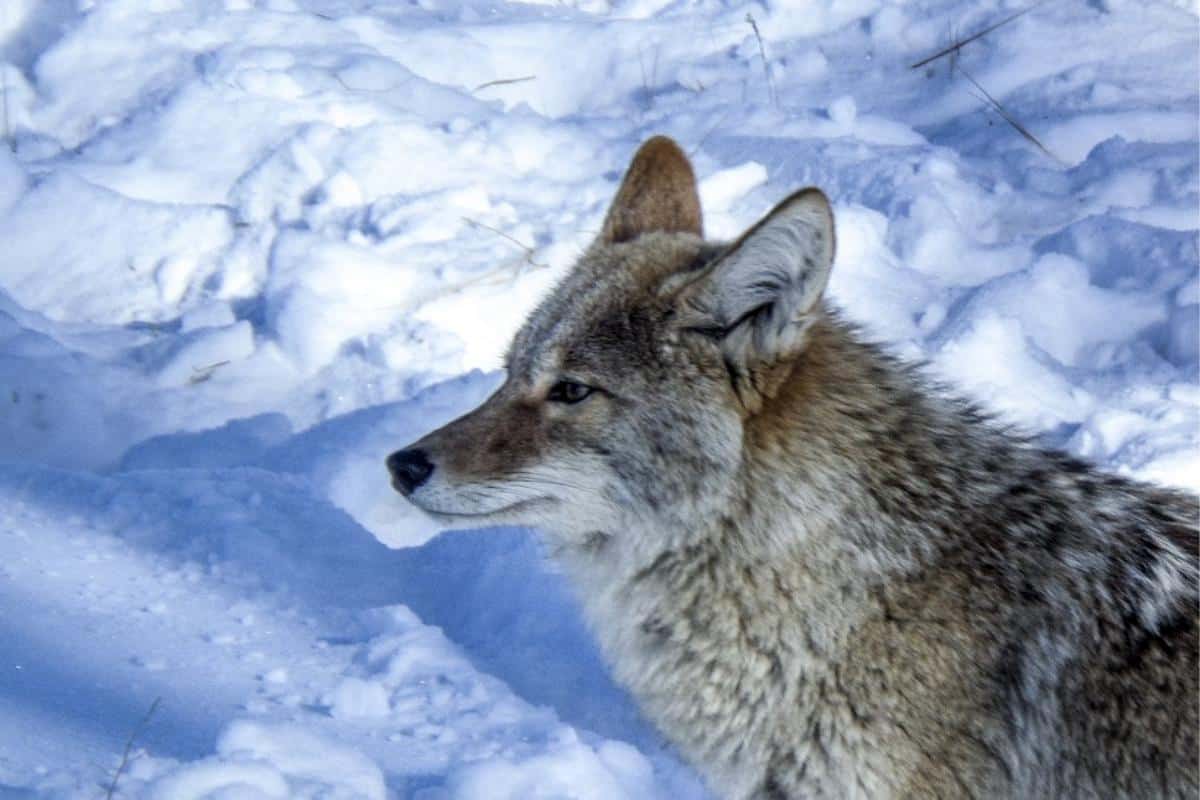 Coyotes live in various habitats across North America, including forests, deserts, mountains, plains, and grasslands. You also don’t have to go out hiking or camping to encounter one. Urban coyotes are increasing over the years, with more individuals venturing into cities and suburbs to search for food. Seeing any wild animal in your backyard can be startling. But are coyotes dangerous? How many fatal human attacks are they? And what do you do when you come across a coyote?

Find out answers to these questions and more about coyotes and whether you should be afraid of them.

Yes, they can be dangerous. Coyotes are bold predators and opportunistic feeders. Despite their small size of around 20 to 50 pounds, they can hunt with deadly precision by going directly for the killing bite at their prey’s neck to compress the windpipe.

They can also stalk their prey stealthily and give chase at speeds of 40 mph. However, they typically hunt small mammals, such as mice, rabbits, and voles.

When it comes to humans, coyote attacks are rarely fatal. There have been 2 major recorded cases of people dying from a coyote attack, one in the 1980s and another in 2009. Coyotes are especially dangerous to young children or small pets, and they can cause serious injuries to adults.

Will a coyote attack a human?

Coyotes may attack humans, but it’s a rare occurrence. A study on coyote attacks on humans in the U.S. and Canada documented just 367 total attacks between 1977 and 2015. Around 60% of victims were adults and 165 of the attacks occurred in California.

Between December 2020 and August 2021, there was also an unusual increase in coyote attacks at a Vancouver park, with 40 reported bites. However, none of the attacks were fatal.

Coyotes can generally be shy around humans and try their best to avoid interactions. However, there are instances where coyotes can become bold and aggressive if they are comfortable around humans.

Most human attacks occur by a coyote that was being fed by someone. Coyotes can also act aggressively towards animals, like family pets, who appear to be territorial competition. Another common reason humans get injured by coyotes is pet-involved, such as trying to rescue their small dog from a coyote attack.

What happens if a coyote attacks you?

If a coyote attacks you, don’t play victim or dead since it won’t likely deter them, especially if they are attracted to any food you are carrying. Try to make yourself as big as possible and create loud noises to startle and scare them away. It’s also best to have a stick with you that you can throw at or use to fend off the attacking coyote.

Most coyote attacks aren’t fatal. However, they do have the ability to cause serious damage to organs, especially when attacks involve small children that the coyote can stalk and overpower. For example, one incident involved a 3-year-old boy who suffered abrasions and puncture wounds to the back, shoulders, and head.

Do coyotes chase you?

Yes, coyotes can chase you, so you should never run away when you see a coyote. This can trigger their predatory response for them to give chase, and they are much faster than humans. Instead, you want to back away slowly while maintaining eye contact with the coyote.

It’s best to be aware of the situation and watch if the coyote is lingering or approaching you. Make sure you don’t have any food they are attracted to and scare them away with loud noises.

However, if they are just minding their own business, it’s best to avoid creating conflict. Sometimes when you encounter a coyote in the wild, they are just shadowing you to make sure you don’t come across their den.

Can you get rabies from a coyote?

Yes, you can. A coyote’s scratch or bite becomes more dangerous if the coyote has rabies. They are one of the primary carriers of rabies in North America. Rabies infections will cause the coyote to act unnaturally fearless and aggressive. Coyotes also host fleas, ticks, and other parasites that can spread diseases.

Symptoms of contracting rabies include headaches, fever, muscle spasms, salivation, paralysis, and mental confusion. It is a fatal viral disease, especially once symptoms develop. However, it is preventable by the rabies vaccine. You can also take a fast-acting shot on the day of rabies exposure, so seek medical attention immediately.

How do you protect against coyotes?

You can adopt various prevention methods to reduce the risk of coyote attacks, especially on your property. Make sure not to leave your pets out alone for long periods, especially at dusk, dawn, or night. You can put up coyote fencing around your property.

Also, be conscious about not leaving out food that can lure them into your yard. Coyotes can be attracted to garbage or pet food as well as show up to hunt the small mammals like squirrels eating out of your bird feeder.

Whatever you do, don’t feed the coyotes directly. This can make them become habituated. When they become used to humans, their fear and natural instinct to shy away will reduce, and the chances of a dangerous encounter can increase. It also encourages them to hang around your property since they know there’s food available.

How do you scare off coyotes?

Typically coyotes will try to avoid you and run away when they see humans. However, if a coyote doesn’t act fearful and starts to approach you, try to scare them away by harassing them with:

If you encounter an aggressive coyote that isn’t afraid and bites humans or attacks pets, especially without provoking, you must report the incident to the appropriate authorities. The coyote will have to be targeted, tested for rabies, and possibly removed from the population to prevent additional attacks in the area.

What time of day do coyotes come out?

Generally, coyotes are crepuscular, where they are most active at dusk or dawn. However, they can also come out during any time of the day or night. They are opportunistic feeders that will go searching for food whenever the opportunity arises. Naturally, they are alert during the daytime. However, urban coyotes have adapted to be more active at night when there is less human activity, traffic, and predators.

You may also like:  Why Are There so Many Flies Outside My House?

Coyote attacks most commonly occur during the breeding and pup-rearing season, from March through August. These months are when they are most active and require more food sources, so the chances of human-coyote encounters increase.

Coyotes are bold predators that can outrun you easily if they start to chase you. While fatal coyote attacks are very rare, this doesn’t mean they aren’t dangerous and you shouldn’t be careful when encountering one.

Coyote attacks are much riskier for children or pets and when the animal is carrying rabies. Luckily you can prevent attacks by reacting appropriately and taking preventative measures not to attract coyotes to your backyard or campsite.