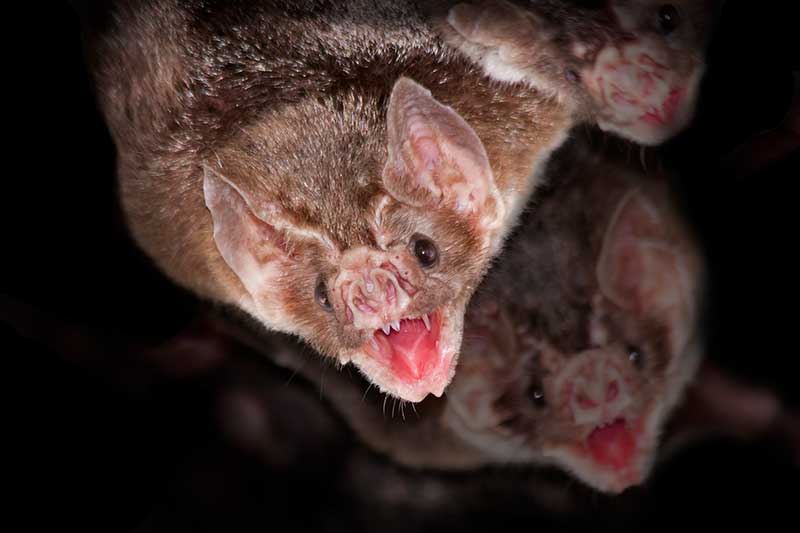 Bats have been around for up to 100 million years and are fascinating animals in many ways. Some are solitary, while others prefer roosting in small groups or large colonies. They are the only flying mammal and over 1,300 species live around the world. Out of these species, 47 are in the U.S., and there are over 30 species of bats in Texas.

Texas has over 3,000 caves that offer great habitats for bats to roost in. Bracken Cave in the state also has the largest known bat colony worldwide. While bats can be interesting animals, you have to watch out since some of them carry rabies!

This article will cover 16 species of bats in Texas, where they live, and interesting facts about them.

The Mexican long-nosed bat has an elongated muzzle and a very long tongue of up to 3 inches so that they can reach the nectar in plants and large cacti. They are between 2.75 and 3.5 inches long and typically sooty brown or dark gray.

You can find these bats only in the far western counties in Texas, mostly roosting in caves and finding food in the desert. The Texas Parks and Wildlife list them as endangered in the state.

The Ghost-faced Bat has a unique facial feature where they have folds of skin across the chin, reaching from ear to ear. These bats have wingspans of 14 to 15 inches and are reddish-brown to dark-brown.

You can find them living in lowland areas of southern Texas, especially near desert scrubs. They mainly roost in caves and abandoned mines or sometimes in old buildings.

The big free-tailed bat is either pale, dark brown, blackish, or reddish-brown. As its name suggests, it’s quite large, with a wingspan between 16.4 to 17.2 inches.

They can be found in southwestern U.S. states, including throughout Texas. These bats have been documented to live at elevations 8,500 feet above sea level and can fly over 25 miles per hour.

The cave myotis are brown to black and have a hairless area between their shoulder blades. They also have small pointed ears, similar to that of a Chihuahua dog, and are known for their erratic flight patterns. These bats have forearms 1.5 to 1.7 inches long and males are typically smaller than females.

You can find them in caves throughout Texas, except for the far eastern and northern counties. They prefer lower elevations in areas with cactus, palo verde, creosote bush, and brittlebush.

The hoary bat grows around 5.1 to 5.7 inches long and has a wing spanning 15.5 inches. They are black to dark brown, with bands of cream and mahogany brown on their body. They also have yellowish ears and a unique yellowish-brown collar under their chin.

As one of the widely distributed bats in the U.S., you can commonly find them throughout Texas. They prefer living in arid desert habitats in the state. Females are typically heavier than males and give birth in June annually.

The Rafinesque’s big-eared bat is a smaller bat with large ears around one inch long. They are grayish-brown and grow around 1.5 to 2.2 inches long, with wingspans of 10 to 12 inches.

While commonly found in the southeastern states, they are limited to only the eastern counties in Texas. They prefer roosting in hollow trees, cave entrances, under bridges, and in abandoned buildings.

The American parastrelle is also known as the canyon bat and was previously called the Western pipistrelle. They are small bats, growing 2.4 to 3.1 inches in body length, with wingspans of 7.5 to 8.5 inches. They are typically pale yellow to white and have dark wings, feet, ears, and faces.

These bats are common throughout the southwestern states but only live in west Texas and some counties in central Texas. They prefer living in the desert and will roost in rock crevices during the day.

The western red bat, also called the southern red bat or desert red bat, lives up to its name with its distinctive red fur. They are typically 4.06 inches, with wingspans ranging from 1.38 to 1.77 inches.

You can find these bats in west Texas. Despite their name, they actually prefer roosting under leaves in the forest. These bats are known to live in sycamore, cottonwood, and willows near streams.

Both western and eastern red bats are set apart from all other types of bats by their red coloring.

The silver-haired bat gets its name from the white or silver tips on their black fur. They average around 3.94 in body length, with wings spanning 10.63 to 12.2 inches. They mostly feed on insects and moths make up 40 percent of their diet.

You can find these bats throughout the state, except for some areas in the southern counties of west Texas and the coastal counties in east Texas. They prefer living in coniferous or boreal forests near water bodies.

The Yuma myotis has short brown or tan fur, with a whitish underbelly. They grow between 3.31 and 3.9 inches, with an average wingspan of 9.25 inches.

These bats are common in the Rocky Mountains, east to west Texas. They prefer woodlands and desert habitats near open water. Nocturnal like most bats, they wait until dark before flying low over water surfaces to find food, typically small insects.

The long-legged myotis have long legs as their name suggests, small feet, and short ears. They are nearly black to reddish-brown and grow to around 3.27 to 3.94 inches in body length.

You may also like:  Nocturnal Animals in Florida (9 Species With Pictures)

You can only find these bats in west Texas. They tend to roost in trees, buildings, or rock crevices. However, you can also find them in mines or caves at night. Around 75 percent of their diet is moths, but they will also eat spiders, termites, beetles, and flies.

The evening bat has black ears but mostly dark brown bodies, sometimes with a reddish or bronze tint. They grow to around 1.9 to 2.6 inches long, with wingspans of 10 to 11 inches.

These bats are mostly in south and east Texas, including near the Fort Worth and Dallas area. Unlike most bats, you won’t find this species in caves. They prefer forests and open habitats, such as wetlands and river corridors.

The northern yellow bat gets its name from its long, silky yellowish-brown to yellowish-orange fur. These bats typically grow around 4.6 to 5 inches in length, with wings spanning 14 to 16 inches.

You can find them in south and east Texas, typically in counties closer to the coast. They prefer roosting in trees near permanent water, including in pine and hardwood forests. You can also find them in Spanish moss, dead palm fronds, or pine groves.

Sometimes called desert bats, the pallid bat prefers desert habitats. In Texas, you can commonly find them in the panhandle, west and south Texas, and western counties in central Texas.

These bats are light brown to creamy yellow and their faces have small wart-like glands that produce a skunk-like odor. They typically grow around 2.36 to 3.35 inches in body length.

The Seminole bat is mahogany with white-tipped fur, giving it a frosty appearance. They grow 1.8 to 2.7 inches in body length and have short ears and wings spanning 11 to 13 inches.

These bats are typically found in east-central Texas. They prefer lowland forests, including those with pine trees. Although you can find a few together, they commonly roost alone and have a preferred diet of insects, including bees, wasps, ants, beetles, and moths.

Although the common vampire bat was previously only found south of the U.S. border, they have recently expanded their range to south Texas, especially in the Lower Rio Grande Valley in the state. They roost in colonies in caves, hollow trees, abandoned buildings, and tunnels.

These bats are around 3 to 4 inches long with wingspans twice their body size. They get their name from the fact that they feed exclusively on animal blood – consuming around 4 teaspoons of blood daily. Due to this diet, this species is known to damage livestock and have rabies.