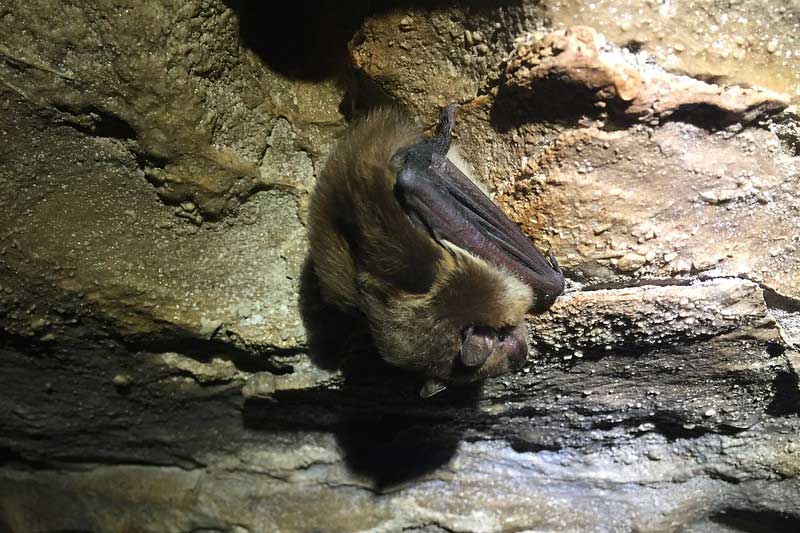 Bats are interesting animals we commonly associate with living in caves, but some also prefer to roost in trees or abandoned buildings. These animals are also more similar to us than we think! The bones in their wings are made of the same bones in our fingers. Some bats in Florida live in the state year-round while other species migrate there for warmth.

Florida’s multiple habitats filled with trees, caves, and urban areas provide great roosting options for bats. While some of the 13 species living in Florida are endangered, many are commonly found throughout the state. This article will cover all the bats you can find in Florida, where they roost, and other facts about them.

The southeastern myotis is brown and gray to brownish-orange. These bats grow 1.9 to 2.1 inches in body length, with wings spanning 9 to 11 inches. They eat mostly mosquitoes but will also feed on beetles, moths, and crane flies.

These bats roost in caves, bridges, culverts, and hollow trees and will emerge during warmer periods. You can find them in the northern half of Florida, especially the panhandle, and south to Manatee County and Volusia County along the coasts.

The Brazilian (or Mexican) free-tailed bat is grayish-brown and grows 2.2 to 2.9 inches, with 11 to 13 inches wingspans. They are extremely fast, flying at speeds of up to 99 miles per hour and reaching up to 10,000 feet high. That’s as high as a bald eagle can go!

They are the most common bats found throughout Florida, except in the Keys. They roost in colonies and can be recognized by the odor they emit. This smell comes from a scent gland they have that releases a musky odor.

As their name suggests, eastern red bats are various shades of red, including brick-red, yellowish-red, and reddish-orange. Females are typically duller than males, which is usually rare in bats for males and females to be different in color. These bats grow 2 to 2.4 inches long, with a wingspan of 11 to 13 inches.

You can find them commonly in north and central Florida. They are rare in the south and don’t live in the Keys. They are solitary bats that also prefer to capture their prey in the air. These bats live in forests and hedgerows, preferring to roost in foliage, such as deciduous trees and coniferous trees.

The evening bat is typically dark brown but sometimes has a reddish or bronze tint. It has a broad muzzle and short ears. They look similar to the big brown bat but are smaller at 1.9 to 2.6 inches in body length, with wings spanning 10 to 11 inches.

These bats are common throughout Florida, with the exception of the Keys. They are forest bats living in colonies of a few bats and prefer to roost in tree crevices, behind loose bark, or sometimes in buildings. Their main diet includes flying ants, flying termites, moths, mosquitoes, beetles, and other insects.

The northern yellow bat is yellowish to grayish brown, allowing them to camouflage in dead palm trees where they roost. These bats are around 2.8 inches in body length and have wingspans of 14 to 16 inches.

Except for the Florida Keys, you can find these bats throughout the state. Like most bats, they hunt prey using sound waves, also known as echolocation. They commonly eat damselflies, leafhoppers, beetles, flying ants, and other insects.

The Seminole bat is similar in color to the eastern red bat. However, the Seminole bat is more mahogany with white-tipped fur and males and females have no color difference. They typically grow between 1.8 to 2.7 inches in body length, with 11 to 13 inches wingspans.

These bats are commonly found throughout the state, but less common in the southernmost counties of Monroe, Miami-Dade, and Broward. They are solitary animals that prefer roosting in Spanish moss and pine trees.

The gray myotis is a uniformly gray bat growing 1.6 to 2.2 inches in body length. They have wingspans of 11 to 13 inches and are a cave-dwelling species. Both the U.S. Fish and Wildlife Service and the Florida Fish and Wildlife Conservation Commission classify them as endangered.

These bats are most commonly found in Jackson county, with only a few caves in the panhandle where they can roost. Few of these bats stay in Florida during the winter, as they are known to migrate north to hibernate in caves.

The smallest species in Florida, the tricolored bat is varying in color from grayish-yellow and light brown to silvery gray. They also have contrasting pink skin on their forearms and have long ears. These bats are 1.4 to 2 inches in body length, with wingspans of 8 to 10 inches.

While not abundant in Florida, you can find them throughout the state, except for the Keys. They were previously known as the eastern pipistrelle, since they were originally believed to be related to the European pipistrelle bat.

The velvety free-tailed bat, also known as the Pallas’ mastiff bat, has short dark gray to dark brown velvety fur. They grow between 2.3 to 2.6 inches in body length, with wings spanning 10 to 11 inches.

This bat is very rare and commonly found roosting in buildings. They are the one species you can find in the Florida Keys from Key Largo to Key West. They were first discovered in 1994 and are believed to have arrived from Cuba.

You may also like:  Where Do Elephants Live in Africa?

As their name suggests, the big brown bat has furs of varying brown shades, including chocolate-brown, golden-brown, and reddish-brown. They look similar to the evening bat but are larger, growing from 2.1 to 3.2 inches in body length, with a wingspan of 13 to 14 inches.

You can find them throughout the state, except for the Keys and they are rarer in southern counties. These bats roost in colonies in dead trees as well as in buildings and under bridges.

As Florida’s second-largest bat, the hoary bat is between 2.8 and 3.1 inches in body length, with a wingspan of 13 to 16 inches. They have long thick fur that’s a mix of colors, such as yellow, cream, brown, and black. Their fur also has white tips, giving them a frosted appearance.

You can find these bats in north-central and north Florida from October to April. They are solitary and feed on flies, moths, beetles, grasshoppers, and other insects.

The Florida bonneted bat is the largest species in the state, growing 3.3 to 4.3 inches in body length, with a 19- to 21-inch wingspan. They are brownish-gray to dark gray and have broad ears slanting forward over their eyes, given them the name “bonneted.”

These bats roost in colonies and are only found in the southern counties of Florida, excluding the Keys. You can find them roosting in mangroves, pine rocklands, pine flatwoods, wet prairies, and residential, urban, or suburban areas. However, they are very rare and the Florida Fish and Wildlife Conservation Commission has classified them as endangered.

As their name suggests, the Rafinesque’s big-eared bat has very large ears of about an inch long. Their bodies are grayish-brown and only 1.5 to 2.2 inches long, with a wingspan of 10 to 12 inches.

You can find these bats scattered throughout Florida. However, they are most common in the northern and central areas of the Florida peninsula and in the panhandle. They prefer forested locations where they roost in small groups or pairs in caves or the hollows of dead trees. Sometimes you can also find them in abandoned buildings.