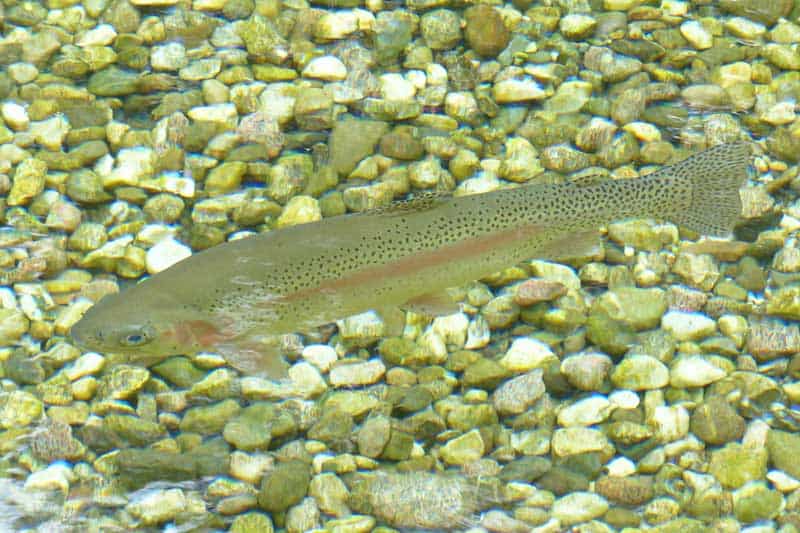 There are 3 main types of types of fish; bony fish, cartilaginous fish, and jawless fish. Different fish have different behaviors when it comes to breeding. Some of these fish will migrate to the same breeding grounds each your to reproduce. One category of fish that does this are called anadromous fish. In this article we’re going to learn about 8 different types of anadromous fish.

But first, let’s define anadromous and talk just a bit about what it means!

What does anadromous mean?

Anadromous fish are born in freshwater but immediately swim to sea where they spend most of their lives. They then swim to a river mouth and back upstream to the freshwaters where they were born in order to breed. Then the cycle starts over.

So in actuality, anadromous fish are simply migratory. Only they are able to live and survive in freshwater, and saltwater, and brackish water.

There are around 100 different species of anadromous fish in the world, salmon are probably the most famous ones as they swim against the current to reach their birthing grounds to breed each year.

Let’s look at some other well-known types of anadromous.

Most species of sturgeon, like the Atlantic sturgeon, are bottom-feeders and also anadromous. Many times they do inhabit freshwater but can often be found living in brackish estuaries.

These fish will mature in the oceans and return to the river of their birth to swim upstream and breed. The young will remain in the river, often for several months after birth, before venturing out into the open sea.

Among the most well-known of all anadromous fish is probably the salmon. The 5 species of Pacific salmon that live in North America waters are the chinook, coho, chum, sockeye, and pink salmon. There is also one species of Atlantic salmon.

Chinook salmon are the largest type of salmon and can reach 58 inches and 126 pounds. Unfortunately there are widespread declines in salmon populations which is affecting the ecosystems that depend on them.

The Atlantic striped bass, sometimes called the rockfish, is a perciform fish found mainly off the Atlantic coast of North America. They’re known for being anadromous and also commonly fished by humans.

Adults of this species typically reach 20-40 pounds, but there have been instances of striped bass weighing upwards of 100 pounds. Four bodies of water that are important to the breeding of striped bass are  Chesapeake Bay, Massachusetts Bay, Hudson River, and the Delaware River.

Several species of trout are anadromous. One of the most well known anadromous trout is the rainbow trout. Rainbow trout that spend their lives in freshwater can weigh between 2 and 8 pounds, and reach about 16 inches long. Steelhead trout, which is actually the same species as as a rainbow trout, can reach lengths of up to 45 inches in length and weight over 50 pounds.

The difference is that the steelhead spends 2-3 years in freshwater, followed by 2-3 years in the ocean doing more growing. This allows them to grow much larger. Unlike salmon, steelhead trout will also spawn multiple times… assuming they make it through the gauntlet that is their migration.

You may also like:  15 Examples of Animals With No Legs (Pictures)

Rainbow smelt are very small anadromous fish that are widespread, invasive (non-native), and quite small. They have been introduced to many landlocked states in the U.S. and are causing problems anywhere they are by negatively affecting native fish populations. They have recently even invaded the Great Lakes.

Smelt are native to both the Atlantic and Pacific Oceans where they live and mature in the ocean for 2-6 years. Once ready, they will swim in into the freshwaters where they were born to spawn.

American shad are anadromous fish that spend the majority of their lives in saltwater. Like other anadromous fish, they migrate upstream to spawn when they are ready. Every Spring and Summer, shad will swim to the freshwaters where they were born and the females will lay up to 600,000 eggs over the course a few days.

American shad can reach up to 30 inches in length and weight up to 30 pounds.

River herring are also anadromous fish that. River herring is actually a term used when referring to alewives and blueback herring. These fish are common alone the East coast from Florida to Maine and are most commonly used as bait for lobster and various fish.

Sea lampreys are parasitic fish that are native to coastal North Atlantic watersheds. Like other anadromous fish, they spawn in fresh water then swim to sea where they spend part of their lives. After 1.5 to 2 years they will return to their birthplace and breed to start the cycle over.

Sea lamprey are different from the other fish on this list in a few ways. One is that they don’t swim to sea after hatching. Larval sea lamprey spend up to 8 years buried in stream, river, or lake bottoms feeding on planktonic drift. They eventually transform into what looks like a lamprey, at which point they swim on to the sea.