You may be aware that there are several species of fish that swim upstream at a certain time of the year. These fish migrate upstream for one reason: to reproduce.

The fish who participate in this upstream migration are known for being Anadromous. In Greek: “ana-” means “up” and “-dromos” means “running,” translating Anadromous to “up-running.”

Anadromous fish make the long and treacherous journey back to the place they were born, to re-spawn and die.

What is interesting about Anadromous fish is how they manage to get back to the place they were born.

They possess the scent of their birth deep in their minds. When they mature, they instinctively follow it back to the refreshing calm waters where the circle of life will continue.

Most people have heard about the most common upstream swimming fish: the Salmon, but they may not know that there are quite a few other types of fish that do this too.

First up on the list of fish that swim upstream is the salmon, it’s also likely the first upstream swimming fish that comes to people’s minds.

The most common type of Salmon, the Atlantic Salmon, can be seen primarily on the West Coast in the Pacific. However, some live in other places too. The Great Lakes is one place these amazing fish live, but they also reside along the East Coast are familiar to the Atlantic Salmon, but they do not live there as frequently as they do in the Pacific.

The Latin word for Atlantic Salmon translates to “leaper,” which is no surprise because the swift and graceful fish can jump to heights of 12 feet!

The Atlantic Salmon is a beautiful, slender fish with a small face and can weigh up to 57 lbs.

Schools of these fish will travel up rivers connected to the Pacific, back to their place of birth to re-spawn.

Unlike other types of Salmon, who end up dying shortly after re-spawning, the Atlantic Salmon will typically live to spawn the following year again. The fish live to migrate another year are known as kelts.

The second fish we will discuss is native to North America and known as George Washington’s favorite fish, the American Shad. This fish swam up the Schuykill River and provided schools of fish to feed his troops at Valley Forge in 1778.

This beautiful silvery fish has a greenish band along its back and black spots along its shoulder area. Its body is short from its back to belly and long from head to tail. It ranges from 20in-25in and can weigh up to 12 lbs.

The American Shad is scientifically known as Alosa Sapidissima. Sapidissmina derives from the Latin word “savory,” which must imply that Washington’s troops had some delicious meals on-duty!

Aside from its place on plates, this particular fish is unusual because it can migrate upstream from the coastal waters to their origin and re-spawn multiple times.

You may also like:  22 Interesting Facts About Bluefin Tuna 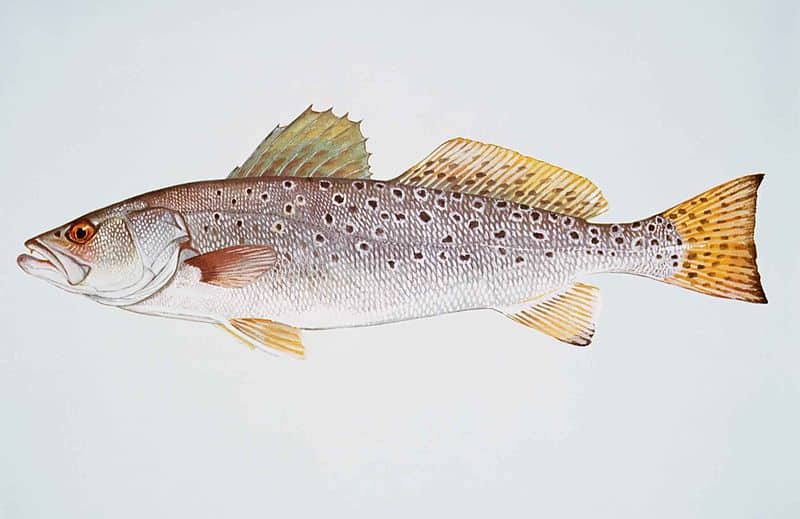 The third fish on our list is the Seatrout. Although trout is in its name, it is not a trout at all; instead, it belongs to the drum family, Sciaenidae. Fisherman appreciates the fish on slow days in the water because they will bite when nothing else will.

The fish is native to the East Coast, inhabiting waters from the Gulf of Mexico to the Cape Cod shore of Massachusetts; the fish do not thrive past Delaware.

The Seatrout averages about 3 lbs – 6 lbs but can get bigger in warmer areas like Florida. They average 20in-25ins in length.

Seatrout usually starts to spawn between May and September and follow the connecting rivers to the place they were born.

Like the American Shad, these fish can re-spawn multiple times.

Now we will talk about the Hilsa fish. Native to the coasts of Eastern Countries, it is a significant supply of food in India and happens to be Bangladesh’s honorary fish.

Hilsa is a widely distributed species that inhabit the coastal waters from the Arabian Sea to the Bay of Bengal.

Interestingly, the Hilsa contains no solid bones. Its average length is 23in and weighs approximately 6.5 lbs.

The last on this list of fish that swim upstream is the Sturgeon, also known as the “Acipenser,” when it comes from the family name Acipenseridae which has 29 species.

The Sturgeon fish is fascinating to look at and comes in all different sizes. It can weigh as small as 20 lb or as much as 2,500 lbs. Interestingly, bony plates known as scutes cover their heads, their bodies covered in similar vertebrae. They have about five horizontal rows of these plates running along the sides of their bodies.

Their tails are similar to that of sharks, and like sharks they also have a cartilaginous skeleton. The top lobe of the fin is longer than the bottom. This type of tail is called heterocercal, and it allows the fish to propel itself through the water.

Its mouth is toothless, but underneath the snout are four tactile barbels that the fish uses to sense invertebrates, small fishes, and other food on the bottom of the ocean floor.

They reside only in the Northern Hemisphere, mostly in the ocean; however, some species only live in freshwater.

The species that live in the ocean will travel up the connecting rivers to reproduce once every several years during the spring or summer.

The Anadromous fish are essential parts of our ecology. Many people (not to mention animals) feed off these fish, so it is vital to keep them thriving.

In 1965 the federal government recognized the significance of the Anadromous fish and created a law to protect, develop, and improve the Anadromous resources called The Anadromous Fish Conservation Act.