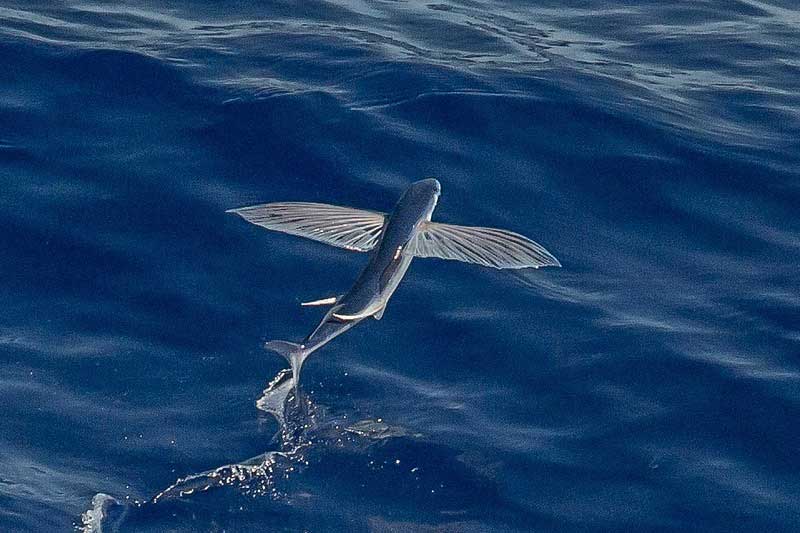 Whether in your house, the lake, or the ocean, you’ve probably seen a fish jump out of the water or tank. Not all fishes can stay airborne for a millisecond to two.

However, there are certain fishes that have the capabilities of doing so and can last longer in the air. A fish doesn’t just jump out of the water because it wants to; instead, there are reasons behind these actions.

There are several reasons why a fish jumps out of the water. It can be catching their food, avoiding predators, obstacles, and more.

Tank fish often find a way to escape because of low oxygen levels, dirty water, incorrect temperature, overcrowding, and getting rid of parasites.

Why Do Fish Jump Out of the Water?

Although “having fun” is not included in this list, a fish will try to get out of the water to survive. Let’s dive in to this list of reasons why fish jump out of water!

Out in the wild, no fish is safe from predators. Whether small or big, every fish is looking to survive every day. One of the reasons why a fish may jump out of the water is because it’s trying to avoid being eaten by a predator.

When a fish jumps, the fish and the predator don’t know where it will land. Additionally, the added splash when the fish lands back on the water brings an added surprise to the predator.

Because of their primitive response, a fish first forms a C-shape (its head almost touching its tail) to flick itself out of the water. Once they get back on the water, they pad their fins as quickly as possible to try and swim away.

A fish may also jump if it gets spooked. Imagine cruising in still waters when you suddenly hear a roaring boat coming towards you.

Under the water, a fish can get easily spooked and jump out of the water as a reaction. This creates a ripple effect which surprises all the fishes around the area, making every fish jump around.

Even if this is an extraordinary sight, this event can become dangerous. There are instances where a lot of heavy fish will instantly leap into the air and can hit boat riders. In some cases, a fish that can weigh pounds can hit a human and cause injuries and even death.

Most rivers have rocky areas that stop fish from going where they want. There are certain phenomena where hundreds or thousands of fish relocate to another area either to reproduce or get food during their hunting season.

To go to their spawning or hunting grounds, fish must travel for miles and avoid delays. This means they have to jump into the air if there are huge rocks in the area.

Waterfalls are also considered an obstacle to fish because of their strong current and splash. A fish must battle with the water while making their way to their respective grounds.

Another reason a fish will jump out of the water is that they are trying to catch their food. Most fish eat insects that are too close to the water.

You may also like:  10 Examples of Fish With Big Lips (With Pictures)

5. To Try And Go to A Better Location

Toxic smells and contaminated water can cause a fish to try and look for a better location. However, a fish won’t know if they are going to a better place. A mangrove killfish is an excellent example because they tend to escape toxic water in their area.

6. To Move Around While on Land

The last reason why a fish will jump out of the water in the wild is that they have to move around while on land. Although a fish knows how to wiggle around to move, jumping around makes it more comfortable and efficient.

They can get around faster when jumping and avoid injuries along the way.

7. To Get Rid of Parasites

The last reason why a fish will jump out of the water is that they try to get rid of external parasites. The higher they jump, the harder they fall, allowing them to eliminate the parasites attached to their bodies.

Why a Fish Might Jump Out of an Aquarium or Enclosure

A jumping fish doesn’t only happen in the wild, but it also happens inside a tank. When a fish tries to jump out of your tank, it can signify something is wrong in its environment. Here are four reasons a fish may want to jump out of its tank.

Just like in the wild, a fish has a natural instinct to try to get away from dirty and contaminated water. You must regularly check and replace your water in a fish tank to ensure your fish live in a safe environment.

A fish will continuously jump around if your tank has insufficient oxygen. Ensure the equipment you use to provide oxygen inside your aquarium has a suitable capacity. You can also plant aquarium plants to ensure enough oxygen for your fish.

Another reason a fish will jump out of a tank is that it may be overcrowded. There’s an aquarium requirement if you have a certain number of fish in your tank. Make sure that you have the right aquarium size to accommodate your fish.

It’s essential in an aquarium to have the right set of water temperatures. If the temperature is too high or too low, the fish may want to get out of the water. Get your tank a mercury thermometer to ensure that your aquarium has the right temperature.

There are many reasons why a fish would want to jump out of the water. Whether inside an aquarium or in nature, they do this to ensure a safe environment, get away from predators, or get their food.