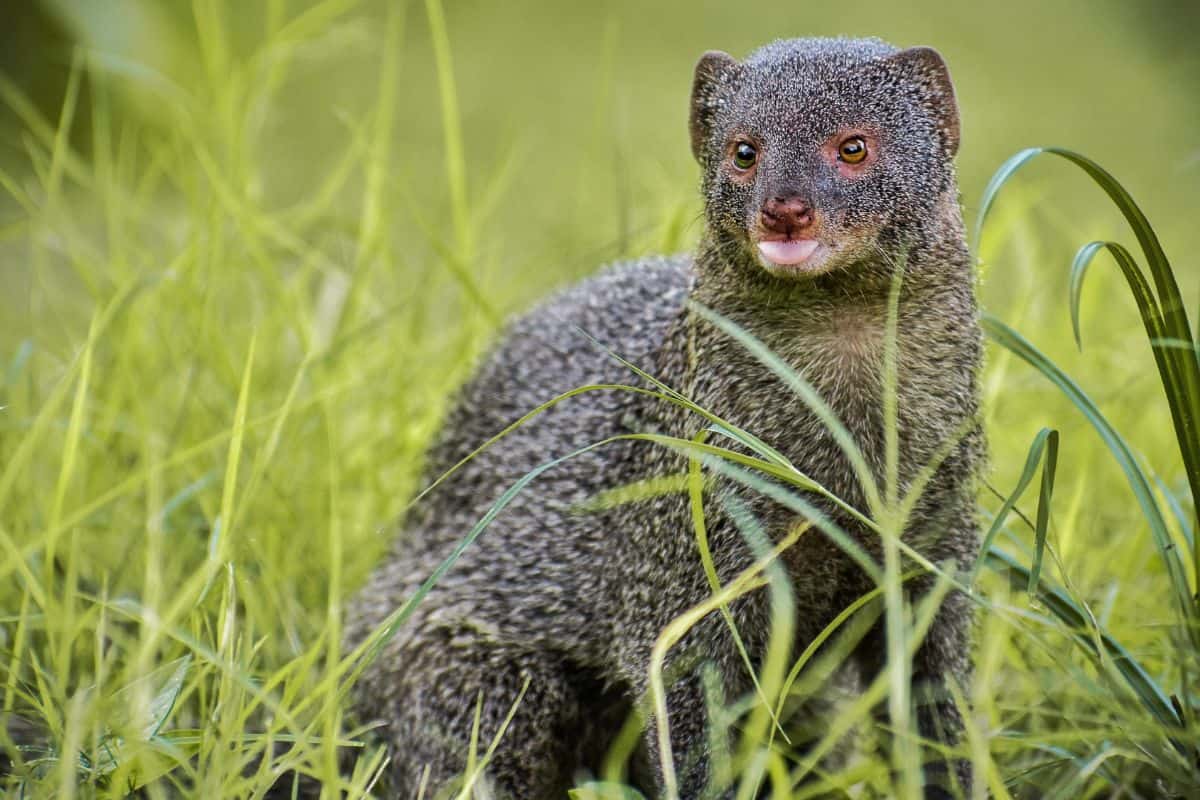 Mongoose is a small and sleek species that inhabit the forest and plains of Africa and Asia. Experts believe that mongooses can develop a protein that provides a layer of protection against a venomous snake’s venom which allows them to hunt the deadly cobra. The physical features of a mongoose are a long and furry coat with a pointed face and a bushy tail.

Many animals share traits and characteristics with this mammal, so in this article we’ll learn about 6 animals like mongoose.

Mongooses live in burrows and feed on small mammals, birds, reptiles, eggs and seldom fruit. Below, we’ll tackle the other animals similar to mongooses. These animals can be in the same family class as the mongoose or have the same features and abilities.

Let’s learn more about what animals look like in Rikki-Takki-Tavi’s The Mongoose in the Jungle Book!

Both weasel and mongoose have undeniably similar features but are from different mammal classes. Mongoose belongs to the superfamily filiform– cat-like carnivores, while the weasels are dog-like carnivores or superfamily caniforms. Weasels can grow up to 12 inches long and have long slender bodies, flattened heads, long necks and short legs.

During winter, the weasel’s color changes from white to brown, while its top is brown and yellow in summer. Weasels also have short, dense hair and its tail is rounded at the tip, unlike the mongoose with silvery fur and bushy tails.

Meerkats are small mongooses with slim bodies, broad heads, large popping eyes, pointed snouts, long legs, and thin brindled coat tails. They belong to the same family as mongooses–with a weasel-like appearance. The meerkat’s body can grow up to 19 inches long, including the tail.

Meerkats have dark patches around their eyes to shield them from the sun’s rays. They are known for their upright stance, and they can spot birds miles away from the sky.

Meerkats have the most developed sense of sight. Their long and horizontal pupils give them a broad scope of vision without tilting their heads.

Another animal that could resemble a mongoose is the ferret. Ferrets are small, furry creatures with cone-shaped noses, long bodies, shorter legs, and long claws.

In the mustela genus, ferrets are related to wolverines. Ermines, minks, and weasels. Some people often make ferrets as their pets— a popular yet controversial choice.

Due to their inquisitive nature, long and lean build ferrets are equipped for getting into holes and chasing down rodents, moles, and rabbits out of their burrows. They have similar facial features to mongooses but have opposite characteristics. Ferrets are known to be playful, mischievous, and entertaining animals.

Genet and mongoose may not have the same physical attributes, but the two have slight similarities. Also, genet is closely related to mongoose because it is related to the civet family class. The Genetta genetta is the only viverrid class species living in Europe since other species reside in Africa.

Genet has a slender, cat-like body, a small body with a pointed muzzle and large almond ears. They also have large eyes and whiskers with a length of 2.8 inches.

You may also like:  10 Interesting Facts About Bear Cubs (Pictures)

The genet also has semi-retractable claws and short legs with cat-like feet. The fur of this animal is soft and dense, with a pale gray coat and black marking all over its body.

Another animal that could resemble a mongoose is a civet. Civets are found in Asia and Southern Europe and have a broadly cat-like appearance. However, you could mistake civets for mongooses due to their extended and pointed muzzle.

The civets can grow from 17 to 28 inches, excluding the tail. Civets are commonly called civet cats; however, they are not cats. They are more closely related to mongooses than they are to cats.

Civets have a thickly furred tails, small ears, and pointed snouts. Their fur varies among species, but the most common shade is grayish or buffs with stripes or black spots patterns, or it could be a combination of the two.

Though they have different fur patterns, you couldn’t deny that there’s a resemblance between the Linsang and Mongoose. There are four species of linsang– the two can be found in Asia while the others are in Asia. The Asiatic Linsang (Prionodon) comes in two types; banded and spotted.

Linsang has long striped tails and cat-like teeth, an arboreal carnivorous mammal. The banded Linsang is the rarest of the civets family. Linsang has an elongated and slender muzzle, short legs, sinewy bodies and short fur.