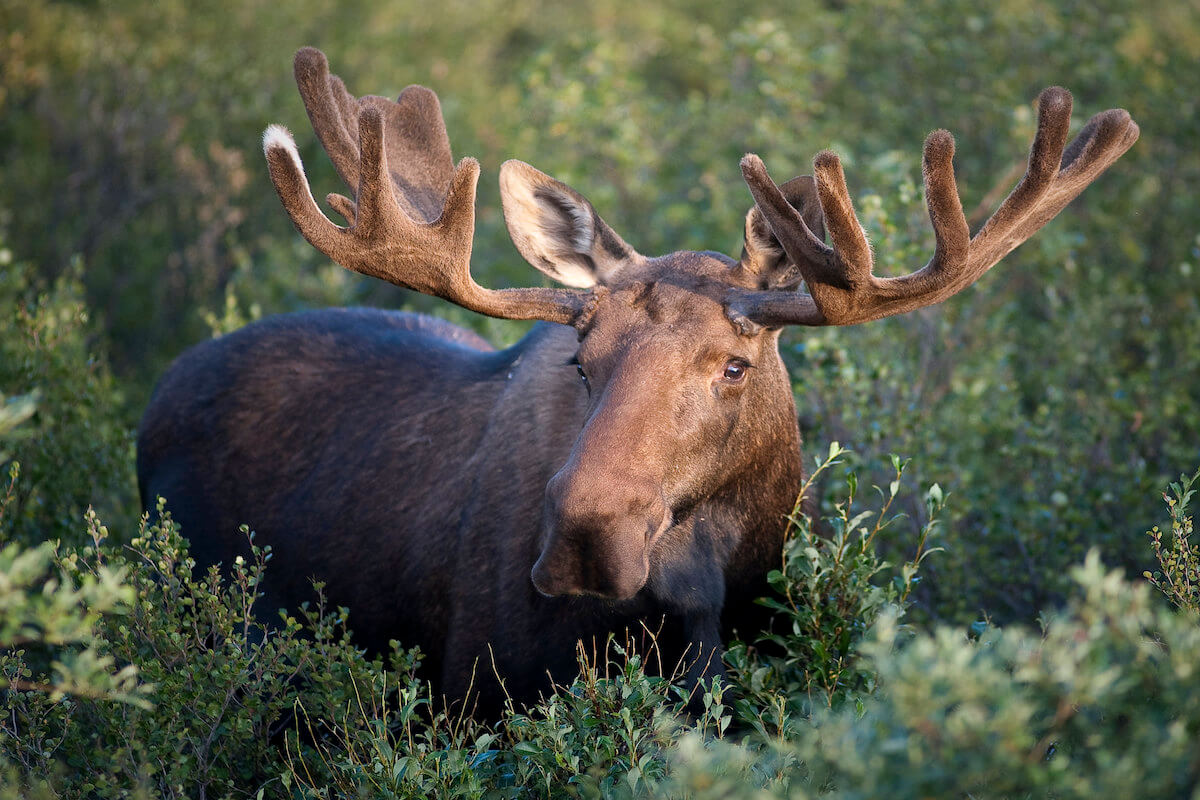 Moose are the largest living deer species worldwide and the tallest mammal in North America, with adults standing 6 feet tall from the ground to shoulder. There are 4 subspecies of moose (Alces alces) in North America. The estimated total moose population in the United States is about 275,000 – 315,000 and in Canada, the estimate is between 500,000 and 1 million moose, depending on the source.

Large moose populations have a range in 19 states of the U.S. However, instances of long-distance migration when searching for food has led to some moose showing up outside their natural range. Find out more information about the moose population in the United States below. We’ll dive into information on the estimated populations and ranges by state, including what regions in these states they are more commonly seen. 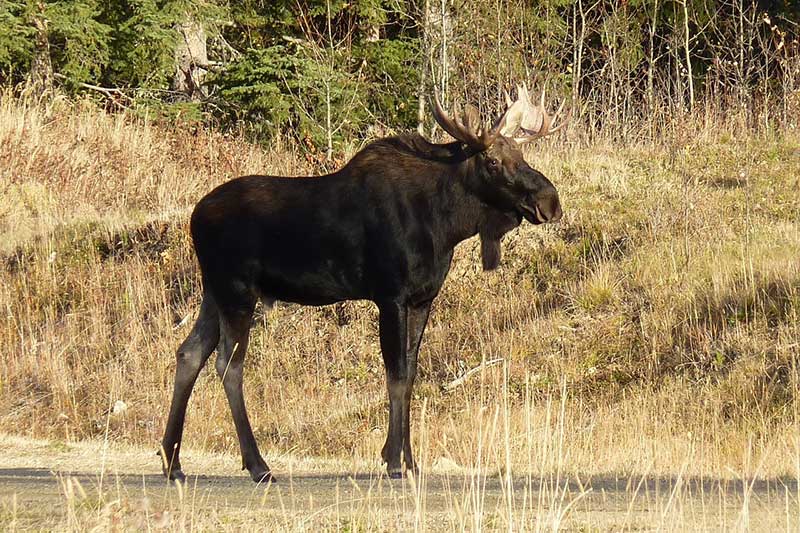 Before diving into the states with moose populations, let’s first omit states without an established population of these large deer species. There may be sightings in these omitted states listed below due to long-distance travel and changing temperatures. However, currently, the main moose populations are only in 19 of the 50 U.S. states.

31 states that do not have Moose populations:

The following population estimates were taken from state government websites and other authoritative sources. They are accurate to the best of my knowledge.

Alaska has a larger population of moose than any other U.S state, with an estimated 175,000 to 200,000 moose widely distributed throughout the state. In fact, you can find around two-thirds of the U.S. moose population in Alaska. They are abundant in timberline plateaus and along the major rivers of Interior and Southcentral Alaska. Moose are also recent arrivals to limited areas in Southeast Alaska, such as the Stikine River. See a range map for moose in Alaska here.

Although Colorado used to only see a few stray moose wander into the state, in 1978, wildlife managers arranged for the first transplant of 12 moose in Colorado’s North Park region. Today the population is thriving, with almost 3,000 moose statewide. You can find them in riparian areas, in sagebrush, and above timberline high in the mountains.

Idaho has an estimated 10,000 to 12,000 moose population, ranging from the North’s heavily timbered forests to the Snake River Plain in the South. While some populations are declining in Northern Idaho, the moose population is expanding its range into the south-central regions of the state. To hunt moose in Idaho, you must apply for a controlled hunt tag.

Maine has the second-largest moose population in the U.S and the highest in the lower 48 states. The population is estimated at 60,000 to 70,000 animals, a significant increase from the 2,000 animals in the early 1900s. The state currently has a moose management goal to maintain a healthy population while providing hunting and viewing opportunities. Hunting moose in Maine is popular, with around 50,000 applications for the 2,000 to 3,000 moose permits the state typically issues.

According to the New England Research Institute, there are around 1,000 to 1,500 moose in Massachusetts. The population is most abundant in the Central and Western regions, with occasional sightings in Eastern Massachusetts. During the summer months, you can typically see moose in the wetlands, where they feast on sodium-rich aquatic vegetation.

Moose are a native species in Michigan, however, their numbers have significantly declined since European settlement. Today the population has disappeared from the Lower Peninsula regions and remains only in the Upper Peninsula. The most recent biennial survey in 2019 estimated a moose population in the western Upper Peninsula of Michigan as 509 animals. An increase from the 323 animals recorded in 2015.

A majority of the moose population in Minnesota is in the Northeastern regions. The Department of Natural Resources (DNR) 2022 aerial moose survey recorded a population of 4,700. Although this is almost 50% fewer animals since the population peak in 2006, it’s a significant increase since the decline in 2013, and the moose population is reported to have remained stable in recent years. You can read the DNR 2022 Aerial Moose Survey and see a map of the survey plots here.

Moose occupy most of the forested landscapes in Western Montana, ranging from the Cabinet Mountains in the Northwest to the Centennial and Big Hole valleys in the Southwest. However, they also inhabit wetlands in the East, especially along the Missouri River. A study on Moose conducted by the Montana Fish, Wildlife, & Parks (MFWP) reported average moose sightings in the state ranging from 2,334 to 4,675 per year since 2013. You can find species range and distribution maps in Montana here.

The only moose species you can find in Nevada is the Shiras Moose, also known as the Yellowstone Moose, and the smallest of the North American moose subspecies. They are new residents of Nevada and have adapted well despite the state being a less traditional habitat. According to Go Hunt, the Nevada Department of Wildlife (NDOW) recently estimated around 40 to 50 moose living in the state. Earlier in 2022, the NDOW confirmed almost 500 sightings of moose – although some of these sightings could be from the same animal.

An estimated 3,300 moose are living in New Hampshire statewide. They occur in all ten counties, with the most abundant living north of the White Mountains and in the Great North Woods. A map and data of the moose density within major regions of New Hampshire can be found here.

Most of the moose population in New York is in the northeastern region in the Adirondack Mountains and the Taconic Highlands. However, they can occasionally be seen in the eastern Washington, Rensselaer, and Columbia counties. The moose population in New York disappeared in the 1860s but became firmly established again in the 1980s. Today, the Department of Environmental Conservation (DEC), estimates around 600 to 700 moose in the Adirondack Region.

Although moose aren’t abundant in Oregon, there is a population that established themselves in the Blue Mountains region, north of Elgin. It is believed they first wandered to Oregon from Washington or Idaho across the Palouse Prairie. The current Oregon population is estimated at 50 adults and calves. The herd is typically scattered across parts of the Wallowa-Whitman and Umatilla national forests.

Typically found in forested areas, moose populations in Utah are most abundant along the Wasatch Front and in the Northeastern and Northern regions. There are between 2,500 to 3,000 moose in the state. They represent one of the largest, southernmost naturally occurring moose populations on the continent.

The moose population in Vermont has remained relatively stable in recent years at approximately 3,000 animals. They are most abundant along the spine of the Green Mountains as well as in the Northeast regions, including Orleans, Essex, and Caledonia counties. In 2021, the state awarded 100 hunting permits by lottery, which was a 45 permit increase from 2020.

According to the Washington Department of Fish and Wildlife (WDFW), the estimated moose population in the state is 5,000 animals as of 2015. You can find them mostly in the Selkirk Mountains, with smaller populations in the Okanogan, North Cascades, and the Blue Mountains. Although moose prefer forested areas, they have been seen wandering to other parts of the state, such as the Columbia Basin’s high desert country.

The moose population in Wisconsin is low and not officially established, but it doesn’t mean that sightings are nonexistent. There are around 20 to 40 individuals in the state and occasional moose sightings of individuals wandering over from Michigan or Minnesota. Hunters in the state are cautioned not to accidentally shoot moose during the white-tailed deer hunting season.

Moose live in various river bottom areas and mountain ranges of Wyoming, with the greatest numbers in the Bridger-Teton National Forest region to the south of Jackson. According to Wyoming Game and Fish Department (WGFD) officials, the moose population in Wyoming is just under 3,500 animals. The population has been decreasing since the high of 10,000 animals in the mid-1990s. Predictions of why the population has trended downwards include the increase in wolves and the expansion of grizzly bear ranges.

A quick look at moose

Moose are large majestic land mammals, with bulls growing stunning antlers of up to 6 feet long. They can run up to 37 mph and are also excellent swimmers, swimming up to 12.4 miles with a speed of at least 6 mph. Besides human hunters, wolves and bears are the two biggest natural predators for the moose population. However, most states regulate hunting licenses to help protect the health of moose populations.

Moose are herbivores, eating mostly leaves, twigs, and bark from trees and shrubs. Some of their favorite trees to eat are the native willow, balsam fir, and aspen trees. Moose will also eat aquatic plants, sedges, pond weeds, and grasses. They can forage for aquatic plants both on and under the water.

Moose prefer habitats that are forested areas and typically live in boreal, temperate broadleaf, and mixed forests. You can also find them near wetlands, rivers, lakes, swamps, and open country in mountains and lowlands if there is a forest nearby.

The mating season for moose is during the fall from late September to mid-October. Also known as the rutting season, bulls (adult males) will move towards lower elevations to find cows (females). The bulls frequently fight and spar in competition for a mate.

Moose don’t hibernate in the winter. They are well adapted to survive in wintery climates. Moose have one of the most insulating hair coats and thickest hides among land mammals that they shed every spring. They can also handle snow depths of up to 36 inches and use their hooves to search for food in the snow.

Moose are typically found in the northern regions of the U.S., from Maine to Washington and up into Alaska. However, there are populations in more southern states like Utah and Nevada. While some populations stay year-round within a range, others can migrate up to 100 miles between seasonal ranges, and more moose sightings are reported in states without an established population.

There 4 subspecies of Moose in North America, they are as follows:

If you encounter a moose

Although moose will typically flee when they feel threatened, under certain circumstances, they can become aggressive. People can be hurt when a moose charges, stomps, or kick to protect themselves or their young. Bulls are also typically most aggressive during the rut, or mating season.

If you encounter a moose in the wild, make sure not to approach them and watch their behaviors carefully. A moose walking slowly towards you could be ready to attack, especially if the hairs on its hump are raised, it’s licking its lips, grunting, stomping its feet, or the ears are laid back.

Here are some quick tips for moose encounters: