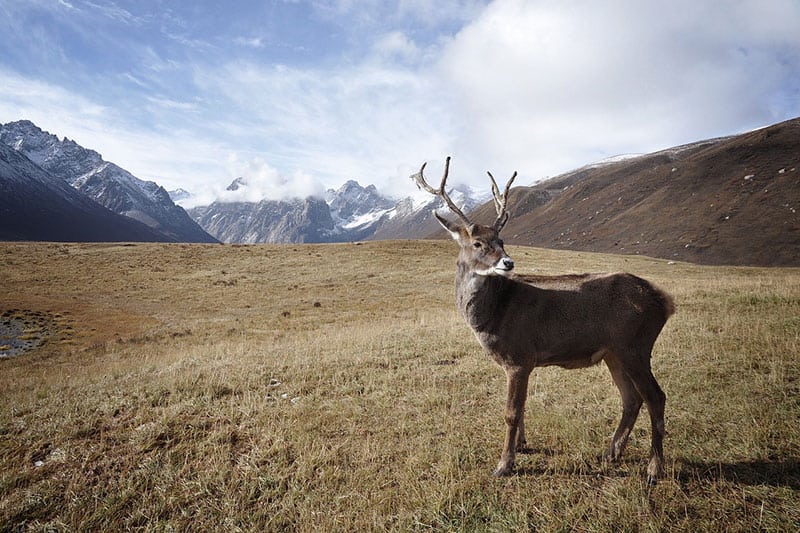 Animals have evolved over the years to have various interesting characteristics. One of these features is antlers that grow out of their heads. Animals with antlers typically have them for sexual attraction purposes or to use as weapons in fights. Since males are commonly the gender to fight each other, especially to control harems, most animals with antlers only have antlers in males. However, there are exceptions!

In this article, we will look into more details about 8 animals with antlers, the size of their antlers, and how they use them.

Antlers are true bone single-structures that are an extension of the animal’s skull and typically only exist in males. They have a covering called velvet that comprises nerves and blood vessels. Animals with antlers also shed their antlers annually.

Horns are two-part structures: a bony core that is an extension of the animal’s skull and a covering of keratin, which is similar to human nails and hair. For many species, horns grow continuously and are permanent. With the only exception of the Pronghorn antelopes, animals with horns don’t shed their horns annually.

Here are 8 animals with antlers you can find in North America. Let’s find out who has the largest antlers!

Caribous are one of the few animal species in which the female also grow antlers. Male antlers typically grow up to 4.25 feet long. Females typically have antlers around 1.5 feet in length.

These animals are commonly called reindeer in Europe. However, in North America, they are called caribou if they are wild and reindeer when domesticated. You can find caribous in the Arctic Circle landmasses, Alaska, and southward in boreal and sub-boreal forest ecosystems.

In North America, there are 7 main subspecies of caribou that are all well adapted to their harsh habitats. They are known to use their antlers to find food by scraping away the snow. Their antlers also come in handy when defending themselves.

Moose are large animals that stand 7 feet tall and weigh around 1,300 pounds. The male’s flat, wide antlers can grow up to 6 feet long and weigh up to 40 pounds. They shed them during late August. Moose typically use their antlers to defend themselves against bears and wolf packs when they have to charge. They can also attack by slapping with their front legs or kicking with their powerful hind legs.

These animals are excellent swimmers and can dive into and stay up to 50 seconds underwater when finding food. You can commonly find them in the northern areas of North America and Eurasia. In North America, there are recognized subspecies in the following habitat ranges:

White-Tailed deer have antlers with one of the fastest-growing tissues worldwide and tend to grow in spurts. They will regrow their antlers in spring and summer. This growth cycle corresponds with the mating and breeding season, so they can use their antlers for dominance and to attract females.

As their name suggests, these deer have white tails. A young deer is called a fawn and will typically have white spots similar to what we recognize as the Disney character “Bambi.” These deer are great swimmers and have excellent hearing and eyesight to identify predators and escape using large streams or lakes.

You can find White-Tailed deer from northern Canada all the way to sub-equatorial South America. There are a total of 38 subspecies of these deer in this range.

The Black-Tailed deer, also known as the Mule deer gets its name from its large ears. You can find these animals in western North America, from Southern Alaska all the way down to the tip of Baja California and Mexico.

These deer have antlers up to 2.5 feet long and 3.2 feet wide. They have a similar growth cycle and reasoning for their antlers as white-tailed deer, with regrowth happening between April and August. They also have black tails and bodies that are typically brownish-gray during winter months and reddish-brown in the summer.

Common subspecies of black-tailed deer are:

The Rocky Mountain Elk has the largest antlers among elk subspecies. All elk subspecies use their antlers mostly for mating reasons. Males will spar with each other for the right to mate with a female. The antlers indicate their abilities but also their health, with the larger antlers meaning healthier bodies.

As their name suggests, they are native to the Rocky Mountains in North America but have since been transplanted to other areas. You can also find these animals in Central Asia’s high mountains. They typically prefer open woodlands, especially hardwood forests of conifers or aspen.

The Roosevelt elk is the largest in body size compared to other elks, but still has smaller antlers than the Rocky Mountain. An adult male can weigh between 700 and 1,100 pounds and grow 6 to 10 feet in length.

You can find these animals in the Coastal Pacific Northwest regions in the United States. They prefer living in old-growth forests and typically live in areas they can graze on grasses. These elk also migrate seasonally, spending the summer in the mountains and moving to lower elevations to avoid winter storms.

The Manitoban elk can be found in the northern Great Plains of America, especially North Dakota. You can also find them in the southern areas of the Canadian Prairies, including Manitoba, where they get their name. They are well adapted to aspen parklands and prairies.

You may also like:  21 North American Animals That Start With N (Pictures)

Adult males typically weigh between 634 and 1.053 pounds, while females average around 606 pounds. They have dark features and their impressive antlers have long sharp points, also known as tines.

A California native species, the Tule Elk is a flagship of North America. They are grazers and important to the ecology of their habitats by reestablishing native grasses they transport in their hooves. These animals have the smallest body size of all elk subspecies, and are sometimes called the dwarf elk. They are half the size of the Roosevelt elk and adult males weigh between 450 to 550 pounds.

Another fact to note about Elks in Northern America is there used to be two additional species besides the four listed in this article. The following two are now, unfortunately, extinct: