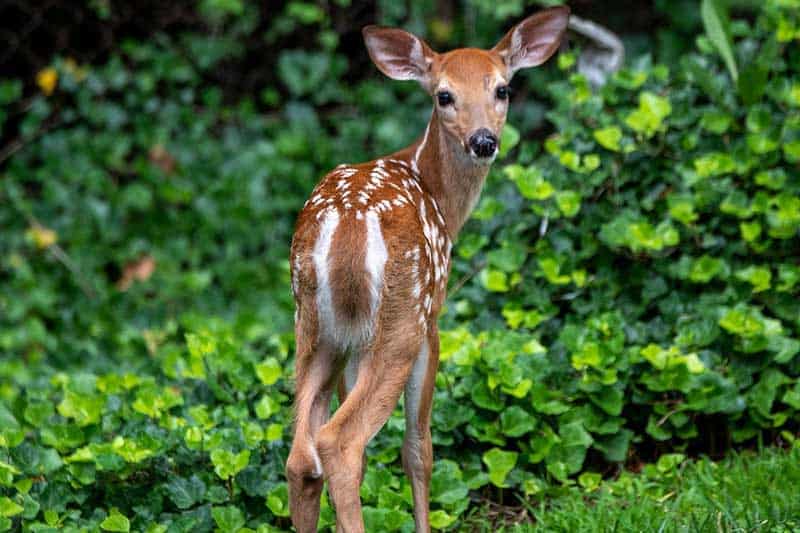 If you live anywhere but the Southwestern United States, then you probably encounter White-tailed deer from time to time. They are the most widely distributed species of deer across North America and South America and can be found in rural, wooded areas and even built up suburban areas. In this article, we will be covering all you need to know about white-tailed deer.

The white-tailed deer belong to a group of animals called ungulates. Ungulates are hoofed mammals, including camels, pigs, sheep, and of course deer.

Deer fall into the taxonomic family Cervidae, which includes over 40 different species of deer. White-tailed deer have even been broken up into 26 different subspecies, and 17 of these subspecies occur in the United States.

As the name suggests, White-tailed deer in fact have a white tail. However, it is the underside of their tail that is white that they display when threatened or alarmed. Their coat is a light, auburn brown and in the cooler months it shifts to a more light gray.

When first born, white-tailed deer have the same auburn brown coat but covered in quarter-sized white spots. Adult males and females can be distinguished by the presence or absence of antlers. Males have antlers that begin to grow at the start of sexual maturity, and the size of their antlers depends on their health, age, and genetics.

At shoulder height, they range from 21-47 inches tall. Males tend to be larger than females and are typically between 150 and 300 pounds and females range between 88 and 200 pounds.

White-tailed deer are considered to be a generalist species, meaning they can adapt and thrive in various habitat types. Many people associate white-tailed deer as being woodland animals and in some cases this is true.

White-tailed deer are almost entirely herbivorous, meaning they only eat plant matter. Because of this, in more temperate parts of their range where plant life is highly affected by the weather and season, their diet can be very variable.

They eat legumes, leaves, grains, fruit, plant shoots and stems. They can also digest things that many animals and humans cannot such as toxic mushrooms and even poison ivy. In more arid parts of their range, they even eat cacti.

While they are herbivorous, white-tailed deer have been documented in rare occasions to eat nesting songbirds. Songbirds are likely not their first choice for a meal, but instead are probably a last resort when they are feeling depleted or malnourished.

However, as mentioned previously, there are many subspecies of white-tailed deer. One subspecies in particular, the Key deer, is endangered and is only found in the Florida Keys. Key deer are at a disadvantage due to habitat loss, rising sea levels, extreme weather and the introduction of invasive species.

White-tailed deer occur widely throughout the United States. They are found in virtually every state except for Alaska.

They are also very scarce in small parts of Utah, Nevada, and California. It is believed that in these states, the white-tailed deer has been outcompeted by their relatives, the mule deer which are generally larger than white-tailed deer.

White-tailed deer can not only be found in the United States but also Canada and central and South America. They can be found in much of Southern Canada bordering the northernmost states. Additionally, they are found in almost all of Mexico, throughout central America and into South America as far south as Peru and Bolivia.

White-tailed deer breed once a year and their mating season is between October and December. During this season, the males, otherwise known as bucks will become territorial and irritable. They will rub their antlers on nearby trees to leave their scent in attempt to mark their territory.

If challenged, males will spar with other males using their antlers. They will charge against each other allowing for their antlers to collide with great force, all while in the presence of an adult female or doe.

The gestation period for a female is around 200 days, and most females will have one or two babies, also known as fawns. In some cases, a doe will produce three fawns.

Baby deer are born between May and June. Once born, the fawns will stay close to their mother to nurse.

Sometimes, mothers will leave their fawns behind while they go to forage, but this does not mean they have abandoned them. It is not uncommon to find a fawn hiding in tall grasses or other inconspicuous spots seemingly abandoned while they wait for their mother to come back.

Fawns are weaned after about two to three months, but they will continue to stick around their mother. Males will stay around until the breeding season, while female fawns may stay close to their mother for an extra year.

White-tailed deer do not have a particularly long lifespan compared to other large mammals. Does generally live a bit longer than males and may live between six and seven years while males on average live between three and four years.

However, there was one doe in South Carolina that was tagged as a fawn by biologists and lived to be nearly 14.5 years old until she was killed by a hunter. Most healthy deer die as a result of hunting rather than natural causes

In captivity, however, white-tailed deer can live even longer. This is typical of most animals as the pressures they face in the wild are severely minimized in captivity. In Texas, there are accounts of a captive doe living to be over 23 years old and even producing fawns up until that age!

Despite their large size, white-tailed deer have many predators. They are essentially defenseless, relying on their speed to evade predators which is obviously not always enough.

White-tailed deer are preyed on upon by bobcats, mountain lions, bears, wolves, coyotes and wolverines. In the southeastern United States, white-tailed deer are also eaten by alligators that pick them off as they go down to freshwater bodies to drink. In the Florida Everglades, they also face predation by large, invasive Burmese pythons.

It is difficult to measure an animal’s intelligence as humans and animals likely have different traits that can be attributed to their intelligence. Many people peg white-tailed deer as stupid because of their tendency to jump in front of moving vehicles when threatened. However, hunters have long hypothesized that white-tailed deer are much smarter than we give them credit for.

For example, most of the time, white-tailed deer will travel in areas with cover to conceal them. When in an area that lacks this cover, they will quickly move through to limit their opportunities of being seen by potential predators.

White-tailed deer are extremely keyed into their surroundings and if they catch a whiff of something unfamiliar or potentially dangerous, they will bolt. And if a hunter misses a shot on a deer, it is unlikely that they will ever get the chance with that same deer again because it will know to keep its guard up and what to look for.

In addition to many other animals, white-tailed deer suffer from habitat loss and humans encroaching on their habitats. This also leads to many collisions between them and vehicles and roads continue to spread into more rural or “wild” areas.

White-tailed deer are also threatened by chronic wasting disease which can spread rampantly through populations. Chronic wasting disease is an always fatal disease that is caused by a misfolded protein and affects deer, moose, and elk in North America. It leads to the essential breakdown of brain tissue and results in emaciation, loss of bodily functions and then death.