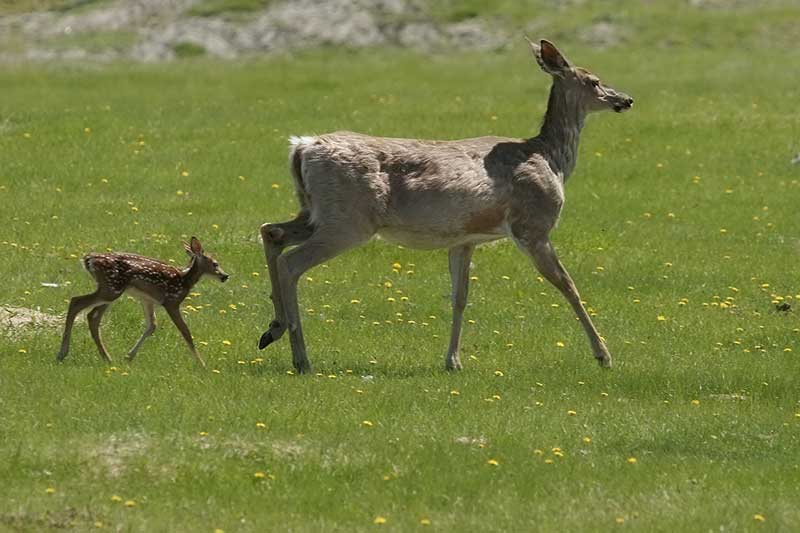 Deer are a staple animal in North America and are found in Mexico, Canada, and all spaces in between. They’re the most hunted large animal on the continent, and there are many kinds of deer in North America that can be seen and appreciated. The exact number of species is based on your definition of a deer. Technically, there are 58 subspecies of the family in North America, but really only 6 species of true deer.

6 Species of Deer in North America

The Whitetail Deer, also known as the Virginia Deer, is the most widely distributed wild ungulate in North America. It’s primarily distributed east of the Rocky Mountains and in most of Mexico.

The state that homes the most Whitetail Deer is Texas, with over four million deer. They’ve recently spread further North, as far as the Canadian Rockies, due to the conversion of land to agricultural use, which favors more deciduous vegetation for them. The Whitetail Deer is the most common to interact with around human activity.

The Whitetail Deer gets its trademark name from the distinctive white underside of their tail. They will raise their tail and flash the white underside when it sees a predator, which acts as a way to let the predator know they’ve been spotted and their attack would be wasted. Their coat changes from a reddish-brown in the spring to a gray-brown in the winter as a mild form of camouflage.

The Mule Deer is also known as the Black-tailed Deer, and it gets its name from its large ears that resemble that of a mule. Mule Deer are only found on the western Great Plains, in the Rocky Mountains,within the United States southwest, and on the West Coast of North America.

The breeding cycle of the Mule Deer is an important part of understanding their behavior. Their mating season begins in the fall and lasts for a period of a few days with males becoming more aggressive and competing for mates. If a doe doesn’t get pregnant, then they’ll try again the next month and fawns are born in the Spring.

The Caribou, also known as the Reindeer, is native to the northern parts of North America. It ranges from Alaska through Yukon, the Northwest Territories, and then south through the Canadian Rockies. Their habitat consists of the tundra and the boreal woodlands, depending on the time of year. Caribou are seasonally migratory, going from their birthing grounds to their winter feeding grounds in the tundra and taiga.

Both male and female Caribou can grow antlers, although the antlers are typically larger on males. The Caribou plays a large role in indigenous cultures, such as the Caribou Inuit, as they’ve depended on it for food, clothing, shelter, hides, antlers, milk, and transportation.

Even though Reindeer and Caribou are essentially interchangeable terms, in technicality, a Reindeer is the European name while Caribou is the name for the species in North America. Caribou actually comes from French qalipu, meaning “snow shoveler”, which refers to its habit of pawing through the snow for food.

You may also like:  Small Monkey Breeds (8 Types With Pictures)

The moose is the largest and heaviest species in the deer family and is a member of the New World deer subfamily. Most adult males have distinctive palm-shaped antlers that they use for decoration as well as mating displays. The word Moose is actually borrowed from the Algonquian languages, derived from moosu.

Moose typically live in boreal and temperate broadleaf forests in the Northern hemisphere, but they have been known to live as far North as subarctic climates. They usually live in Canada, Alaska, and New England, with Maine having the highest population of the lower 48 states.

Moose eat both aquatic and terrestrial vegetation and are solitary animals, unlike most species of deer. They travel among different habitats with the seasons in search of edible plants, cover from predators, and protection from weather extremes. They’re cold-adapted animals with thickened skin and a heat retaining coat that makes them extremely cold-tolerant, but during the hotter weather they’ll prefer to be immersed in cool water, as they make fantastic swimmers.

The Brocket Deer is the least common deer in North America with its spread only as far north as the Yucatan Peninsula. The term “brocket” comes from the French word for a stag in its second year that has yet to develop its branched antlers, which makes sense as their antlers are small, simple spikes.

This species of deer is especially small and shy, so they prefer to be active more at night. Because they’re nocturnal, they’re rarely observed in the wild. They can be found living alone or in mated pairs within clearly marked territory that they know intimately. They use this knowledge to find hiding places in nearby vegetation when predators appear.

Mated pairs remain monogomous, and like most ungulates, the males of the species compete for females by clashing heads. Their small and sharp antlers are used for stabbing, and they’ve also been known to bite one another. There’s no set mating season, but it’s more common to see these behaviors in the Autumn.

The Elk is one of the largest species within the deer family, coming second only to the moose. “Elk” is actually the term Europeans use for local moose, but within North America the moose and Elk are two very different animals.

Male Elk have large antlers that are shed every year. These antlers are integral to their ritualized mating behaviors, including posturing and antler wrestling with other males. Elk are also very well known for their bugling, which is a loud series of vocalizations that establish dominance over other males while attracting desirable females. This noise, depending on weather and location, can be heard up to 5 miles away.

Elks are a ruminant species, meaning they acquire nutrients from plant-based food by fermenting it in a specialized stomach prior to digestion through microbial actions. They have a four chambered stomach that allows them to feed on grasses, plants, leaves, and bark. They eat almost constantly during the summer and can comsume 8.8-15.4 pounds of vegetation daily.

You may also like:  15 Examples of the Shortest Living Animals