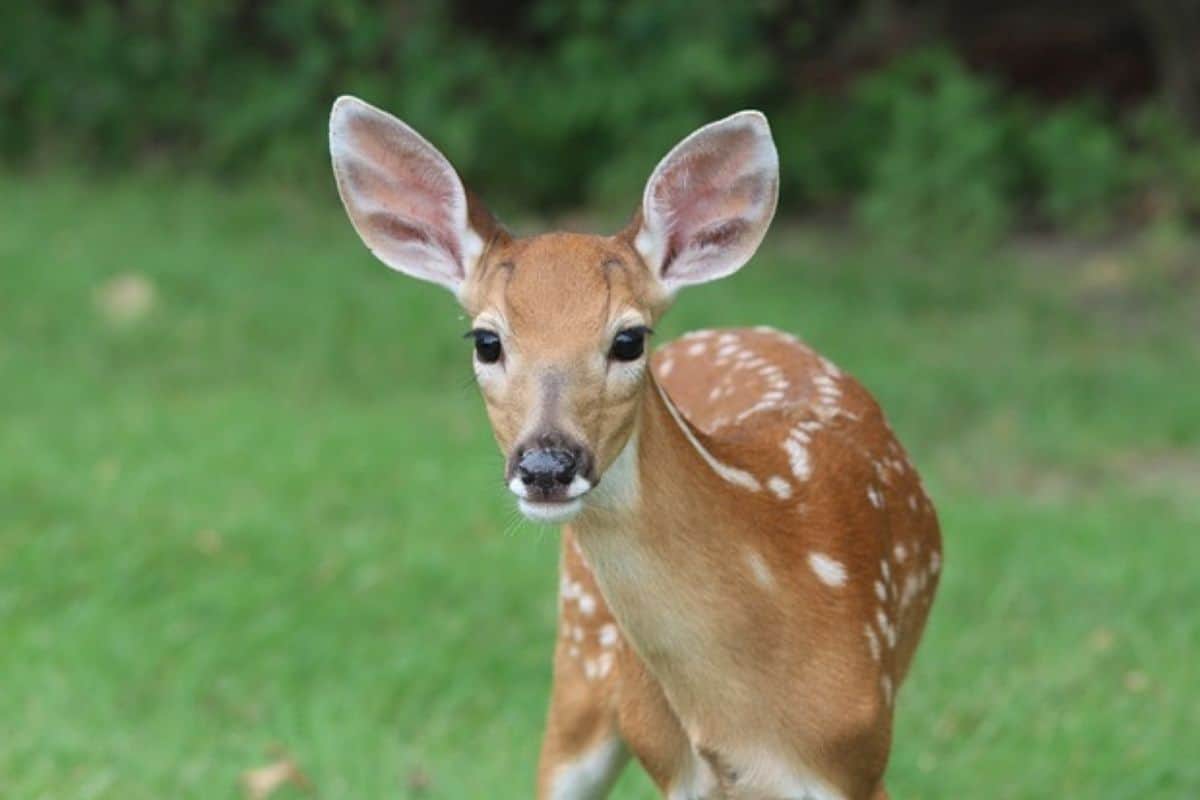 Baby deer are adorable animals, made even more popular with the cartoon Bambi. There are 43 different species of deer, including 6 in North America. You can find these highly adaptable animals in various habitats, including meadows, croplands, forested woodlots, and brushy areas.

Like most mammals, mother deers are especially protective of their babies. But that doesn’t mean the baby deer spend every moment of their young lives with their parents!

Learn more about 16 interesting facts about baby deer. Some may surprise you!

From newborn characteristics to how they survive in the wild, learn more about baby deer with these 16 facts.

Babies of deer are generally called fawn, which comes from the Old English word meaning glad. However, in some species of deer, such as elk and moose, their babies are called calves.

Newborn deer have only 4 teeth on their lower jaw. They will grow a complete set of adult teeth (around 32 teeth) by the time they reach 18 months. However, deer never grow front upper teeth and use their molars to grind and twist their food.

3. They drink milk for their first 2 weeks

One reason why baby deer don’t need many teeth at birth is that they survive on their mother’s milk for the first 2 weeks after being born. Then they begin to supplement their diet with forage, such as grass, leaves, and twigs. They are weened off their mother’s milk between 8 weeks to 6 months.

For the first week of their life, baby deer drink their mother’s milk around 4-5 times a day. Each nursing session is around 20-30 minutes. This slowly reduces to around 2-3 times per day after around 20 days.

5. Baby deer can be twins or triplets

When food is plentiful, deers are most likely to birth twins or even triplets. The rate of triplet fawns is between 15-20% among deers. That’s a much higher chance than humans! Typically, a one-year-old doe will give birth to one fawn. However, older does can give birth to two or three.

A set of twin baby deer isn’t always from the same father. Research has found around 25% of all twin sets have different fathers. There are even instances where triplets have come from three different bucks.

7. They are eight between 4-8 pounds at birth

Although they weigh only 4-8 pounds at birth, the baby deer’s weight will double in 2 weeks. They will weigh around 60-70 pounds by the winter. Single fawns will typically weigh more than those born as twins.

8. Baby deer can be left alone for hours in the wild

Sometimes mother deers will leave their babies unattended for hours while they go searching for food. Most of the time, the babies remain perfectly safe and should be left alone so the mother can return to claim them. The mother deer will rarely be further than 100 yards from their fawns.

You may also like:  Moose Vs Bear (How They're Different)

9. Their spotted coat helps them camouflage

The reason mother deer can leave their babies alone in the tall grasses or beneath bushes is because of their camouflage abilities. A baby deer’s light-colored, spotted coat makes it difficult for predators to see them in their hiding spots. Fawns have, on average, 300 white spots.

Within the first 10 days of being born, baby deers spend up to 95% of their time bedded. Fawn will lay down, hidden in tall grass or brush as if they are sleeping. However, they are still alert for predators and will occasionally move to new bedding sites.

Although predators, such as bobcats, bears, and coyotes cause many deaths among fawns, other factors can impact their survival rate. A study found that daily rainfall, birth weight, and mothering doe age are all contributors. For instance, the risk of death for a baby deer can double with 1 inch of rain in a day.

12. Newborns can walk within a few hours

Baby deer rely on their mobility to survive and they can start walking within a few hours of being born. They can stand and nurse within 30 minutes.

13. Even baby deer are fast runners

Although not as fast as adult deer, an average-sized fawn can run at speeds up to 20 mph, and smaller-sized babies are slightly faster. Their long tails act like rudders to guide them and prevent them from falling over when running. Even 3-week-old fawns can outrun most danger.

Fawns depend on their parents for survival in the first year of their life, traveling in groups of about 25 individuals called herds. However, the male fawns tend to go out on their own first at around 1 year old. In contrast, a female fawn will stay with their mothers until they are around 2.

Although some people say baby deer are odorless, they do have a unique scent that allows their mothers to identify them. However, their scent isn’t strong so they have protection from predators. One of the reasons is that mothers will lick away any urine or excrement the babies discharge while nursing.

Despite popular belief, handling a baby deer won’t cause the mother to abandon the deer. However, having the scent of humans on their bodies can attract predators. If you find a baby deer in the woods, it’s best to leave it alone since the mother is probably close by and will return to nurse their baby soon.

16. Baby deer are typically born in April or June

Baby deer are born around 6 months after their parent’s mate, which is typically from late May to June. Deer breeding season is usually from October to December, however for species that mate later their babies can be born in July or August.