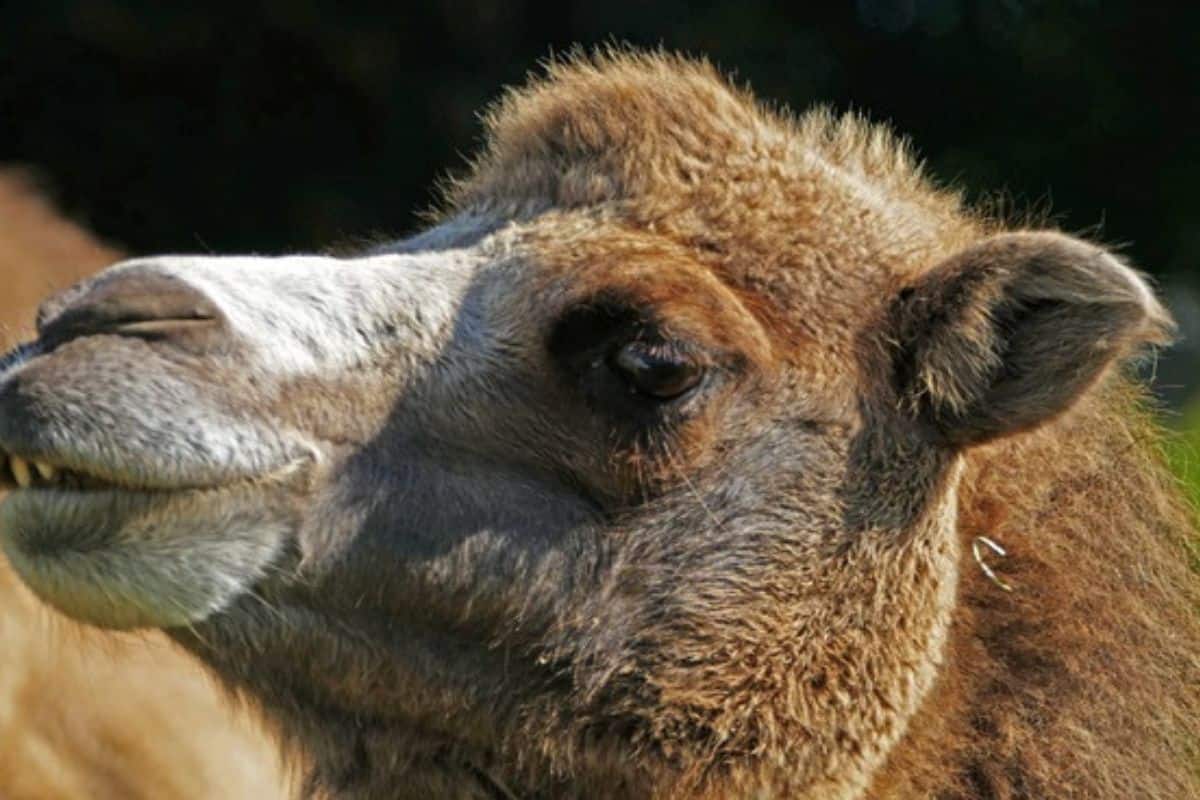 Camels are desert mammals native to Central Asia, North Africa, and the Middle East. There are two different species of camels. Dromedary camels have a single hump, while Bactrian camels have two humps.

These humps are used to store fat as extra energy when the camel may need it.  An adult camel can grow up to 7 feet tall at the hump. Camels are fairly fast animals, with top speeds of 40 miles per hour when sprinting and sustained speeds of about 25 miles per hour.

They live between 30 and 60 years. While all of this is impressive, one of the most notable qualities of camels is their long eyelashes. Camel’s eyelashes are for more than just looks. This article details a few interesting facts about these features.

Camels have three sets of eyelids. Two of these three eyelids have a set of eyelashes attached to them. These lashes are long, thick, and angled down. Unlike human eyelashes, camel’s eyelashes are almost parallel to their eyes.

Much like hair and nails, camel’s eyelashes are made of keratin. Keratin is a protective protein that is harder to scratch than other cells in the body. It is a protective feature found in the hooves, claws, beaks, scales, shells, and different parts of other animals. This protective substance is flexible, which allows the eyelashes to bend without breaking.

How long are camel eyelashes?

Camels have some of the longest eyelashes in the animal kingdom. A camel’s eyelashes are long and thick and can grow up to 2 inches in length. The eyelashes on the upper eyelid are longer and more coarse than those on the lower lid.

As mentioned above, a camel has three sets of eyelids. The third eyelid does not have eyelashes and provides an added layer of protection from the elements.

Compared to other mammals

A camel may have long, thick eyelashes, but how do they measure up to other mammals of the world? For comparison, a human’s eyelashes are typically only about .4 inches long.

Rabbits lose the contest, too, measuring up to .4 inches. A giraffe’s eyelashes, which are up to half an inch long, are longer than a human’s but still not as long as a camel’s.

Alternately, elephants are known to have the longest eyelashes in the world, measuring up to 5 inches, which is much longer than a camel’s lashes.

You may also like:  Are Black Bears Dangerous? (The Truth!)

What is the purpose of a camel’s eyelashes?

A camel’s eyelashes may be long and luxurious, but they aren’t just for looks. They serve a great purpose: protection. Camels live in sandy, desert areas, and others live in mountainous, snowy regions. In either case, their long, thick lashes protect them from flying sand and snow.

These lofty lashes also serve as protection from pesky bugs and small particles floating in the air. Pathogens, pollen, dander, dust, mites, and water droplets are all deterred by these useful features.

The damaging sun’s rays are another element that a camel’s lashes protect them from. The bright ultraviolet rays of the sun can impair the camel’s vision, but their long lashes provide shade, allowing them to see without difficulty.

If you have ever been in dry air, you may have felt the moisture in your eyes evaporate, leaving you with dry, uncomfortable eyes. Camels often live in dry, hot climates, and keeping the eyes moist is vital to eye health. Their long eyelashes keep the arid, hot wind from drying out the camel’s eyes. Without them, their eyes would dry out.

Camels are large, furry mammals that live in harsh climates. They have many features that help them survive in the snow and deserts, but their lashes are one of their most essential qualities.

Without their long, thick lashes, a camel’s eyes would be prone to debris and intense dehydration. The two lash layers keep their lashes safe and moist to ensure protection and optimal eye health.