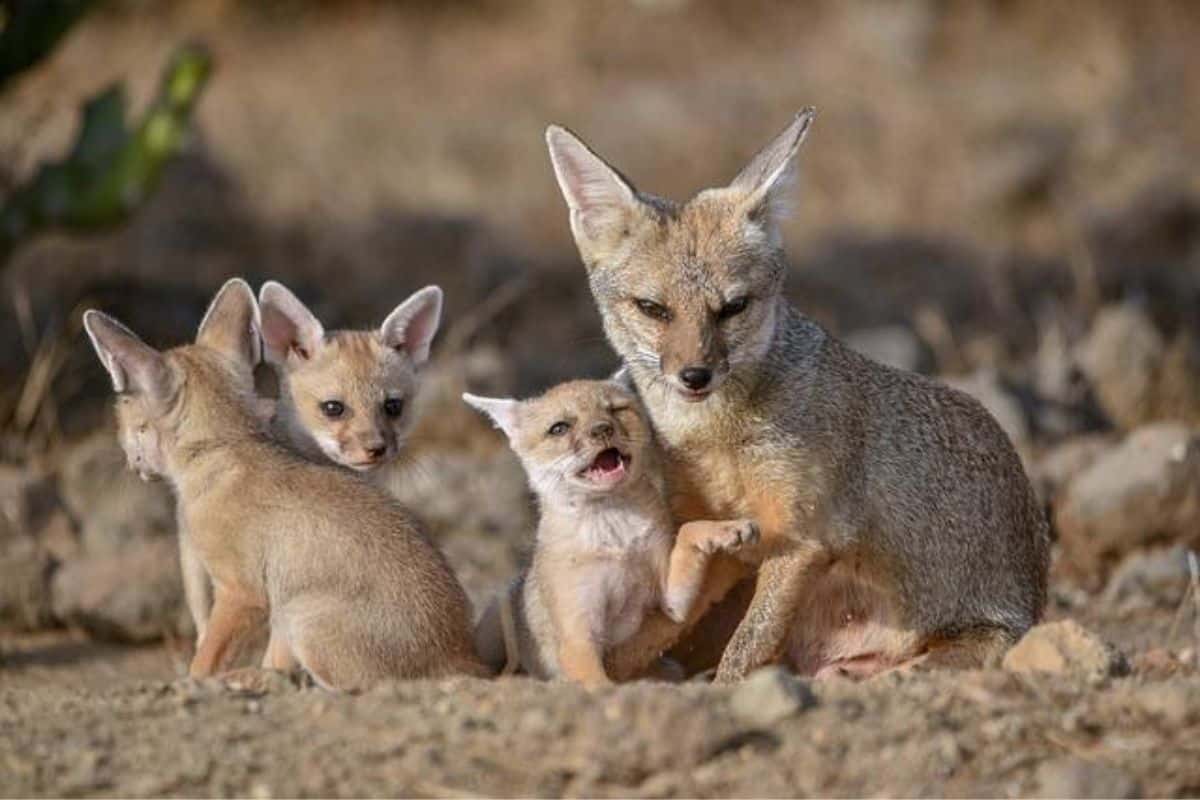 Foxes are members of the dog family, with over 30 different species living in various environments worldwide. You can find them in cities, forests, mountains, grasslands, deserts, and even the Arctic. One of the largest and most widespread species is the red fox, living in the Northern hemisphere and Australia. Like many mammal species, these small-sized, intelligent predators aren’t born ready to fight and hunt. Let’s find out what newborn foxes are like and interesting facts about baby foxes as they grow.

From what they can eat as newborns to how fast they grow up, here are 16 facts about baby foxes.

Baby foxes have a few different names, including kits, cubs, pups, and whelps. While they used to be most commonly called cubs, kits is a newer term that has grown in use. Once they get older, females are known as vixens and males as reynards, fox dogs, or tods. A group of foxes is called a leash or skulk.

2. Newborn foxes are around 4-inches long

Baby foxes are tiny when they are first born. They weigh around 0.25 pounds and are around 4-inches long. However, they grow very quickly and will triple in size in 1-2 weeks.

3. Foxes are born blind and deaf

When baby foxes are born they can’t see, hear, or walk and rely heavily on their mother to survive for the first three weeks. Their eyes don’t open until 9 days after they are born and their senses will start to develop after 2 weeks.

4. Baby foxes will molt their fur

At birth, baby foxes don’t have hair on their dark grey skin. They start to sprout fuzzy black fur at around 2 weeks and this fur molts, so a thick coat grows in its place. They will start looking like foxes, with longer snouts and pointed ears around 8 weeks old.

5. Baby foxes are born with no teeth

Besides their senses, baby foxes also don’t have teeth when they are born. Their first teeth, known as milk teeth, develop a few weeks after they are born. The rest of their baby teeth grow over several weeks for a total of 28 teeth. These baby teeth will eventually be replaced by 42 to 48 adult teeth, depending on the species.

Newborn foxes rely on their mother’s milk for nourishment for a few weeks. Then they will also eat regurgitated meat from their parents or siblings caring for them. Once they are old enough to stomach whole food, they will be brought small live prey, such as insects and mice.

Although foxes are often considered carnivores, they are actually omnivores. They will eat almost anything, including fruit and vegetables. However, they don’t eat grains.

Since baby foxes have small stomachs, they have to eat several small meals per day to stay full. When still feeding on their mother’s milk, they need to drink around 500 mL per day to grow healthy.

8. Baby foxes can forage for food after 12 weeks

After around 12 weeks, baby foxes will begin foraging for food themselves instead of relying on food brought back to them. This can be a dangerous time for many kits as they follow the adults and learn how to hunt, even though they typically start off foraging for insects and worms.

After 16 to 18 weeks, the surviving cubs have developed the necessary hunting skills. While they still stay close to the safety of the den during this time, in several months, they will start exploring larger areas or venture away from home.

9. Most foxes are born in the spring

Foxes typically breed in the winter months and have their babies in the spring after a gestation period of around 52 days. For the northern hemisphere, most foxes are born in March or April, and for the southern hemisphere, in September.

10. Baby foxes are born in dens

Many fox species will dig simple, roomy dens before their babies are born. Young kits can be seen coming out of the dens around 3-4 weeks. They live in these dens for up to 3 months while the family stays close by to protect and take care of them. Sometimes kits are moved to different dens during the rearing process.

11. Foxes are born in litters of multiple babies

Although there are instances where a female will birth only one kit, they typically have litters of 3 to 7 kits. Sometimes litters can even be up to 11 kits. Foxes need to have multiple babies in a litter since less than half of all foxes make it through their first year.

12. Baby foxes mature after one year

Although humans are considered babies or toddlers for years, foxes grow very fast. After 6 months they look more like adult foxes than kits and are no longer considered babies after one year. They can leave their parents once they can feed themselves efficiently and will breed during the winter months.

13. Some stay with their parents for life

Sometimes kits will stay with their parents for life, becoming subordinate to their parents in the family unit. They help raise the next generation of foxes without producing any offspring themselves. Other foxes will mature and leave to form their own family units after around 10 to 18 months.

14. Only the dominant female fox in a group will have babies

Although some species tend to live in pairs, foxes will also live in small family groups. In a group with multiple vixens, the dominant male will only mate with the dominant female. This means that only one fox will give birth even though the entire family group helps raise the babies.

15. Young foxes are playful and active

Although during the first couple of weeks baby foxes huddle together to stay warm and aren’t as active, they grow up to be very playful. These intelligent animals are full of energy and curiosity. You can often see them investigating their surroundings or play-fighting and rolling around with siblings. Playing helps them develop basic skills necessary for survival and hunting.

One of the most distinct sounds among the 20 different calls foxes make is gekkering. It’s a chuckling type of noise that you’ll hear a litter of kits making as they play-fight. Its a sound foxes make when they are nervous or excited. Other sounds baby foxes make are smacking, whimpering, and peeping.