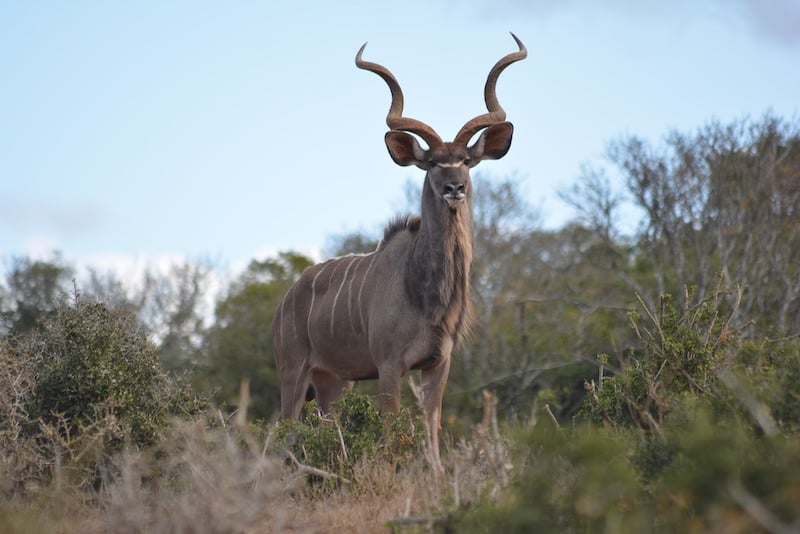 Animals have a wide variety of uses for horns, usually for defending themselves from predators and fighting members of their own species for territory, dominance, or mating priority. They’re typically present only in males, but in some cases the females have them too, primarily for protection rather than mating shows. Here’s a list of some animals with curly horns that are especially notable and impressive, along with fun facts and photos to best appreciate them and their majestic horns.

13 examples of animals with curly horns

Asian Water Buffalo Horns: This water buffalo has horns that can spread up to an average of three feet, but one Buffalo found in 1955 had horns that measured 13 feet long!

The Asian Water Buffalo, aka Domestic Water Buffalo, is a large bovid that originated in the Indian subcontinent, Southeast Asia, and China, but it’s currently found throughout the world. More people depend on them than any other domestic animal, as they’re responsible for tilling the thick mud of rice fields and their milk is richer in fat and protein than that of dairy cattle.

Their meat is a source of food and revenue, their tough hides can be used to make leather products and shoes, and even their horns are used to make jewelry, combs or instruments.

“River buffaloes” like to stand in deep water up to their necks, while “Swamp buffaloes” prefer to lay in mud, getting a thick coating on their body. Spending so much time in water and mud is how these large animals stay cool, and is how they’ve adapted so well to a hot and humid climate.

Scientific name: Taurotragus derbianus
Size: up to 1400 lbs and 8.3 ft in length

The Giant Eland is native to the open forests and savannah of central Africa, and is the biggest antelope in the world. Their horns are actually primarily used to loosen soil in search of mineral lick sites while out grazing on grasses, foliage, and branches. To adapt to the heat of the day, this ungulate is primarily nocturnal while during the day they rest in sheltered areas.

This animal is very alert and wary; They can reach speeds of up to 43 miles per hour with their main predators being the lion and the spotted hyena.

Sable Antelope horns: Both sexes have ringed horns that arch backwards, with the female horns reaching about three feet in length while the male’s can grow to be 5 feet!

The Sable Antelope is an antelope that inhabits the wooded savannah in East and Southern Africa. To get essential minerals, this species will visit salt licks, but they’ve also been known to chew on discarded bones for additional calcium. They are more active in morning and evening, when temperatures are slightly cooler.

When they’re threatened by a predator, including a lion, they’ll confront them head on and use their scimitar-shaped horns as weapons – many big cat fatalities are due to these fights. A single male will lead a herd of females and calves. Males use their huge horns to fight each other, and often drop to their knees in head to head combat.

Impala horns: Only male Impala have the lyre-shaped, ringed horns that can grow from 1.5 to 3 feet long.

An impala is a medium-sized antelope that looks like a mix between a goat and a deer. They don’t grow especially large, only coming up to the chest of an average sized adult man at 3.5 feet, but they have long spiraling horns that add up to three more feet.

These antelope are native to Africa, ranging form Angola to South Africa, living in woodlands with little undergrowth and low to medium high grassland.  The males can be territorial and herd the females together during the mating season, and use their horns during mating season when fighting over mates.

To evade and sometimes confuse predators, impalas can perform a series of impressive leaps and kicks. They can jump nearly ten feet high, covering a distance of 33 ft.

Capra Ibex horns: Both male and female Ibex have long horns that curve backwards, with the male horns measuring 3 feet in length and the females being slightly smaller and slimmer.

This is a species of wild goat that lives in the mountains of the European Alps. Their majestic horns are used to defend themselves against predators as well as for when males fight for access to females, usually using their horns to butt heads and crash into one another.

They spend the majority of their time in the rocky terrain of high mountainous ranges, and they’re very good at climbing the steep slopes in search of alpine grasses and shrubs.

The Alpine ibex, once widespread, was hunted to extinction in Switzerland, Germany, Austria and northern Italy. Protection for the ibex began in the early 20th century and their populations are recovering.

Hebredean Sheep horns: This breed of sheep has a wide variety of horns. They sometimes have none, but can typically have one pair, two pairs, or even more!  Horns can grow up to 2.5 feet long and can contain up to 1.25 spirals.

The Hebridean Sheep is considered to be an “Ancient Breed” from Scotland, and is relatively small and fine boned compared to other sheep, and have black or dark brown wool. Their wool and fleece are very effective at deflecting water from the humid environment.

A hardy breed, they can do well grazing on vegetation that would be considered too “low quality” for other sheep. The ram’s horns are used during the mating season, but female’s horns are much more delicate and will oftentimes break, but regrow well.

Scientific name: Ovis orientalis orientalis
Size: 110 lbs for males, 77 lbs for females with a shoulder heigh of about 3 feet

Mouflon Horns: The Mouflon has curved horns that reach about 3 feet long, with all males and some females possessing them.

You may also like:  14 Examples of Detritivores (With Pictures)

The Mouflon is thought to be the early ancestor of our modern, domesticated sheep. They’re native inhabitants to the Caucasus, northern and eastern Iraq, and northwestern Iran.

The horns of mature rams are curved and nearly complete a full revolution, and are used during fights. The males will fight each other for dominance, both in securing their hierarchy in the group and for the ability to mate with females.

Markhor Horns: The Markhor’s horns are spectacular corkscrewed horns, which are capable of growing to more than 5 feet long!

The Markhor is a large species of wild goat, also natively known as the Shakhawat, potentially from the Persian word for snake. This could be because of the large, coiled horns, but also for their uncanny ability to kill snakes that threaten them.

In India, it’s illegal to hunt this animal, but it’s still endangered and poached for food and for its horns. They’re very well adapted to mountainous terrains, with their mating season taking place in winter.

During this time, the males will fight each other by lunging, locking horns, and attempting to push each other off balance. Females have short hair while males have long, mane-like hair on the chin and chest.

Addax Horns: The Addax’s horns are long and twisted, typically 2.5-3 feet in length in both males and females, and contain two or three twists in their shape with the mid portions of the horns marked with a series of 30-35 ring-shaped ridges.

The Addax is a white endangered antelope that inhabits the Sahara desert. They prefer to live in smaller groups of only 3 to 5 animals, primarily roaming and feeding on desert grasses and small bushes. They’re part of a matriarchal society, with the oldest female being the herd’s leader.

Due to its slow movements, it makes for an easy target for the predators of the savannah, such as lions and leopards, so they’ve adapted to being primarily nocturnal and are capable of getting all of its moisture required from its food and dew that condenses on plants.

Blackbuck Horns: Only male Blackbuck have long, spiraling horns that can measure a little over 2 feet long with a corkscrew spiral and are in a V shape.

This animal is the only living species of the genus Antilope, distantly related to antelopes, and lives on the Indian subcontinent. They generally live on open plains and woodlands in herds ranging from 5 to 50 members, usually containing only one dominant male – this male is noticeably larger than that of the females.

They can reach speeds of more than 50 miles per hour, with wolves being their main predator. Their main reason for movement is in search of water, and they’ll travel long distances in search of it. Males use their horns to actively defend resources in their territories, which are clearly marked with scent.

In 1932 they were introduced to the Edwards Plateau in Texas, where a population still exists today. They have also been introduced to Argentina.

Oryx Horns: Both the male and female Oryx have horns, which are long, thin, symmetrical, and can reach up to 3 feet on both sexes. Named after the scimitar sword with it’s long and slightly curved blade.

The Scimitar Oryx, also known as the Sahara Oryx, is a species that’s now extinct in the wild, but flourishes in captivity and can thankfully still be seen today. It was one of the largest antelope species native to Africa, and they used their long and sharp horns to defend against predators.

It was once widespread across the northern part of the continent, but was eventually overhunted for its gorgeous horns – it’s believed that the unicorn myth originated from sightings of a Scimitar Oryx with a broken horn (once broken, their horns cannot regrow). Like many ungulates, they use their horns to dig in the loose soil to get to mineral licks required for their diet.

Bighorn sheep horns: The males possess large horns that curve back then rotate around with the ends facing forward. A pair of male horns can weigh up to 30 pounds! The females also have horns but they are smaller, shorter, and less curved.

Bighorn sheep are native to the western parts of North America. In the United States they are found mainly in the Rocky Mountains, Sierra Nevada, and desert regions in the southwest. Their main predators are bears, wolves and mountain lions. They are also very sensitive to infectious diseases that can be spread by domestic sheep.

During mating season, males use their horns to fight for dominance and rights to females. Almost like a cowboy duel, they will walk away from each other, then turn around and run straight at each other and violently headbutt, crashing their horns together. Their skulls have special adaptations to survive these crushing blows.

Kudu horns: The males of both greater and lesser varieties have long horns that point up from their head in a V shape, and curl like a corkscrew.

Kudu can be found in southern and eastern Africa. They prefer to run from threats but will fight if necessary, often kicking with their strong legs or ramming predators with the base of their horns. Natural predators of the kudu are lions, leopards and hyenas.

They prefer to spend their time in scrubland, bushland and thickets than out in the open where they are more vulnerable to these predators. Kudu are also hunted by man for their meat and hides. Their horns are sometimes used as musical instruments.