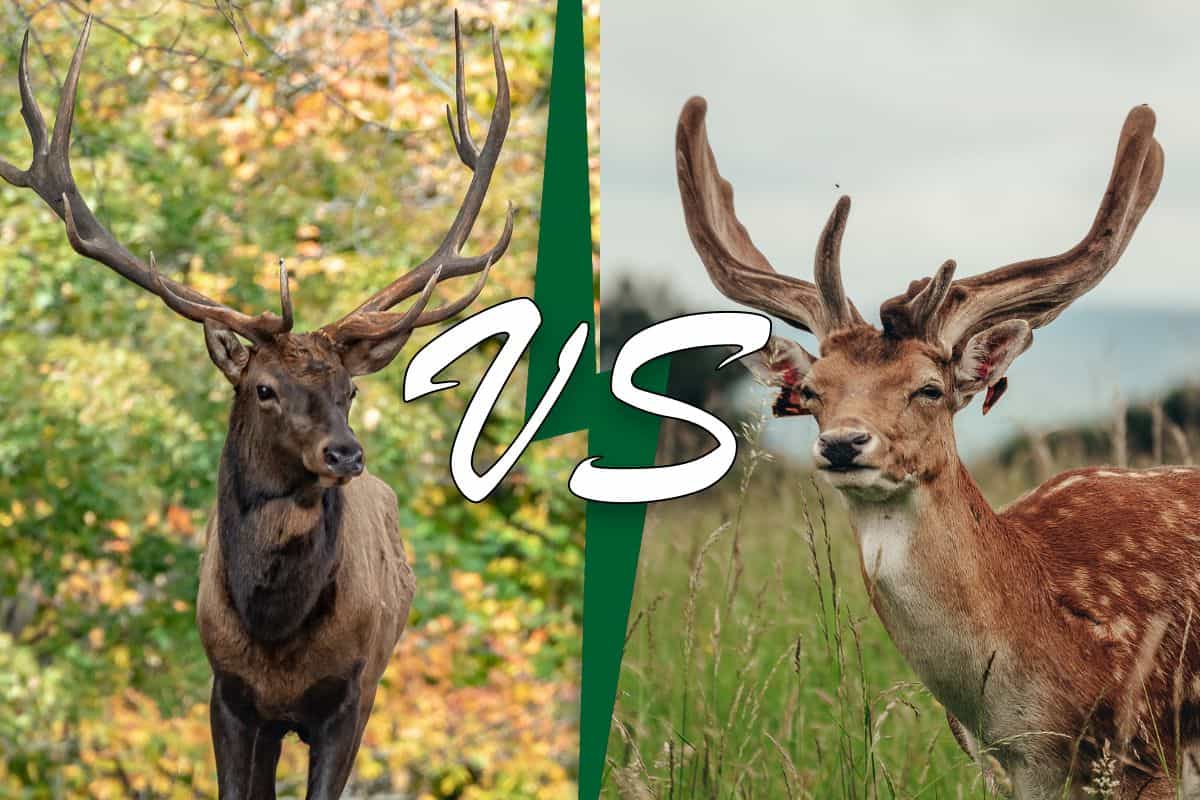 Elk and moose are the two largest members of the deer family. They are both native to North America, and both have long been prized by hunters for their meat, antlers, and hides. However, these two iconic animals differ in several ways. This article will compare the elk vs moose, and highlight 11 of the most notable differences. First though, let’s describe each of these mammals a bit more.

What Is an Elk?

Elks are large, hoofed mammals closely related to deer. They are found in North America, Europe, and Asia and typically inhabit forested areas. Elks are herbivores, and their diet consists mostly of grasses and leaves.

They can also munch on shrubs and twigs from time to time. Elks have a reddish-brown coat with a lighter-coloured rump. Male elks also have enormous antlers that they use for fighting during the mating season.

Females usually only have small bumps on their heads where the antlers would be. Elks are social animals and often live in herds. However, males and females will only stay together during the mating season.

The rest of the year, the males live in bachelor herds while the females and their young live in separate packs.

What Is a Moose?

Moose are the largest member of the deer family and can be found throughout North America, Europe, and Asia. Moose typically inhabit forested areas near bodies of water, as they are excellent swimmers. Moose are herbivores; their diet consists mostly of leaves, twigs, and buds.

They also eat aquatic plants and will wade into ponds and lakes to eat the underwater vegetation. Moose have long legs and a humped back, which helps them to move easily through deep snow.

They have thick brown fur and shed their coat yearly in the spring. Males (bulls) are larger than females (cows) and have large antlers that they use to attract mates and defend their territory.

You may also like:  Why Do Squirrels Chase Each Other? (6 Reasons)

One of the most noticeable differences between elk and moose is their size; elk are significantly smaller than moose, weighing around 450-700 pounds, while moose can weigh upwards of 1500 pounds. Moose are the largest member of the deer family, while elk are more closely related to goats and sheep.

Another notable difference between these two animals is their weight; elk tend to be very lean, while moose are much more heavyset. This difference is due to their different diets; elk mainly eat grasses and other plants, while moose prefer twigs, bark, and other woody vegetation. Though they may look similar at first glance, there are several significant differences between these two animals.

Both male and female elk and moose grow antlers. However, bull elk have much larger antlers than bull moose, which can span up to four feet long. Moose antlers are much larger than elk and typically grow to be about 6 feet long.

The primary purpose of antlers is to attract mates and establish dominance within the herd.

Moose have longer legs than elk, which helps them wade through deep snowdrifts more easily. On the other hand, elk have shorter legs that are more suited for running at high speeds. Their legs come in handy when they are being hunted by predators such as wolves and bears.

Additionally, moose have wider and more rounded hooves than elk ones. Elk hooves are narrower and sharper, which helps them grip steep terrain better.

Both animals have long, tapered tails that they use for balance while running. However, there are some notable differences between the two tails. Moose have shorter tails that barely reach their hocks, and they are mostly black in colour, while elk have longer tails that are dark brown with a white underside.

The shorter tail of the moose makes it easier for them to maneuver through thick brush and deep snow.

Another difference between these two species is their fur coats. Moose have darker, more coarse fur, while elk have lighter fur that’s softer to the touch. Additionally, moose have a thick mane of neck hair that they use to help ward off biting insects, while elk do not have this mane.

These two animals also tend to inhabit different habitats. Moose prefer wetter areas like marshes and bogs, with forests close by, while elk prefer drier habitats like open meadows or forests with plenty of trees for cover, such as aspen and coniferous forests.

The range of these two animals also differs somewhat. Moose live in cold, snowy climates, and they’re found throughout most of Canada and Alaska as well as parts of the northern contiguous United States.

On the other hand, elk are found primarily in the western half of North America, from British Columbia down through Mexico into Central America. You can find elks in prairies, the rain forests along the Pacific coast, aspen parklands, and the Rocky Mountains.

One final difference between these two species has to do with their breeding habits. Male moose tend to be very aggressive during the rutting season, often fighting each other for mating rights.

Elk, on the other hand, form harems where one dominant male will mate with several females. Females of both species typically give birth to one or two offspring at a time.

The diets of these two animals also differ somewhat. Moose largely subsist on aquatic plant life, such as lily pads and sedges. They will also eat twigs, buds, and leaves from shrubs and trees.

Elk, on the other hand, primarily eat grasses and herbs. They also eat some shrubs and trees, but not as much as moose.

Finally, there are some notable differences in the behavior of these two animals. Moose tend to be relatively solitary creatures, while elk often form large herds. Additionally, moose tend to be less afraid of humans than elk, which can sometimes make them dangerous if they feel threatened.