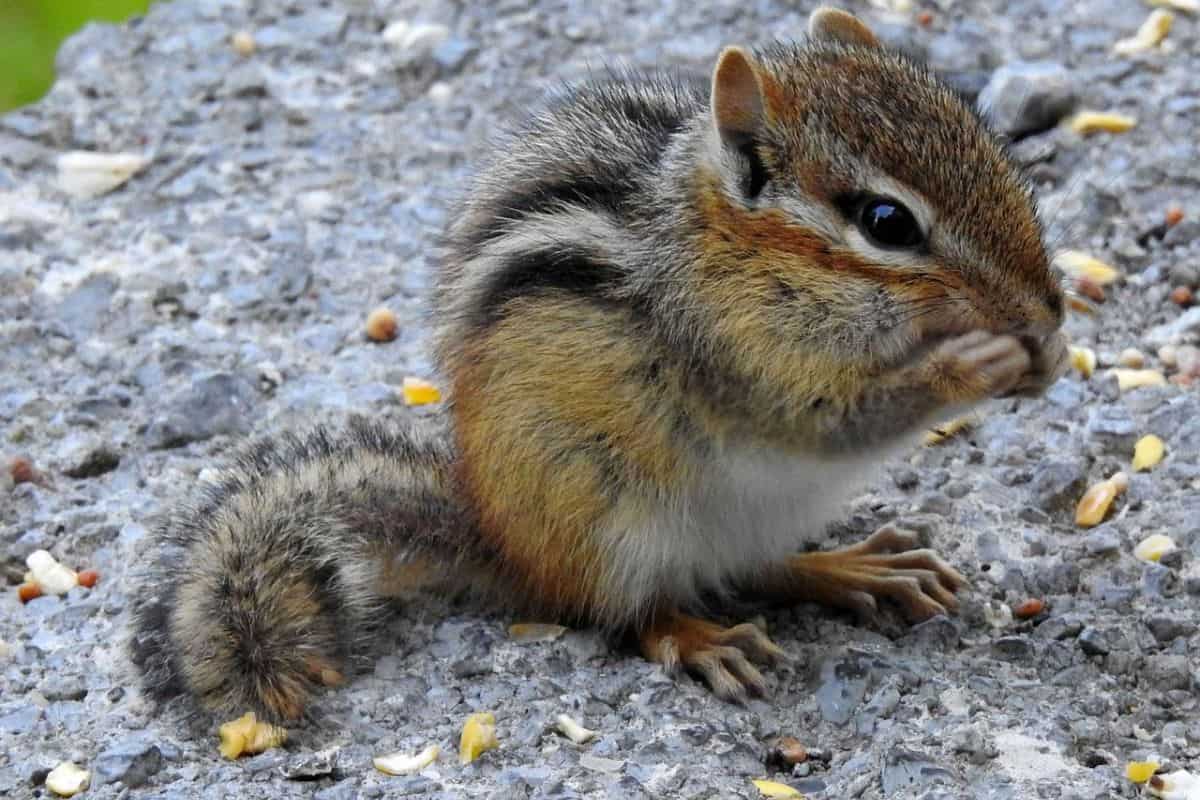 There are 25 species of chipmunk, and all but one of these species can be found in North America. Two of the most commonly seen species are the eastern chipmunk and the least chipmunk. As chipmunks, these creatures definitely have a lot in common, but that doesn’t mean they’re identical. Read on as we compare the eastern chipmunk vs the least chipmunk.

Eastern chipmunks have reddish-brown fur and dark brown and light brown stripes that run down their bodies. Least chipmunks can have gray or reddish brown fur, with white and cream colored strips across their backs. It might be hard to tell these animals apart at first glance, but there are plenty of differences that help set them apart.

One of the most notable differences between eastern and least chipmunks is their size. True to its name, the least chipmunk is the smallest species of chipmunk. It usually has a total length of 6.2 to 9.8 inches, with an average weight between 0.88 and 2.33 oz. Females are often bigger than males are.

The eastern chipmunk may be a small rodent, but it’s actually the largest chipmunk species! If you include its tail, it can grow to be up to 12 inches long. These chipmunks typically weigh somewhere between 2.3 and 5.3 oz.

2. Eastern Chipmunks Are Distinct from All Other Chipmunks

Every species of chipmunk has traits that make it stand out, but the eastern chipmunk is especially unique. While it is a chipmunk, it’s a part of a subgenus called tamias. This subgenus once included other chipmunk species, but they have since gone extinct, making the eastern chipmunk the only living member of the group.

Being the smallest chipmunk species isn’t easy. Because of their small stature, the least chipmunk is often driven away from food resources by other, larger chipmunks. Since chipmunks need to store food for winter, it’s important for least chipmunks to find homes where they aren’t under threat.

4. Eastern Chipmunks Can Be Carriers for Botflies!

Botflies are a type of fly that is frequently mistaken for a bee. These flies deposit their eggs in the skin of larger animals.

Botfly larvae are parasites that feed off their hosts. Unfortunately, these parasites can be a real problem for the eastern chipmunk.

When botfly larvae are growing under a chipmunk’s skin, it can lead to an infection. If the chipmunk isn’t treated, this infection can potentially be painful. Eastern chipmunks can also spread larvae to humans, which is why it’s important to wear gloves whenever you’re handling wild animals!

Most chipmunks prefer to live in wooded areas, but the least chipmunk is happier in areas that are more open. It’s especially common to see this rodent living around the edges of forests. You can also spot these chipmunks living along river bluffs and rock cliffs!

You may also like:  Do Ultrasonic Deer Repellers Work?

Eastern chipmunks usually look for tree-filled habitats that have lots of shrubs and log piles. With that said, you can sometimes spot both types of chipmunks in urban parks.

The least chipmunk usually has one litter a year, like most chipmunks do. They typically mate between March and May and give birth after about one month. Eastern chipmunks, on the other hand, breed twice a year: once in early spring and a second time in July.

An eastern chipmunk litter usually has between two and eight babies, which are called pups. Least chipmunk litters are similar in size, with three to seven pups being born per year. Both chipmunk species reach sexual maturity after about one year.

7. They Have Different Lifespans

Unsurprisingly, both species have much longer lifespans when they’re kept in captivity. Eastern chipmunks can live for as long as 11 years! While the least chipmunk has a shorter lifespan in comparison, it can still live for more than 7 years when it’s cared for by humans.

The eastern chipmunk will quickly respond to animals that get close to its burrow. These animals are extremely vocal and will threaten or chase away potential intruders, like other chipmunks. In addition to protecting their burrows, these animals work to protect their food stores from other hungry chipmunks.

9. They Live In Different Parts of North America

It’s not unusual for the least chipmunk to be chased away from its home by predators, chipmunks, and other animals. Relocating may be frustrating, but this behavior has helped this species of chipmunk spread across the continent, making it the most widespread chipmunk in all of North America. It can be found in Canada, the western United States, and the Midwest.

The eastern chipmunk lives in the Northeast region of the United States and in Southeastern Canada. It’s the only type of chipmunk found in Maryland and is one of the most commonly seen chipmunks in Vermont. These chipmunks can sometimes be spotted as far south as Florida.

A trill is a high-pitched call that fleeing chipmunks use to alert other chipmunks of a nearby predator. Chips are a series of notes that can last for several minutes.

You may also like:  Are Groundhogs Nocturnal Or Diurnal?

Eastern chipmunks make chuck sounds when they’re elevated. These noises sound a little like an axe does when it strikes wood!

While the eastern and least chipmunks are both omnivores, the bulk of the least chipmunk’s diet is plant material. It typically feeds on nuts, seeds, and berries. If they don’t have access to other food sources, they will sometimes eat insects.

Since the eastern chipmunk is bigger, it’s able to eat a wider variety of foods. In addition to seeds, berries, and fruits, these chipmunks love to munch on mushrooms, insects, worms, and bird eggs. They also eat frogs and snails, and they occasionally munch on other small mammals, like mice.