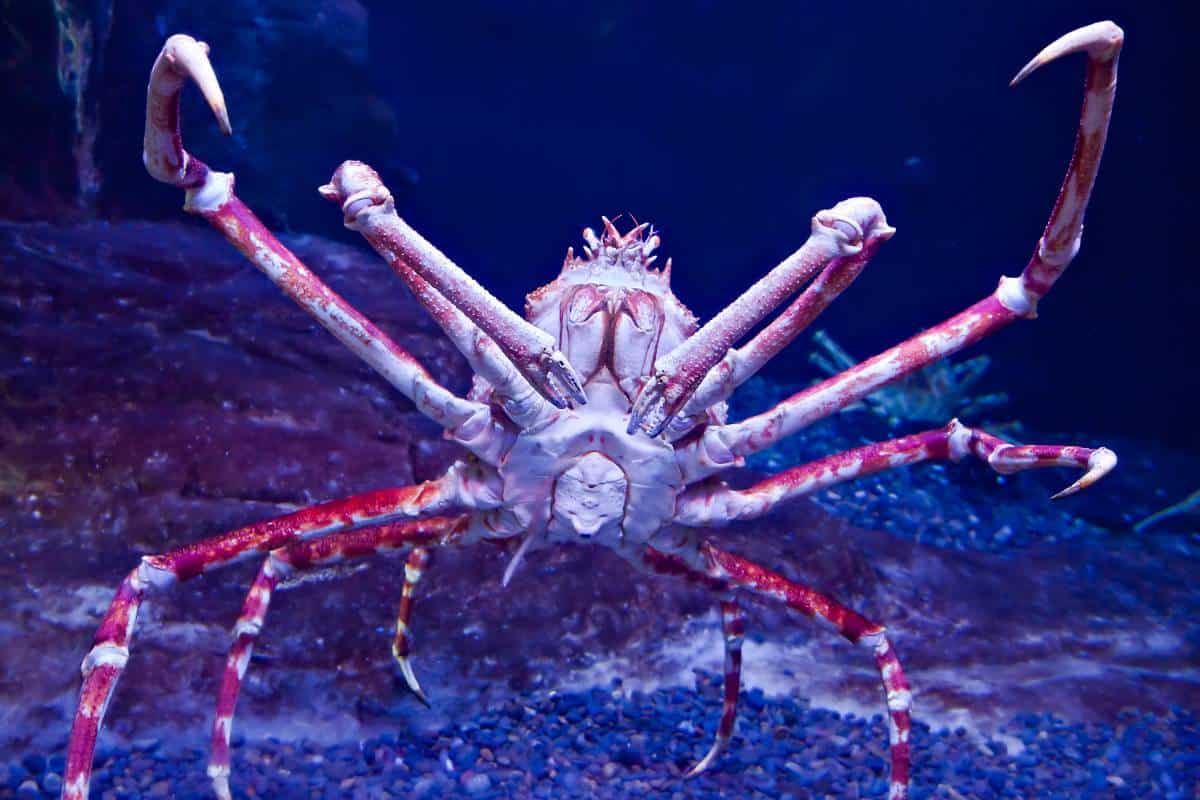 Japanese spider crabs are impressive creatures that feature long, spider-like legs, which is how this crab got its name. These unusual-looking invertebrates are native to the deep sea portions of Japan’s Pacific coast, and are found in various ranges of depths, from 164 feet to as deep as 1,640 feet. Keep reading to learn more interesting facts about Japanese spider crabs.

Despite its somewhat scary appearance, the Japanese spider crab is not considered a danger to humans. Unfortunately, years of myths and lore about these gentle giants dragging fishermen into the depths of the ocean has given these creatures a bad rap. The truth is, Japanese spider crabs are no more harmful than any other crab species and they are actually extremely fascinating deep sea animals.

1. They Are The Largest Crab

2. They Are Not Hunters

Even though these creatures look rather menacing, they are slow moving and calm. Japanese spider crabs are not hunters and do not actively stalk or hunt other animals. They are, however, scavengers who will scour the floor of the ocean looking for plants and dead animals to feast on.

3. They Live For A Long Time

4. They Can Regenerate Their Legs

It is a sad fact that these long-legged crabs can sometimes get their legs torn off if they are attacked by predators or caught in a fishing net. The good news is that they have the ability to regrow their limbs via a molting cycle. Additionally, Japanese spider crabs can live even if they are missing as many as three legs!

5. Their Carapace Stays The Same Size

The carapace is the hard upper shell of crabs that acts as a protective shield, protecting the animal’s cephalothorax. When the Japanese spider crab becomes an adult, its carapace no longer grows and instead stays that same size for the rest of the crab’s life. Its legs, however, will continue to grow.

6. The Female Japanese Spider Crab Can Lay Over 1 Million Eggs

Every season, the female of the species can lay 1.5 million eggs. Their mating season lasts from January to April.

Despite laying this overabundance of eggs, only a few will actually survive long enough to hatch. If the eggs are lucky enough to survive, they will hatch about 10 days after being laid.

The aprons that these crabs have are not the same ones that you would wear while baking in the kitchen. Their aprons are where the female of the species carries their eggs once they become fertilized by the male spider crab.

You may also like:  How Strong Are Baboons? (Comparisons)

8. They Swim To Shallow Waters To Mate And Spawn

Japanese spider crabs are deep sea creatures who are found in waters as deep as 2,000 feet. They will migrate to waters much shallower and warmer during their mating and spawning period.

Once the eggs hatch, the young crabs will stay in this area until they start to reach adulthood. At this time, they will move down into the deeper depths of the ocean.

Before the Japanese spider crab grows into an adult, it goes through a larval stage, which occurs after hatching. During this time, the baby spider crab looks nothing like the adults of the species.

It is instead transparent and legless. The larval stage can last from 30 to 60 days.

10. They Don’t Have Many Predators

Their massive size and tough shell is enough to keep many of the most common ocean predators at bay, but that doesn’t mean that they are safe from attacks. The most common predators of the Japanese spider crab are octopi and fishing nets. These crabs are most vulnerable after they molt, since their shells haven’t hardened at that time.

11. They Are Not Endangered, Yet

Even though Japanese spider crabs are not listed as an endangered species, that doesn’t mean they won’t be in the near future. These animals are considered a delicacy in Japan.

This, along with rising ocean temperatures and exploitation of their natural environment, has caused the number of Japanese spider crabs to steadily decrease over the past several years. Various conservation groups are working to ensure that this species does not ever find itself on the list.