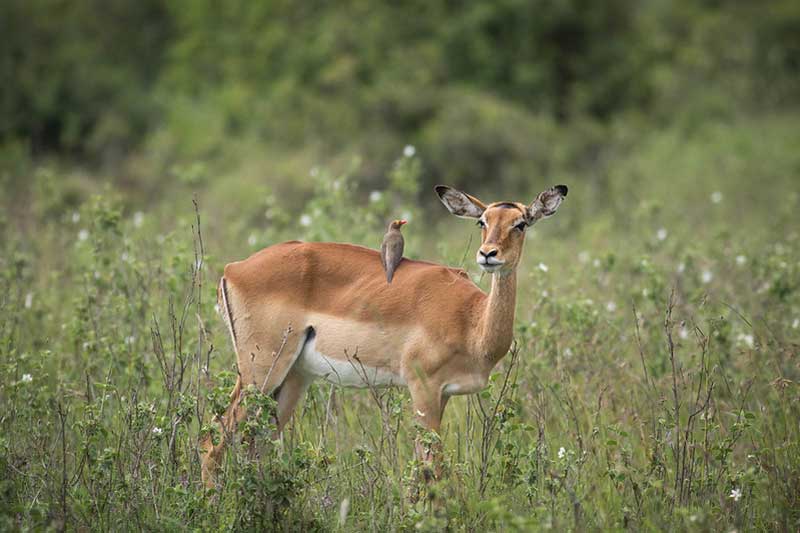 While nature tends to be a dog-eat-dog world, there are several species of animals that benefit from each other’s presence. Animals in symbiotic relationships provide services to each other that make them indispensable to the other species. The most common form of symbiosis between animals is for the smaller animal to remove pests or clean the larger animal while the larger animal provides protection or food.

In this article, we will be looking at 5 pairs of animals with symbiotic relationships and how they help each other thrive.

The symbiotic relationship between Oxpeckers and large African ruminants like the black rhinoceros has historically been documented as one of mutual benefit. It is thought that the oxpeckers remove ticks and other parasitic bugs from the large mammals. They also can often alert the animals to threats of predation by flying upward and making lots of noise.

However, recent research seems to point to a different relationship entirely and it’s one that might not be as symbiotic as we originally thought. While the oxpeckers do eat ticks and parasites, they also feed on the blood of their host animals. This was once thought to be anecdotal to help prevent infections. Now though, it’s believed that blood may be the preferred food of the oxpecker and that their feeding habits prolong healing.

It’s impossible to say which train of thought is accurate without more intense studies. Such as the use of control groups to see if the oxpecker do in fact reduce the tick load on their hosts or if blood is their main attractant.

Cows and cattle egrets have a more subtle relationship than that of the rhino and the oxpecker. Insects like flies are attracted to the feces of cows and cows frequently stir up insects and small invertebrates as they walk. This has caused the cattle egret to follow and walk amongst the cows feeding on any insects they see.

Having their own personal bug brigade helps the cows immensely. Many species of flies and biting insects often pester them and can cause infections in their eyes, noses, and any wounds they have. The only defense the cows naturally have against these bugs is their small tails, so the egrets are a very welcome aid.

Remora fish are usually about 1-3 feet long and they have evolved to have a suction cup-like organ on the top of their head. This organ allows remora fish to attach themselves to the sides and bellies of sharks.

Once attached, remoras feed on parasites as well as pieces of any prey items that the shark may miss. This behavior keeps the sharks clean and keeps them safe from any bacterial infections or unhealthy organisms from growing on the shark.

In addition to a shark buffet, the remoras also get transportation around the ocean and safety from predators. While most shark species will go out of their way to engage with remoras, lemon sharks and sandbar sharks prefer to live life without them. These sharks will even go as far as eating the remora fish if they get too close.

You may also like:  11 Examples of Animals That Spit (with Pictures)

One of the least expected and most domestic symbiotic relationships on the list is between a tarantula and a frog.

If you have ever kept a tarantula as a pet, you know that while these animals can be fierce predators, they are also a bit dramatic at times. Tarantulas molt fairly regularly until adulthood and directly after a molt their bodies are soft and at risk of damage from insects like ants.

Colombian lesserback tarantulas have found an answer to this danger by keeping small frogs in their burrows. The dotted humming frog feeds on small insects like ants, keeping both the tarantula and its eggs safe from predation.

What’s super cool about this relationship is that these tarantulas are known to feed on other frog species. They will often grab a frog and look it over. If it is a dotted humming frog, they will place it in their burrow and keep it, if it’s a different species they will eat it.

Ants and other insects are often attracted to the leftovers from the tarantula’s kill and the frogs are quick to take care of these pests. It’s the perfect symbiotic relationship!

Nile crocodiles are known to be one of the largest and most aggressive species of crocodilians on the planet. These crocodiles can reach up to 20 feet in length and weigh up to 1600 pounds.

They are opportunistic feeders lying in wait for their prey to get close enough for them to launch out of the water and strike. They are also very territorial and aggressive to other crocs and humans. Sadly, over 300 human deaths a year are linked to these cranky crocs.

With this cantankerous reputation, you wouldn’t expect to see these animals on a symbiotic animal list, but they seem to have a soft spot for their avian dentists, the Egyptian plover. These birds share their habitat with the Nile crocodile, where they are frequently seen running to and fro catching any insects in their path.

In addition to insects, the Egyptian Plover is also known to walk into the open mouths of Nile crocodiles and clean the meat from on and between their teeth. This behavior keeps the crocodile’s mouth clean and free from infections and it gives the plover a boost to its normal diet.

I’m not sure how this symbiotic relationship was originally formed, but the first plover to walk into the mouth of a crocodile must have been either very brave or very reckless.