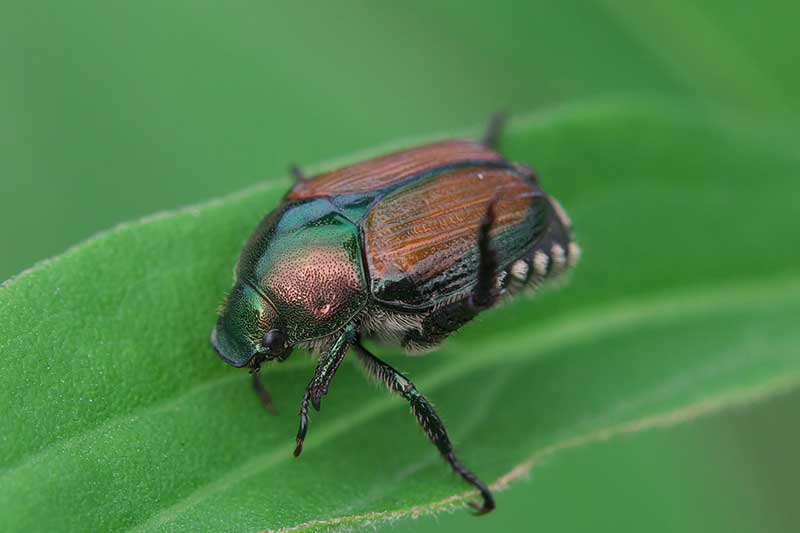 Some animals help humans or are friendly pets, while others can cause issues. For instance, there is a group of insects that destroy crops on farmland or in gardens. They feast on plants we usually cook with or that supply our grocery stores.

Farmers have developed many ways to combat common agricultural pests. These methods range from using pesticides and setting up traps to introducing predators to the area. This article will explore the common insects that farmers and gardeners have to combat.

15 Examples of Insects That Destroy Crops

Here are 15 examples of insects that have wreaked havoc on crops. Let’s learn about these species and what crops they destroy.

The Desert locus is found mostly in Africa and West Asia, however, they are expanding to South Asia and western Spain. With their strong wings, they can migrate over long distances to new areas. Combined with their tendency to swarm together and feed on various green vegetation, they can cause extensive damage to crops over large areas.

These insects are often pinkish or greenish in their early years and turn yellow or grayish as adults. They often have various patterns on their wings. Their size ranges from 0.2 to 4.3 inches.

Bean aphids are one of the most widely distributed aphid species. You can find them in the temperate habitats of North America, Western Europe, and Asia or cooler areas of South America, the Middle East, and Africa. They are black to dark green with light legs and grow around 0.07 to 0.09 inches in length.

These insects are a typical pest for beans but can also harm asparagus, carrots, corn, parsnip, squash, spinach, lettuces, and rhubarb. They can stunt growth, reduce plant vigor, deform plants, and transmit viral diseases. Besides using insecticides, you can also release their common predators into the area to reduce their populations. These predators include ladybird beetles, parasitic wasps, and syrphid fly larvae.

The Mormon cricket is large and grows to almost 3 inches long. They come in various colors ranging from green and brown to red, purple, or black. They can also have colored markings and stripes on their bodies.

These insects got their name for when they were the biggest pest invading Mormon agricultural farmlands during the 19th century. Since they are flightless insects, you can control them through insecticides or create physical barriers around crops.

Japanese beetles are a species of scarab beetle native to Japan. They were accidentally introduced to America in New Jersey in 1916. They are a big threat to crops because they feed on over 300 various types of plants, including beans, raspberries, and grapes. They also live on and attack plants in groups, causing severe damage at once.

These insects grow up to 0.6 inches long and 0.4 inches wide. They often leave a signature lacy skeleton on the leaves they chew and damage. You can control and prevent Japanese beetle infestations by handpicking them, using drop cloths, applying insecticides, or protecting plants with row covers.

As their name suggests, the Tomato hornworm’s favorite crop is tomatoes. They also get their name from their horn-like tail. These large caterpillars can grow up to 5 inches long. They can chew the leaves until the plant is bare and eat holes in the fruit. The only way to combat them effectively is through physical removal.

The Giant Coreid bug is native to sub-Saharan Africa and Iran. These sap-sucking insects are considered major pests for agricultural plants, including legumes, cowpea pods, and cassia. They feed by injecting their saliva with digestive enzymes into plants, causing the plant to wither so they can suck the juices. This is why they are also known as twig wilters.

This species can grow to around an inch in length. They have small heads with elongated bodies and thick hind legs. There is also a stink gland between the middle and hind legs.

Rice green leafhoppers are the main destroyers of rice plants, especially in the temperate regions of Asia. They will suck the sap out of the plants as well as spread viruses and diseases.  Plants will often look discolored, stunted, withered, or completely dried out due to their feeding.

These insects are most active from July to September. They are bright green with various black markings on their bodies. Male adults will have a black spot on their forewings, unlike females. They can grow between 0.12 to 0.19 inches long.

The Banana Stem Borer weevil is a major pest for banana and plantain crops. The adults tend to feed on tree trunks or leaves, while their young feed on the roots. Infestation usually starts when plants are 5 months old and results in wilting and death of plants.

These insects are strong fliers and will move from plant to plant during the night. They are black as adults but can start as reddish-brown in color. Although native to Indonesia and Malaysia, you can now find them in various Southeast Asian countries, Australia, the Pacific Islands, and the Americas, including Florida and Hawaii.

The Coffee white stem borer is a species of beetle with elongated black bodies and white bands on their wings. They can grow between 0.78 to 0.98 inches long.

These insects are major pests destroying coffee plants, especially in countries like Nepal. Their favorite plant is Arabica coffee. Infested plants will show ridges on the stem, wilting, and yellowing before dying off within a year. There are various ways to manage their infestation, including spraying pesticides and using a pheromone trap to catch female adults during flight.

The Corn rootworm is one of the worst insects destroying corn throughout North America. Sandy soils can combat the larvae of this insect since they prefer smooth and moist soils that won’t cut them as they search for corn roots to feed on. These insects grow to around 0.3 inches in length and adults are typically greenish to yellowish.

You may also like:  Octopus Vs Squid (9 Differences With Pictures)

Brown marmorated stink bugs are a serious pest destroying various vegetables and fruits, including apples, figs, beans, tomatoes, soybeans, and peaches. They can also be a pest in homes as they enter houses for shelter during the fall.

Originally from Japan, China, and Korea, they were first introduced into America in eastern Pennsylvania. You can now find them throughout eastern and western North America. They are various shades of brown and grow around 0.66 inches long.

Grass thrips are small insects with narrow bodies around 0.06 inches in length. Some have wings and some don’t. Winged Grass thrips have four wings.

These insects will lay their eggs on or under leaves, and both youngsters and adults will suck the sap out of plants, causing them to curl up and crumble. They feed on various plants such as beans, tea, cotton, squash, and onions.

Although the Colorado Potato Beetle is a serious pest for potatoes, they can also infest pepper, tomato, and eggplant crops. They will significantly reduce yield as well as kill the plants. These insects are known for their ability to develop a resistance to insecticides. So, it’s important to rotate the type of insecticide you use against them or actively handpick them from plants.

Adults grow around 0.375 inches in length and are typically yellow-orange with yellowish-white wings. They also have about 10 narrow black stripes on their wings.

Pink bollworms are known to bore into the shoots of plants, causing them to droop or dry. They can cause 20 to 90 percent of crop yield loss, such as cotton, okra, hibiscus, and kenaf. You can find these insects mostly in the southwestern states of the U.S., with its first detection in Texas in 1917. As their name suggests, they are light pink with darker striped markings.

Squash bugs are a species of coreid bug, more commonly found in North America. They are smaller than the Giant Coreid bug, growing to around 0.6. inches long. Their coloring is typically dull tan with dark pits.

During the spring, these insects will lay eggs on the leaves of squash, cucumber, pumpkin, or melon plants. They suck the sap out of the leaves, fruit, or stem to feed, leading to yellow or brown spots on larger plants. Young plants can die due to their feeding. The two main forms of control for the Squash bug are using insecticides or destroying their hibernation spots, such as debris they shelter under during the winter.