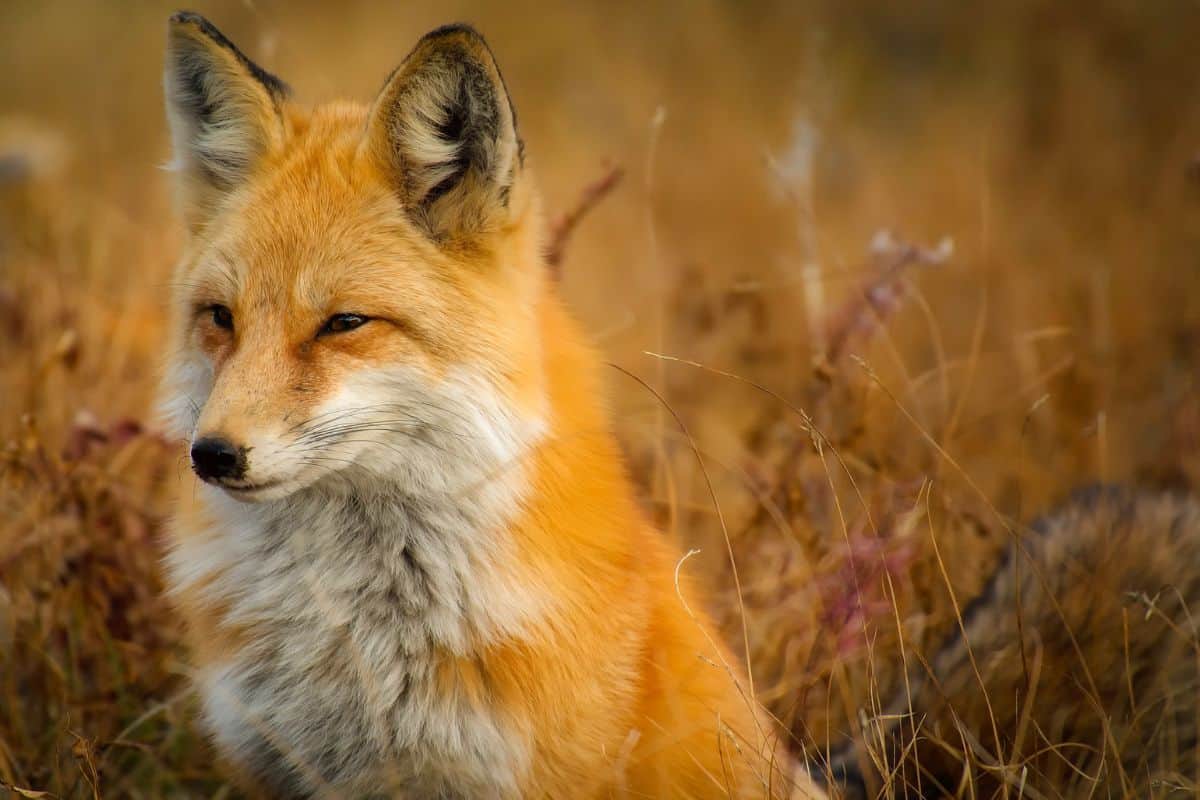 The fox a part of the canidae family. Animals in this family are sometimes described as canids, canines, and may even be referred to as dogs! Like all canids, foxes are born blind and walk on their toes.

Foxes can be found across the globe, with species living in Asia, Africa, Australia North America, and Europe. There are 12 true fox species in total.

Many canines are pack animals, but foxes are solitary and spend most of their time alone. When raising their young, foxes may live in small families called leashes or skulks. Foxes are primarily nocturnal, but can sometimes be seen during the day.

Depending on the species, a fox can be anywhere from 12 to 35 inches long! Although foxes are omnivores, they’re excellent hunters and can reach speeds over 30 miles per hour. It relies on its powerful hearing and strong sense of smell to find nearby prey.

Although the fox has many unique traits, it also has a lot in common with other canines, felines, and many other types of animals. Every one of these 15 animals shares several traits with foxes.

Why coyotes are like foxes: Coyotes are a fast, furry mammal that’s a part of the caninae family

Coyotes are North American mammal that is usually found in open habitats, like deserts and prairies. As canines, coyotes and foxes have many shared traits, such as lean bodies, thick fur, and bushy tails.

While coyotes are excellent hunters, they’re omnivores that will eat all kinds of foods, including fruits and vegetables, insects, and grass. Coyotes typically hunt alone, but they may also hunt in pairs.

Why dogs are like foxes: Not only are dogs and foxes both canines, but both animals are frequently featured in folklore

Dogs are famously loyal to humans, but foxes and humans have a strong bond as well. Research shows that foxes were domesticated by humans during the Bronze Age.

While domesticated dogs no longer need to hunt, dogs have powerful noses with more than 300 million receptors! In fact, a dog’s nose is so sensitive that it can even detect thermal radiation.

Why raccoons are like foxes: Both mammals are nocturnal and are known for getting into mischief

Just like foxes, raccoons are comfortable in urban environments and are sometimes considered to be pests! The name raccoon comes from “aroughgun,” a Powhatan word that means “animal with scratching hands.”

Raccoons have black mask-like markings on their faces that absorb light and help them to see clearly when they’re out during the day. As opportunistic omnivores, raccoons will eat just about anything and will even dig for food in the trash.

The weasel is a small nocturnal animal that is between 4 and 10 inches long when fully grown! In spite of its small size, weasels are carnivores that feed on animals like mice, frogs, and songbirds.

Similar to foxes, a weasel’s fur can be many different colors, including brown, black, gray, and red. A weasel’s body can’t store fat, which means this animal has to hunt constantly while it’s awake.

Jackals are a part of the canid family, which means they’re closely related to foxes! The jackal primarily lives in Africa, where it can be found in habitats like bushlands, mountains, and savannas.

Not only are jackals omnivores, but they’re willing to eat all kinds of different foods, ranging from insects and berries to reptiles and antelope. Jackals mate for life, and both parents work together to raise their young.

Why bobcats are like foxes: Both animals are solitary and have a powerful hearing

While a bobcat’s ears are much smaller than a fox’s, both animals have excellent hearing, along with strong vision and a powerful sense of smell. The bobcat is the most common wildcat in North America and usually makes its home in forests or swamps. Bobcats aren’t nocturnal, but they do most of their hunting in the evening and the early hours of the morning, when there’s very little light.

Why skunks are like foxes: Skunks are famous for being stinky, but foxes also have a strong, unpleasant scent

Foxes are able to secrete a strong odor from its scent glands that it uses to mark its territory and communicate with other foxes. Skunks also have scent glands, but they use pungent smells to scare off predators and other threats.

Like foxes, skunks are omnivores that make their home in underground dens. Skunks have long nails that allow them to easily dig holes in the ground.

Why wolves are like foxes: Wolves and foxes are both canines, and some species look very similar

Foxes are smaller than wolves, but the two animals look a lot alike, with narrow snouts and fluffy tails. While it’s common to describe someone as a “lone wolf,” wolves are actually social animals that prefer to hunt in packs.

Wolves have powerful noses with more than 200 million receptors and can hear sounds up to six miles away. The wolf is known for its howl, but the animal is an excellent communicator with many different vocalizations.

Why mountain lions are like foxes: Mountain lions travel alone and use their whiskers to navigate just like a fox does

Mountain lions and foxes have extremely sensitive whiskers known as vibrissae that allow them to detect slight changes in the surrounding air. Thanks to this trait, both animals are able to hunt effectively at night.

The mountain lion is a feline and can be found across North and South America. They’re excellent jumpers and can reach speeds up to 50 miles per hour.

Why dholes are like foxes: Dholes are furry canines that closely resemble foxes

The dhole is a type of wild dog that can be found throughout Asia. With its lean body, pointed ears, bushy tail, and red fur, it could easily be mistaken for a fox.

Dholes are extremely social and live in large clans of up to 40 animals. In recent years, the dhole population has been decreasing, and the animal is currently listed as endangered.

You may also like:  7 Types of Animals That Go Through Metamorphosis

Why cats are like foxes: Both animals are nocturnal, have whiskers, and can retract their claws

Cats are the only domesticated feline and are still capable of surviving in the wild. While it’s easy to spot the whiskers on a cat’s face, cats also have whiskers on the back of their legs, a trait they share with foxes.

A cat can reach speeds up to 30 miles per hour and can jump up to eight feet! However, the typical cat spends most of its time sleeping.

Why mole rats are like foxes: Like foxes, mole rats live in underground dens and can sense the Earth’s magnetic field

The mole rat might not look much like a fox, but both animals have a sixth sense that allows them to detect magnetic fields. While foxes use this ability to detect prey, mole rats use this skill for navigation when moving underground. Mole rats burrows have rooms that are designed for specific purposes, such as breeding and nesting.

Why culpeo are like foxes: The culpeo isn’t a true fox, but its fox-like appearance has earned it the nickname “Andean fox”

At first glance, you might assume that a culpeo is a fox. These animals closely resemble foxes, but they’re more closely related to jackals and and wolves.

The culpeo is native to South America and can be found in many habitats, including deserts, rainforests, and plateaus. Culpeos are opportunistic predators and will eat almost any type of prey.

Why red pandas are like foxes: Both mammals have pointed ears, red fur, and long tails

Although red pandas look like they could be related to foxes, this small mammal’s closest relative is actually the raccoon! Red pandas are solitary animals that live in China and the Eastern Himalayas.

Even though the red panda is technically a carnivore, it primarily feeds on insects and bamboo. There are currently less than 10,000 red pandas in the wild, and the species is classified as endangered.

Why margay are like foxes: Margay are solitary, nocturnal animals with leg whiskers

Margay has thick, plush fur, pointed ears, and a long tail just like a fox does. The margay is native to Central and South America, where it makes its home in forests.

It spends most of its time in trees, but it will walk on the ground when it’s hunting at night. The animal is an omnivore that feeds on lizards, birds, fruit, and grass.