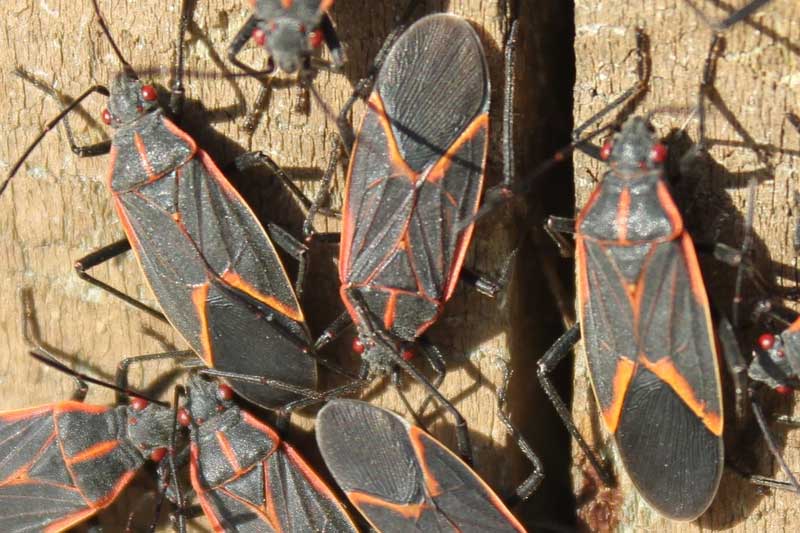 The good thing about boxelder bugs is that they typically won’t harm the home they’re found in. The bad thing is that they smell awful and their swarms can grow to cover doors, windows, and other surfaces.

Boxelder bugs live outdoors, lay eggs outdoors, and only eat food provided by boxelder-type trees. They only come inside seeking heat. This is the same reason you might see them clinging to siding exposed to the sun during the summer.

There are quite a few effective ways to get rid of boxelder bugs without harming your home or their host plants.

6 tips to help you get rid of boxelder bugs

1. Seal Up Your Home

If your home is close to a food source, boxelder bugs will flock to it in droves at the first sign of a chill. To prevent them from gaining access to your home, all you need to do is seal it up. However, since boxelder bugs are so small, you need to make sure to do a thorough job and use specific materials.

Boxelders don’t tend to chew through anything, like mice or wood-boring insects. Instead, they’ll try to squeeze through gaps and find any hole in the exterior of your home. If they can’t find a gap, the entire swarm will move on.

Using a fine-mesh screen on windows and in vents can make a large difference without impeding airflow. Expandable foam may be used to seal cracks around siding and the base of your home.

Steel wool will discourage any insect from crawling over or through it. Replacing weather stripping and other seals that have begun to crack or deteriorate is also necessary to keep pests out. Sealing up as many things as possible will help keep all kinds of pests out of your home, boxelder bugs included.

Boxelder bugs are picky eaters. They live off of the seeds dropped from boxelder trees. These trees include maple and ash, or any tree that drops “helicopter” seeds. These seeds are punctured and eater by boxelder bugs.

Removing these trees from around your home is a good way to reduce large boxelder bug populations. However, many homeowners are reluctant to remove trees from their property.

An alternative solution is to remove the seeds and leaves these trees drop as soon as possible. Raking up and disposing of these seed pods will deprive the boxelder bugs of the food they need.

If no boxelder trees are available, it’s possible that boxelder bugs will also be attracted to ripening fruit, particularly strawberries. Removing any excess fruit or placing nets over the plants can help reduce boxelder bug populations.

This will encourage them to move to another host plant before winter arrives. The less food they have, the farther away from your home they will be and less likely to move in once winter comes.

Boxelder bugs are easily drowned, being a somewhat fragile bug. A power washer or high-pressure attachment for the typical garden hose makes it easy to spray these bugs off of siding or windows. If you do this before they find an opening, they won’t make it inside.

You may also like:  The 3 Stages of the Cicada Life Cycle

If you plan to vacuum up these bugs, be sure that they have died and won’t crawl back out of the vacuum later. Do this by either soaking the vacuum bag after you’re done or dumping the canister and spraying the debris with water. You can also freeze the bag or place it outside if the temperatures are below freezing.

Concentrated dish soap added to a little bit of water in a spray bottle can make an effective, non-toxic spray for indoors or outdoors. This concoction can be sprayed on host plants, in shady areas, and won’t damage them if done sparingly.

Any boxelder bugs that encounter this soapy solution may suffocate, due to the effect soap has on waxy-bodied insects. If you spray the bugs directly, they will likely die almost as soon as they come in contact with this solution.

If you have any boxelder trees on your property, or expect to combat a large infestation, buying this soap in bulk can save you time and money. Dawn Dishwashing liquid is particularly effective at clogging up the vents on the body of boxelder bugs, while Puracy can be a more natural alternative.

5. Discourage Boxelders From Nesting in Your Yard

In addition to removing the seeds boxelder bugs like to feast on, consider cleaning up any debris they might like to hide or nest in during the warmer months. The less hospitable your yard is, the more likely these bugs will go somewhere else.

Piles of leaves, dead vegetation, rotting fruit from trees and bushes are the first things that need to go. Empty birdhouses, an empty mailbox, and even the cracks between the doors and windows of your garden shed are all places a nest of boxelder bugs can be found.

6. Create a Barrier of Diatomaceous Earth

Diatomaceous earth can be poured near doors, windows, the base of your home, around trees, and anywhere else you see boxelder bugs. This fine, chalk-like powder will create microscopic tears in the body of a boxelder bug that walks over it. The bug is then likely to quickly dehydrate.

This is an effective boxelder bug control method and one that won’t harm certain beneficial insects, like honey bees and earthworms. Though it can keep other pest-type bugs at bay.

One important thing to remember is that this powder is only effective when it’s dry. Damp diatomaceous earth doesn’t have the same power to tear at bugs and cause them to dry out.